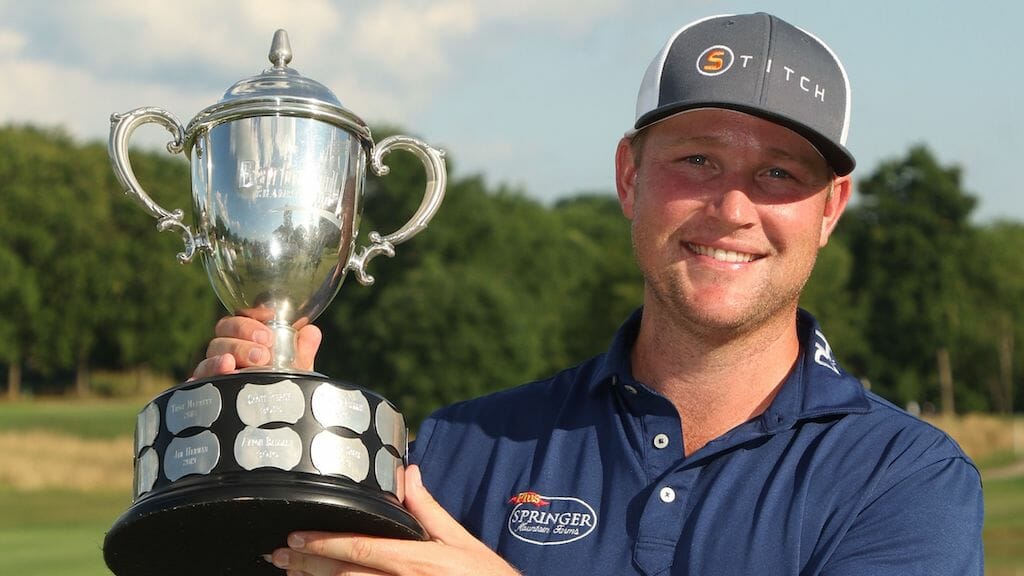 Trey Mullinax birdied the 72nd hole to win the Barbasol Championship by a single stroke at Keene Trace Golf Club, securing exemptions on both the DP World Tour and PGA Tour.

The American, who started the final round three strokes behind 54-hole leader Matti Schmid, battled with playing partner Kevin Streelman down the stretch as the pair exchanged blows in glorious sunshine in Kentucky.

They were neck-and-neck on 24 under par standing on the 18th tee and both found the green with their second strokes, Streelman just inside Mullinax’s approach. Putting first, Mullinax holed his effort from 15 feet for a final round 66 and a 25 under par total, leaving his compatriot with a birdie putt to force a sudden death play-off.

“It was a long day today, it was a grind,” said Mullinax. “But we stayed sharp, we stayed focused pretty much all day. We knew it was going to be a grind, we knew we were going to get wore down, but we had to just keep at it, keep firing and at the end of the day I walked away with the low score.

“When I got on 18, me and my caddie, what do we need to do. He said, You and Kevin are tied. I said, What’s everybody else? We tried to just really focus on what we were doing. He let me know that information, but at that point it’s almost playing match play against him. I hit a great drive on 18 to set me up for a great second shot.

With his victory, Mullinax also secured the final place at The 150th Open at St Andrews as part of The Open Qualifying Series.

Mark Hubbard carded a seven under par 65 to finish third on 22 under par, while Germany’s Hurly Long was the best-placed DP World Tour member one stroke back in fourth place after following his nine under par 63 from this morning with a one under par 71.

The trio of Ricardo Gouveia, Marcus Helligkilde and Matti Schmid finished in a share of eighth on 18 under.