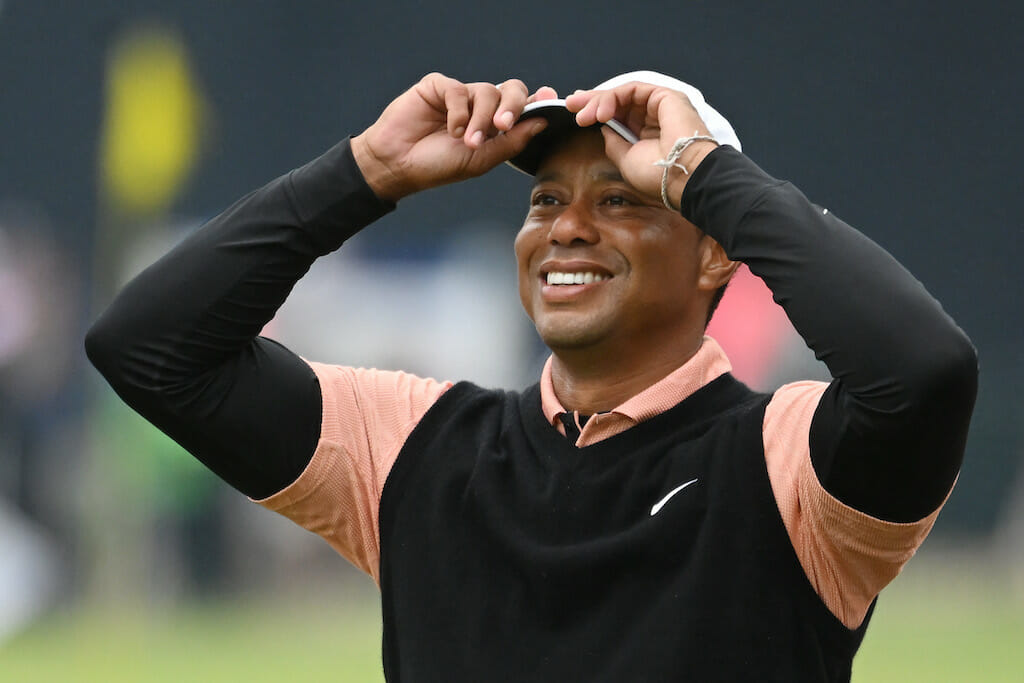 Three-time Open Champion Tiger Woods has raised serious doubts if he will be fully fit to tee-up in this week’s 150th hosting of the Open Championship.

Woods was joined by good friend Justin Thomas in playing 17 holes of the famed Old Course earlier today, starting from the 2nd tee that is close to the practice range, and the range located at the New and Jubilee courses clubhouse that is used each year for the Dunhill Links Championship.

Woods was walking very gingerly off the tees as well as in climbing parts of the course and then more noticeably in negotiating the handful of steps at the back of the 18th green of the Old Course.

‘TW’ is a two-time Open Champion at St. Andrews winning in 2000 when he was not in a single bunker over the four rounds and then again in 2005 here at the Home of Golf.

Woods’ politely declined to talk with the waiting media, given he is attending an official news conference on Tuesday, and with Thomas happy to chat with accredited journalists.

“Yeah, his swing still looks as good as ever, it does,” said Thomas when asked about Woods’ game.

Thomas was also asked if he would be surprised if he challenged this week?  He replied: “No, not at all.  I’ve learned better than to challenge anything about him.”

With Thomas now heading off the course, he was also asked if he had been picking Tiger’s brains on how to play the Old Course?

“Yes, I’ve been picking his brains a little bit. I understand that he’s going to be a little withholding of some information.

“But I’m trying to needle it out of him and get as much out of him as I can. Because he’s done pretty well around this place.”

Thomas is contesting his sixth Open but a first at St. Andrews and was asked his own thoughts on the Old Course, and how he sees his own chances.

“The course could somehow turn into a potentially defensive golf course rather than the opposite, as the fairways are already firm but if the greens end-up getting baked and as firm as the fairways, and with how they can position some of the pins, you are not going to hit the ball close.

“So, it’s going to take a lot of discipline and a lot of shot-making, and a lot of patience from what I saw out there today.  That being said, if we happen to get a 5 to 10 mph wind like today then you can still make a lot of birdies but I just know how different links golf courses can play and I can already see how different this place can play from walking it again.

“I am thus not going into the championship with any expectations”.