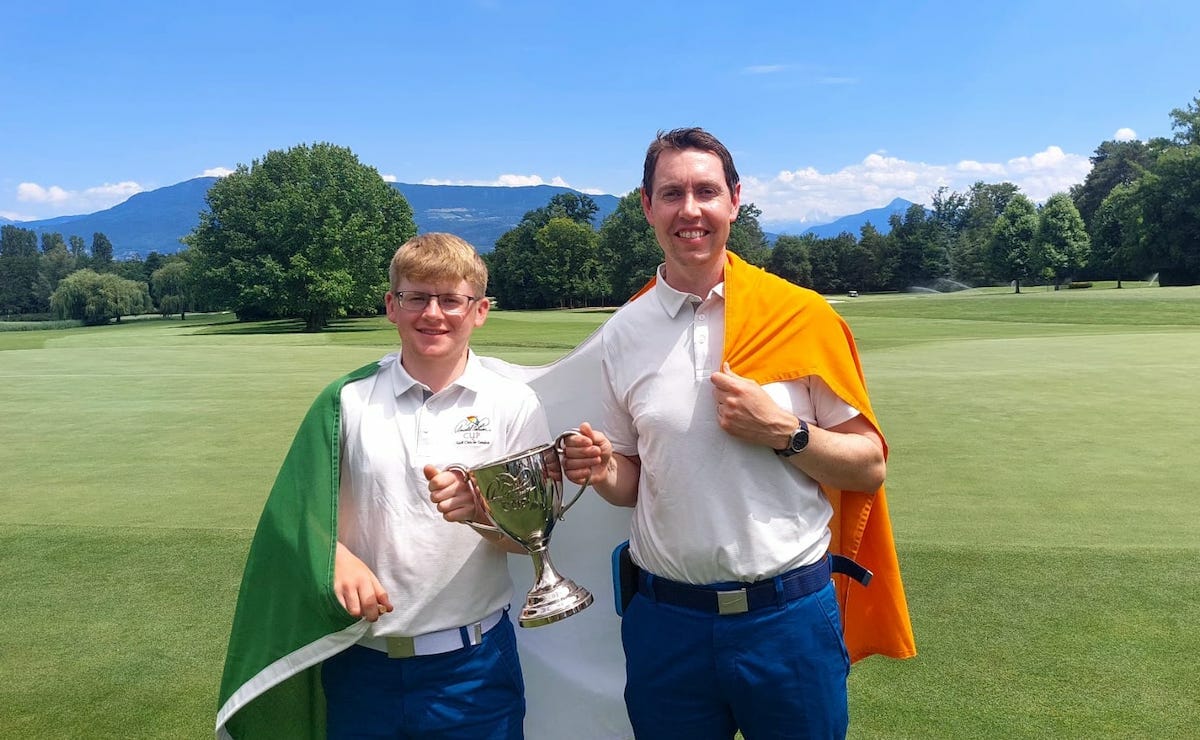 David Kitt might have lost his day three singles match against Jake Doggett but he was left smiling in the end after a storybook final round on Sunday. Team International side rallied on the final day claiming 15 of the 24 singles matches as they defeated Team USA 33 to 27 to capture the 2022 Arnold Palmer Cup at Club Golf de Geneve.

Maynooth University’s Kitt went down 1UP to Doggett in a match he never lead in. The Athenry native battled back from 2 DOWN through eight holes to level affairs after ten.

The match was all square with five to play but Doggett took the match away from the R&A Student Series champion with a birdie on 14 and pars on 15 and 16. Kitt who was the second Maynooth student to represent the Internationals after close friend Allan Hill last year made a par on 17 to close to within one but a par on 18 wasn’t enough to snatch a half

Julia Lopez Ramirez carded Team International’s first of 15 singles victories on the day. The 2022 SEC Freshman of the Year birdied five holes, including 4-6, to defeat Brooke Seay 4 & 3 in 15 holes

“I’m so happy for this and the team,” she said. “I know I’m around great people that treat me very good.

“Heading into this round, I had lost all three of my matches before, so I knew that I had to really step my game up,” Lau said. “After being 2-down through three, I thought that I just needed to play my game and take it one shot at a time. I’m very honored to be here and am looking forward to the Swiss chocolates.

Another key match that was halved was between Ludvig Åberg and Nick Gabrelcik. They traded wins multiple times on their back nine, including a Gabrelcik eagle on the par-5 fifth, but it was Åberg who led during 17 ofthe 18 holes played.

“If you look back at the players who have played in this tournament before, it is a testament to how strong college golf is and where it’s headed,” said Åberg, the 2022 Ben Hogan Award winner. “A lot of the people who played this week will do great things on the pro golf circuit as well, so being able to win as a team is fantastic.”

Each year, a man and woman are voted upon by their peers to receive exemptions into the Arnold Palmer Invitational presented by Mastercard and Amundi Evian Championship. The 2022 recipients were Åberg, Aline Krauter, and Benedetta Moresco.

“This exemption is literally perfect,” Åberg said. “For what he did for his legacy and this sport, it is great to get associated with Mr. Palmer.Anytime that you can test the waters before you’re going to do it for real helps tremendously.”

Aside from the exemptions, one player from each team is chosen by their peers to receive the Michael Carter Award.

On February 13, 2002, former Penn State University golfer and GCAA Arnold Palmer Cup intern Michael Carter died in an automobile accident at the young age of 19. While Carter tragically left this world too soon, his infectiously fun-loving spirit will forever live in this competition. The Michael Carter “Junior” Memorial Award is presented to the Arnold Palmer Cup participant from each team who best represents the qualities and ideals that made this young man unique

The 2022 recipients were James Leow and Cole Sherwood.  Mateo Fernández de Oliveira and Amari Avery won every match they played in this week.