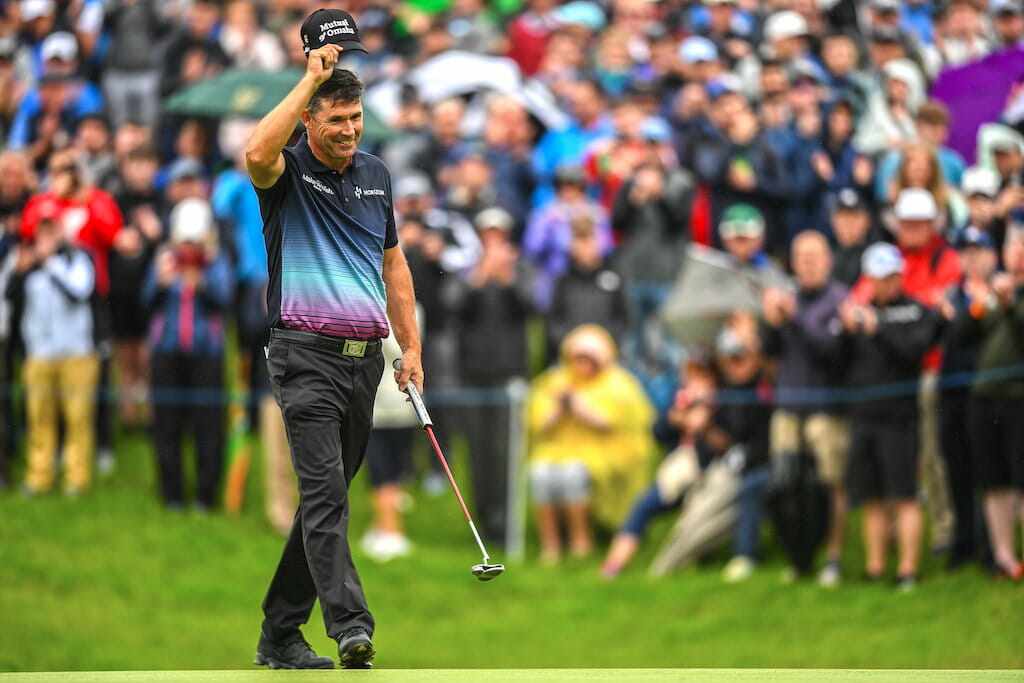 Pádraig Harrington admits he has no problem with anyone who signs for LIV Golf and insists that those players who are banned from the PGA and DP World Tours should still be allowed to participate in the four major championships.

Harrington was speaking after his second round 71 at the Horizon Irish Open which has him inside the projected cut mark at the time of writing at three-under par. And the U.S. Senior Open champ addressed the statement issued by the DP World Tour defending “proportionate, fair and necessary sanctions” imposed against LIV players after they were threatened with legal action.

The three-time major champion believes that in time, the separation of the three tours could be good for men’s golf’s four flagship events.

“Friends of mine have gone to play there,” said Harrington. “I am comfortable with them going to play there, they have made that decision. There is great money there, it looks like LIV is here to stay and the rest of golf is focusing on themselves to make themselves better.

“Let LIV go and do their thing. I think it is good for golf having competition and other tours and I think there could be room for it. Anybody who went expected this while they might have hoped for something different.

“The players who haven’t gone who could have felt the sanctions haven’t gone far enough, 100% the European players feel that way. I wouldn’t want them to be banned from playing majors.

“It might take 5 or 10 years before the separation is normalised but I wouldn’t advocate not letting them into the majors if anything they could make the majors bigger and better by having the best players coming from around the place and only playing together in the majors,” added the 50-year-old who has not received an offer.

However, as it stands the LIV Golf events do not award world ranking points to the players that participate meaning that the likes of Dustin Johnson, Brooks Koepka, Bryson DeChambeau, Patrick Reed and Sergio Garcia will eventually fall outside the OWGR top-50 and therefore be ineligible to compete in the future depending on exemptions expiring too.

“The majors are golf so I never want to see the majors effected. The separation is good for the majors,” explained Harrington.

“It’s completely different than your allegiance to a tour so I wouldn’t push the sanctions against majors. It would be pretty cool from the outside in two or three years you could have Rory going up against DJ and that could only happen in the majors which is pretty cool for the majors.”

Back to matters on the course and Harrington birdied the 8th and 9th holes to move inside the cutline at three-under after his second round of 71.

The 2007 Irish Open champion feels he played well enough to be in contention and didn’t realise he was flirting with danger until midway through his back nine.

Having got to four-under after birdies on 12, 16 and 17, and with a bogey on 14, things began to go against the Dubliner on his way home. A bogey on the short par-4 4th was followed by a three-putt par from just short of the par-5 5th and he had to take a penalty drop from under a tree on the 7th that led to a double-bogey which saw him slip to one-under before his big finish.

“If I look at the first two days I should be eight-under-par, I played fine,” he said. “I never thought I was struggling to make the cut until I was struggling. I played comfortable, hit a carless shot on the fourth hole and made bogey and three putted the fifth and all of a sudden I didn’t hit a good shot into seven and made double bogey.

“I went from thinking I could get myself to six-under and well in this tournament to struggling to make the cut which is kind of the way it has been for the last number of years. I suppose off the back of last week you are a little more positive I hit two great drivers up the 8th. It was playing really long and I chipped it to 15-feet and holed it.

“On 9 I hit a nice tee shot, thought the second shot would get over the hill and I gave it a good run at the hole and in she went.

“I was enjoying the crowds I hope they were enjoying my play. I’m not too sure how many are going to get up that early in the morning but hopefully it will be nice at an Irish Open it is worth it if I am here for the weekend.”