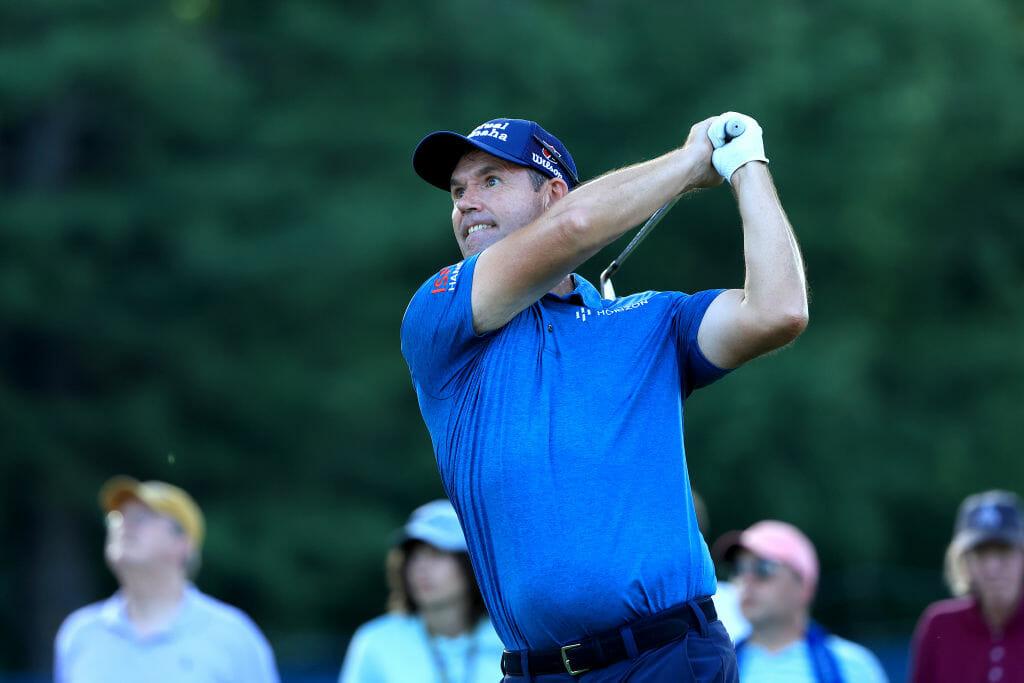 Padraig Harrington plays a shot on the 17th hole during the third round of the U.S. Senior Open Championship at Saucon Valley Country Club on June 25, 2022 in Bethlehem, Pennsylvania. (Photo by Sam Greenwood/Getty Images)

Pádraig Harrington lauded the large crowds for helping him maintain his energy levels on the golf course as he shot an opening 70 to lie on two-under after the first round of the Horizon Irish Open.

Mount Juliet was playing host to a full house at the Irish Open for the first time since 2019 – having capped attendance at 5000 last year – and the biggest roar of the day came for Harrington as he emerged through the arch and onto the first tee to a hero’s welcome.

Harrington had only arrived home on Tuesday following his brilliant US Senior Open win on Sunday and he was battling fatigue and jet lag after a hectic couple of days but he insists the support of the Irish fans gave him a much-needed boost.

“It really was great,” Harrington said of his reception. “It’s a big crowd well behind me. There was a bit of a buzz, and I played nicely all the way through, so it was okay. It’s important to play nice when you have the home crowd. And, yeah, hopefully I can deliver a little bit more tomorrow, but I think the crowds are helping.”

The three-time major champion was announced on the first tee as the Senior US Open champion which drew another bellowing roar from the gallery and he feels the home support was key in ensuring he didn’t allow himself to fall flat and play himself out of the tournament.

“I kept myself in the game enough, and the crowds were certainly there helping me. So, yeah, I was okay today I would have said. I think 2-under is okay, but like if you’re any worse, you would be very flat going in tomorrow. At least at 2-under I still have an opportunity to go forward.

“And as I said, it is important, when you come off a week like that week, that you keep momentum going. And, you know, today, it’s certainly no disaster. I think there’s plenty guys who went low, and you see that, and hopefully I can be one of those guys tomorrow.

“The crowds are great. Yeah. You know what, I hit enough good shots that there was a nice buzz about it, both my play and practice, we’re enjoying that fact, Lucas was saying it was as big as he’d seen any individuals sort of out there, so it was really nice support. Nice to get it. And, look, I always get the support here at home, and maybe today was a little bit bigger than normal, but it’s very much appreciated,” explained the 50-year-old.

The 2007 Irish Open winner was a little erratic early doors finding the thick rough on the first and fourth holes but displayed an excellent array of pitching and chipping to get to one-under through the first five holes.

Concerns over tiredness were far from his mind when he rolled in birdie efforts on the 8th and par-4 13th. While he picked up a fourth birdie of the day on the 17th he was unable to get up and down from the back of the 16th and the bunker on 18 for pars and those two dropped shots left a slightly sour taste in his mouth.

“I think at the end I was hoping, you know, coming in, I was kind of thinking when I got to 3-under par if I could get it to 4 would be a really good day.

“Disappointed to drop the shots at the end. You know, I knew there would be tough patches in this week no matter what. Yeah. So I get a good night’s sleep, come back tomorrow and hopefully get a good run tomorrow.”