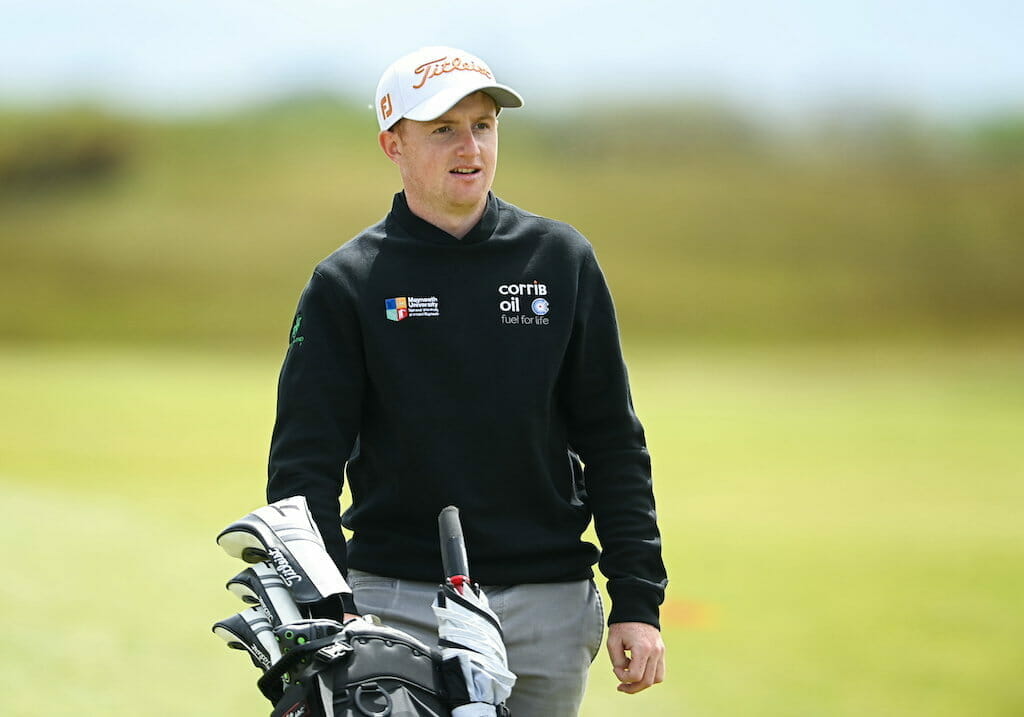 While some players might get carried off in a wave of sentimentality surrounding the significance of the 150th Open, Galway’s Ronan Mullarney is determined not to be one of them.

The 26-year old came through 36-holes of qualifying at Prince’s Golf Club to earn one of four spots on offer into the final men’s Major of the year next month and although Mullarney can anticipate the magnitude of the occasion, he also recognises the seismic opportunity that lies in wait.

A EuroPro Tour regular, Mullarney’s transition to the professional ranks coincided with the arrival of Covid. As a result, his playing schedule was ravaged and opportunities to progress up golf’s ladder went with it.

This season, Mullarney’s playing regularly and results have steadily improved. He recorded two encouraging finishes in June, a T12 at Donnington Grove and a T23 at Studley Wood. He earned £700 for the former and £426.50 for the latter… before expenses. Throw in a missed cut either side and things start to get expensive, fast.

So yeah, if you didn’t know it already, it’s not easy to make ends meet on golf’s satellite tours but it’s this grounding in reality that informs Mullarney’s outlook upon booking a ticket to St Andrews, and it’s safe to say, he’s not going to make up the numbers.

“If I’d qualified for this as an amateur, in my opinion it would be a free roll of the dice,” Mullarney explains, “but qualifying as a pro, you have to remember that we’re playing for a max prize of £12.5k on the EuroPro every week, and that requires really good golf to win. If you make the cut at The Open, I don’t know what it is but it’s more than £12.5k!

“Of course the occasion is going to be special, but I have to earn a living. I’m not there just to soak it all in.

“I’m sure there’ll be an element of that but I’m going to try and get there early enough to tick that box so I can try and concentrate on competing as best I can when I get there. It’s a massive opportunity.”

Mullarney didn’t put his game through the mill on Tuesday just to advance to St Andrews content.

“More than anything, the motivation is pride in performance for me – I just want to play well,” he says.

For 36-holes at Prince’s he did just that. Rounds of 70 and 71 saw him post a three-under par target in the clubhouse but when Mullarney had finished up for the day, there was no guarantee that his score would prove enough to qualify, at least not without a playoff.

“They were the worst two hours of my life,” he says, albeit able to laugh about it now.

“It was miserable because I just didn’t know what to do with myself. When I shot three-under, it was still very early in the day. I was confident I’d be in a playoff but I didn’t know if I’d qualify automatically.

“People kept asking me did I go hit balls but I was done so early that if I went to hit balls then, I would’ve been completely worn out if there was a playoff.

“As the time passed by, the adrenaline was leaving my body and I was getting more and more sore. I didn’t know what to do but by God I was delighted I didn’t have to play more golf!”

As it happened, Mullarney avoided the subsequent five-way tie for the last spot at St Andrews by a single stroke. Cue pandemonium as his phone nearly caught fire with the amount of well wishes flooding in.

“I’ve never, ever had that amount of messages in my life. I can’t even tell you how many, it was incredible,” he says.

“Even the amount of people who were tuned into it. People who you may have played with once, you may know them roughly from school years back, and all of a sudden they’re sending you messages and I’m thinking ‘I’m surprised you even remember my name!’

Not to get ahead of ourselves, but few men teeing up at the Old Course in July will do so with winning course form. Sure, Tiger Woods might boast a couple of Claret Jugs at the Home of Golf but the 15-time Major winner never won the R&A Foundation Scholars Tournament; a feat Mullarney accomplished in brutal conditions when coming through 54-holes in 2018 to book his place in the Palmer Cup.

Much has been made about the test the Old Course will serve up to players in July. Will it be long enough? Will it withstand a new breed of golfer? Will the classic design prove the great equaliser for those taking their chance in the field?

“The way they set it up the year I won, certain holes played forward but I would say I’ve played it in pretty much every condition, tees, wind direction, weather, so that has to be a benefit,” Mullarney says.

“Do I reckon it’s a great equaliser? I think it all depends on the weather. If there’s no wind, there’ll be extremely low scores, but it could be absolutely brutal too so a good draw will be important.”

Mullarney has often excelled in brutal conditions, not least when winning his maiden home major as an amateur at the Close at Ballybunion. Ground-hurling was the order of the week in a howling gale in the Kingdom in 2019 but although results might suggest Mullarney would relish an unruly British summer slog next month, he maintains that the opposite is true.

“I don’t know what that is because I absolutely hate bad weather,” Mullarney laughs.

“I remember listening to Peter O’Keeffe before and he was saying ‘I hope it’s windy, I prefer those conditions’, and I’m thinking ‘jaysus, fair play to you Peter, but I’m hoping for good weather!’

“I honestly hate going out when it’s miserable.”

There’ll be no raining on Mullarney’s parade come tournament week from July 10-17 and with half of Galway already committing to make the trip over to St Andrews, whatever happens, Mullarney is in for a week he’ll never forget.