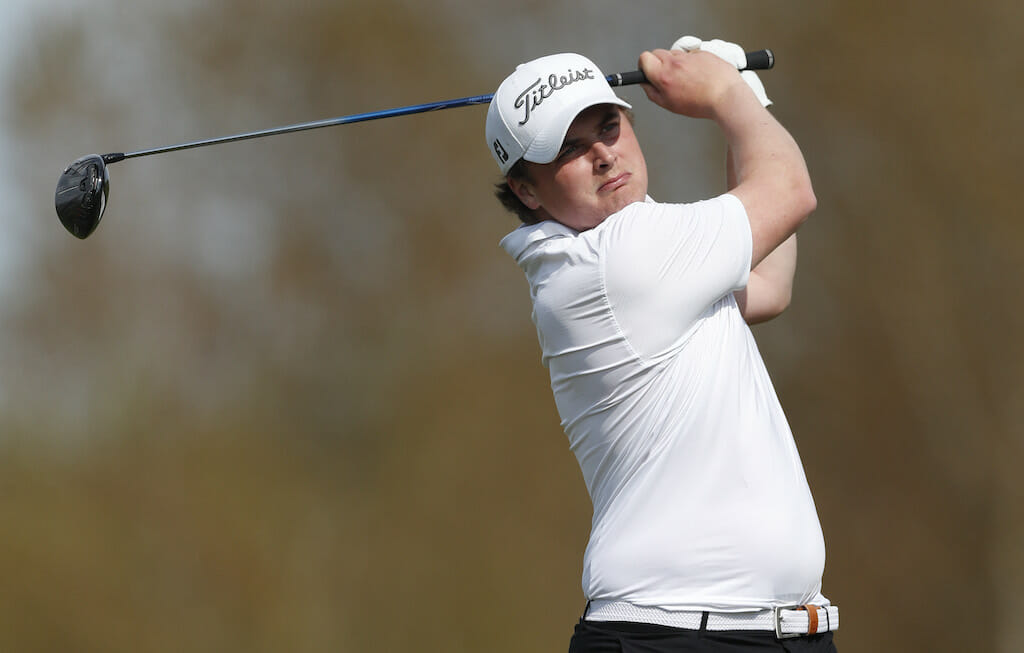 A late birdie surge means Mallow man James Sugrue will head into the weekend as the leading Irishman at the Kaskáda Golf Challenge in Brno, Czech Republic but his chances of winning are already decreasing rapidly.

After just a solitary bogey in the first 13 holes of his second round, the former Amateur champion strung together three straight birdies on his inward nine on his way to a second consecutive two-under 69 at Kaskáda Golf Resort to reach four-under-par for the week.

However, he is already nine shots adrift of leader Martin Simonsen of Denmark, who posted seven birdies and one bogey in a six-under 65 to move up to 13-under-par in the Czech Republic to take a one-shot lead into the halfway stage over Freddy Schott.

The German was the lowest scorer of the day as seven birdies in a bogey-free 64 took him to 12-under-par and into the final pairing on Saturday, with rounds of 65 and 68 from Victor Riu and Jeremy Freiburghaus respectively taking them to a share of third at 10-under.

Further down the leaderboard, Niall Kearney had an opposite experience to Sugrue in his round as he picked up his three birdies on his front nine before just one bogey on the back in a two-under 69 that has him two-under-par alongside Galgorm’s Tom McKibbin, who had four birdies but also a bogey and a triple-bogey on his card in a level-par 71.

Meanwhile, Conor Purcell had a very nervy wait after a round of 73 that included two double-bogeys, two bogeys and four birdies which left him at one-under which, fortunately, was right on the cut line to keep him in the tournament heading into the weekend.

It was a horror day for Paul Dunne, though, as the Greystones man entered the second day the leading Irishman at five-under, but he would bogey six of his first eight holes to drop back to one-over and then a quadruple-bogey eight at the par-four fifth ended his hopes of a weekend tee time after an eight-over 79.

The former British Masters champion finished at three-over, four shots too many to make the cut, while three double-bogeys contributed to Robin Dawson also missing the cut after a five-over 76 dropped him to three-over.

Charlie Williams bettered his first round score by ten shots as he ended his tournament with a two-over 73 and at 14-over-par for the week, while Gavin Moynihan withdrew before teeing off for his second round after suffering suspected food poisoning.