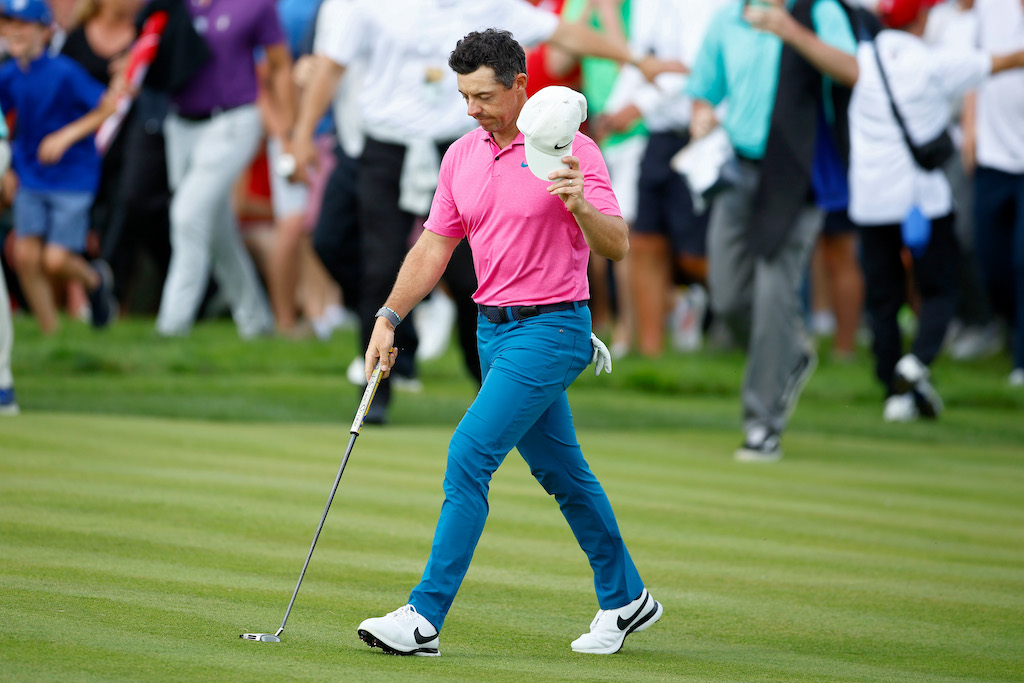 Double RBC Canadian champion Rory McIlroy took a ‘friendly’ swipe at LIV Golf CEO Greg Norman as he also heralded a return to having his head more in a yardage book.

McIlroy sensationally birdied his closing two holes to successfully defend the Canadian Open title thanks to a closing score of 62 for a two-shot 19-under par victory tally. The win is the 33-year old McIlroy’s 33rd pro career win and a 21st on the PGA Tour.
It is also one more victory on the PGA Tour than Norman, who won 20 times on golf’s biggest stage and McIlroy took great delight in highlighting he’s now won more PGA Tour endorsed tournaments than the player known as the ‘Great White Shark’.
He did this both immediately post his round and then in McIlroy’s victory conference.
“I alluded to it earlier but I had extra motivation out there this week and that’s what’s going on across ‘The Pond’,” said McIlroy.
“The guy that’s spear-heading that tour has 20 wins on the PGA Tour and I was tied with him and I wanted to get one ahead of him. And I did. So that was really cool for me, just a little sense of pride on that one.”
With stand-in caddy Niall O’Connor on the bag, who caddied once before for McIlroy at the 2019 DP World Tour Championship, McIlroy also suggested that he wants to get more ‘involved’ with his own game.
This was no more evident in the amount of time taken between shots that McIlroy spent studying his yardage book.
“Niall was great this week. It was the second time he’s caddied for me. We finished fourth in Dubai a few years ago and then finished first here,” said McIlroy. “So we’re doing okay. So any time that he needs to fill in for Harry I’m feeling pretty confident about that.

“But one of the things for me this week, which I don’t do usually, is I was pacing out all my yardage, writing all my notes down in my yardage book and just sort of — I was actually, JT and I were having lunch beforehand today and I was like, I had my head in my book a lot more today and was really into my shots and into my golf.

“Honestly, I think that helped. I take on a little more of the load, but I think it really helped in terms of my mentality and my approach to some shots. So I think I’m going to keep doing it at this point because I think it was helpful to do that again.

“I’ve sort of gotten away from that and rely on Harry quite a lot for that sort of stuff. But it was nice to get back into the yardage book this week.”

One aspect of last week McIlroy could not get away from was the remarkable out-pouring of support he enjoyed “North of the Border with two wins from two starts. There was a chorus of “Rory, Rory, Rory’ from the moment he walked onto the first tee till he left the course on Sunday afternoon.

“The support and the love I’ve got — I’ve only played in Canada twice, in Hamilton and then here. It’s been two pretty good trips”, he said

“But, yeah, look, the fans are amazing. They come out and they support this event really well. I think they just really appreciate the fact that we come up here and play in your national championship.

“Yeah, if there was some honorary Canadian citizenship bestowed upon me I certainly wouldn’t turn it down. That would be a very proud thing for me. But, no, I’m happy to come up here once every now and again and play some golf and take this trophy south of the border with me.

“Yeah, if there was some honorary Canadian citizenship bestowed upon me I certainly wouldn’t turn it down. That would be a very proud thing for me. But, no, I’m happy to come up here once every now and again and play some golf and take this trophy south of the border with me.”

RORY McILROY – WITH HIS WIN: