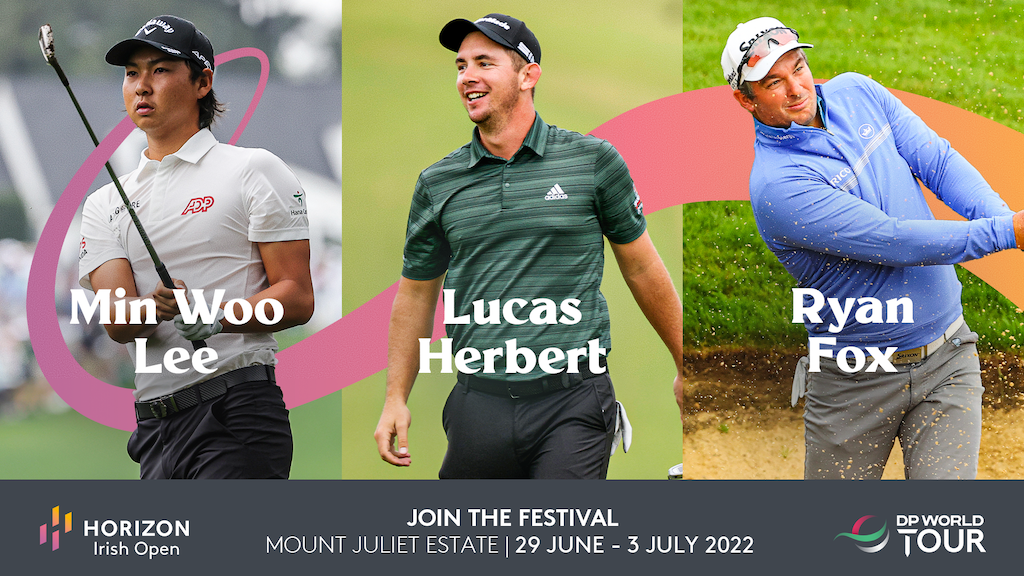 Lucas Herbert will return to defend his title at the Horizon Irish Open next month when he is joined at Mount Juliet Estate by fellow Australian Min Woo Lee, a Rolex Series champion at last year’s Genesis Scottish Open, and two-time DP World Tour winner Ryan Fox of New Zealand.

Herbert won his second DP World Tour title in wire-to-wire fashion in front of the returning Irish fans last year, sealing a three-stroke victory, and has since won for the first time on the PGA TOUR at the 2021 Butterfield Bermuda Championship.

The 26-year-old followed his triumph at the island of Ireland’s national open with a tie for fourth place at the Scottish Open, the second Rolex Series event of 2021, which was won by Herbert’s countryman Lee.

Herbert’s maiden PGA TOUR title, which he won by one stroke from New Zealand’s Danny Lee, cemented his place in the top 50 on the Official World Golf Ranking and earned him a debut appearance at the Masters Tournament in April.

He has enjoyed an unforgettable year since his victory at Mount Juliet and is excited to return to a venue which will forever hold special memories.

“Last year’s win at Mount Juliet was incredibly special for me and I am really looking forward to returning as defending champion,” he said.

“I will never forget that feeling of looking down at the trophy and seeing my name alongside some of the greats of the game. It started an amazing period for me and I now feel ready to kick on to achieve even more success.

“Even though it was a reduced crowd last year, the Irish fans created a fantastic atmosphere so to have the tournament at full capacity this year is exciting. Irish golf fans are some of the most knowledgeable and passionate in the world so to get the chance to enjoy the full festival experience is something I’m really looking forward to.”

Lee, who won his first DP World Tour title at the ISPS HANDA Vic Open in his homeland in 2020, secured a memorable first victory on European soil last year when he held his nerve to collect his maiden Rolex Series title courtesy of a play-off victory over Thomas Detry and Matt Fitzpatrick at the Scottish Open.

The 22-year-old – whose sister Minjee earned her second Major title at last week’s U.S. Women’s Open – will make his third Horizon Irish Open appearance later this year, hoping to better his tie for 17th place at Mount Juliet in 2021.

“I love playing in Ireland and especially at Mount Juliet, which is a perfect venue for an event of this magnitude,” said Lee. “The atmosphere is always incredible in Ireland which really makes a difference. I’m sure it will be an amazing week and I can’t wait to get back there.”

Fox came agonisingly close to winning the island of Ireland’s national open back in 2018 when the Kiwi was beaten by Scotland’s Russell Knox in a dramatic play-off, and the 35-year-old will return to Mount Juliet in confident mood having enjoyed a stunning run of form in the 2022 season.

His second Tour win at the Ras Al Khaimah Classic in February has been followed by four top tens in six appearances, including runner-up finishes at the Soudal Open and Dutch Open.

“The Horizon Irish Open is one event I’m really looking forward to playing this summer,” said Fox. “I’ve played well there in the past and obviously came very close to winning a few years ago, and the crowds have always been so supportive.

“Mount Juliet was a great venue last year and I’m sure it will be an even bigger occasion this time around with the return of full capacity crowds. It’s shaping up to be a great week.”

Prior to the 2021 edition, Mount Juliet had hosted the historic event for three consecutive years in 1993, 1994 and 1995, won by Englishman Nick Faldo, Bernhard Langer of Germany and Scotland’s Sam Torrance respectively.

It was announced in February that all general admission tickets for Sunday at the 2022 Horizon Irish Open have sold out, the earliest sell-out day in the history of the DP World Tour. Limited tickets still remain for the Wednesday Celebrity Pro-Am, as well as the first three tournament days – Thursday, Friday and Saturday.

General admission tickets can be purchased here and fans are encouraged to purchase in advance to avoid disappointment.