Maguire the beast in the East after stunning comeback victory 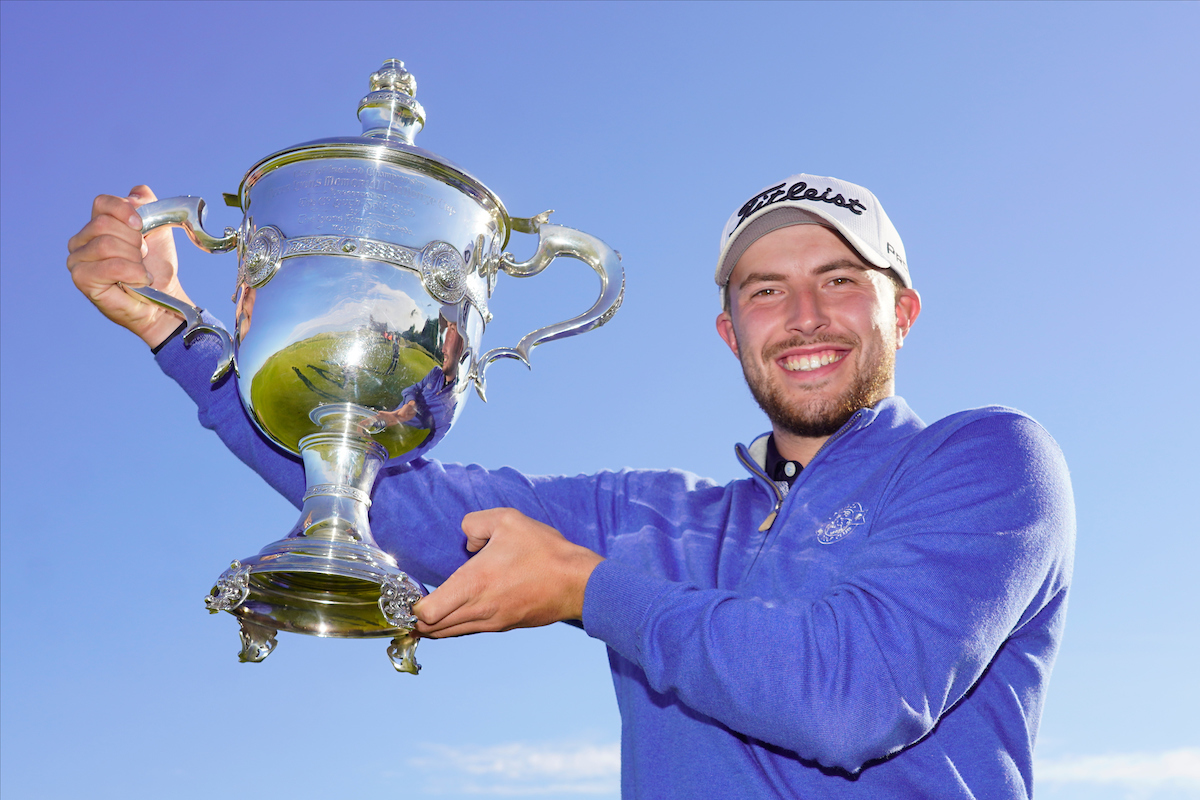 Alex Maguire is the East of Ireland Men’s Open champion after he came from ten shots back at the halfway stage to win on a thrilling final day at Co. Louth Golf Club.

Maguire played his last 36 holes in eleven-under posting rounds of 65 and 68 on Bank Holiday Monday to win by two strokes on eight-under-par in the glorious sunshine.

Caolan Rafferty and Jack McDonnell came up agonisingly short in second place on -6.

After a tough couple of days weatherwise, a packed gallery swarmed the fairways in Baltray and created a crackling atmosphere as roars and gasps bounced off the dunes.

Maguire teed off ten shots adrift of Scotland’s Shaun Hedger but by the end of the third round this morning he had whittled that deficit to just three shots with Naas man Robert Brazill leading the way.

The Laytown & Bettystown golfer eagled the 18th this morning but didn’t quite carry that momentum into his final round starting with a bogey but he recovered to turn in one-under.

Queue the drama. At one stage there was a four-way tie for the lead with Maguire, Rafferty, McDonnell and Brazill all locked together on five-under-par.

Rafferty edged his nose in front on the front nine before a long-range birdie effort on the 12th drew Maguire level as he fist-pumped the putt home to a chorus of cheers.

The Florida Atlantic University student moved into the lead for the first time this week with a birdie on 13 before a sloppy bogey on 14 gave hope to the chasing pack.

With Rafferty and McDonnell still with plenty of holes to play when Maguire’s wedge shot on 16 rattled the flagstick and spun off the green it looked like it might be one of the great if unfulfilled comebacks.

However, there was one more sting in the tail, after finding the left rough off the tee on 18, Maguire drilled a long-iron to six-feet and sunk the putt to an almighty roar from the packed gallery and the Alex Maguire ultras!

“It was nice to finish that way,” said Maguire who claimed his first win on US soil at the Bayou City Collegiate last month. “I was trying to push it up the last couple of holes and hit the flag on the sixteenth and sort of lipped out on 17 so it was great to finish with a three on the last.”

That moved the Mornington native one clear and he was forced to wait approximately an hour for the leading groups to finish.

A dropped shot on 16 left former Walker Cup player Rafferty needing an eagle to tie but he was unable to chip in for the desired three. There was more late drama in the penultimate group as Forrest Little’s McDonnell found the heavy right rough off the 18th tee and was forced to take a penalty drop.

Needing just a birdie to force a playoff one errant tee shot put paid to his chances. Unfortunate circumstances for the Irish international who cut a dejected figure walking off 18 after a bogey.

A nervy wait but it was worth it as Maguire claimed his third win in the space of twelve months after capturing the Connacht Strokeplay and the North of Ireland Open last season but the East was the one he craved.

“That waiting around was not very fun,” he laughed. “I wish it was decided about an hour ago so I didn’t have to wait around so I am delighted. Out of all of them to win at home, this one is the one I wanted to win. This is the main one because I only live across the road about ten minutes away so it’s close to home so I am delighted.

“I got quite lucky on a couple of holes, I chipped in on seven, I got lucky there and got plenty throughout the day. Hitting the pin on 16 was one of those you really want the ball to drop and it doesn’t but I took it on the chin and talked to my caddy Jack and said ‘right two more’ and I finished par, eagle so it worked out well.”

Maguire teed off in the opening group of round three this morning simply playing for position with thoughts of lifting the trophy and adding his name to the illustrious roll of honour far from his mind.

There was plenty of local talent on show in the afternoon with crowds lining the fairways following Maguire and Rafferty (Dundalk) while Baltray was well represented including Gavin Tierney who played the final round with Maguire.

“I said to my girlfriend yesterday I didn’t think I could win today but then I just caught fire. I had a shank on the second hole this morning and then went four or five-under for the front nine, it was funny in the North last year I had a shank on the first hole and went on to win so I maybe thought there was something special going on.

“I just went at everything, the swing felt very good and I managed to get lucky a few times and roll in a few putts.

“It’s great to have everyone here, I know there was a lot of people here for the Baltray and Dundalk guys but there was a huge crowd out following me today and I can’t thank every one of them enough, the roars and the cheers were great even when you made bogey they kept me going,” he added.

After a three-year hiatus, the 2022 East of Ireland served up a classic and one that will live long in the memory.