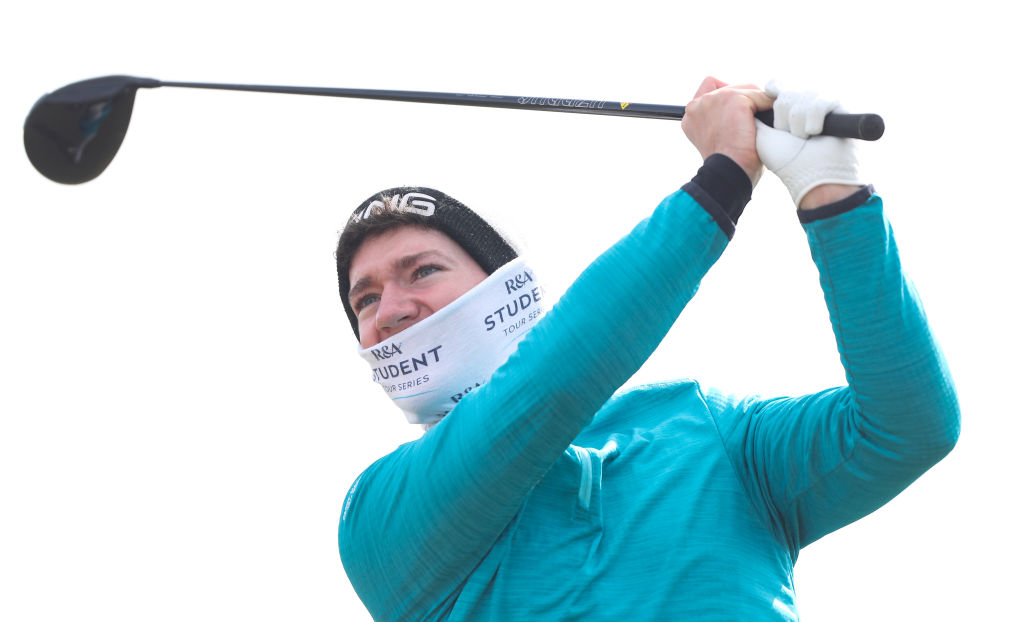 The Flogas Irish Men’s Amateur Open Championship might be just short of halfway towards its conclusion, but Ryan Griffin might have landed the moment of the week so far after his stunning hole-out eagle from 170 yards on the 18th kept him within three of the lead this morning.

The Ballybofey and Stranorlar man carded a superb eagle-two on the 18th to move to level-par through 36 holes and into the top-10.

Griffin had fallen to two-over for the championship after three-putting for bogey on 17 but he wouldn’t require the flat stick on the last as his six-iron flew over the flagstick and spun back into the hole to a chorus of applause.

In the end, it was a two-over 74 for the Maynooth University marketing student and he was thrilled with how he finished and how he has played so far.

“It was nice to finish the way I did,” he laughed. “We got the raw end of the draw both times. If you said to me I’d be two-over today I’d have taken it.

“I would take it that way,” he said after teeing off late and early. “Teeing off late yesterday there’s no real gap into this morning. If you played early yesterday and late today there’s a big gap and lots of time to think about it so it’s nice to get it over with and relax this evening.”

The Donegal native is in a share of 8th place with Robert Moran who also shot a 74 in the morning gales and he will be sticking to his game plan of A to B over the weekend.

With a marketing exam looming next week, Griffin is braced for a tough golfing examination at the Island.

“Not really no, there’s not added pressure being in this position. I’m just staying in the moment and sticking to the game plan. I am trying to be aggressive when I can and just play smart when I have to.

“It was carnage out there but you knew it was the same for everyone this morning and there’s a lot of holes if you make a five you aren’t losing ground on the field at all so you have to just stay patient and take your chances when they come.

“I stuck to my game plan well today, the wind was blowing seriously strong and I had to club myself to the wind and lay up short of bunkers here and there, yeah I am happy with it.

“You can catch some serious fliers if you are in the rough. Even trying to play out of it and run it up the greens the way they undulate is very difficult. Finding the fairways is the big one and sometimes taking a two or four iron off the tee is the way to go.”