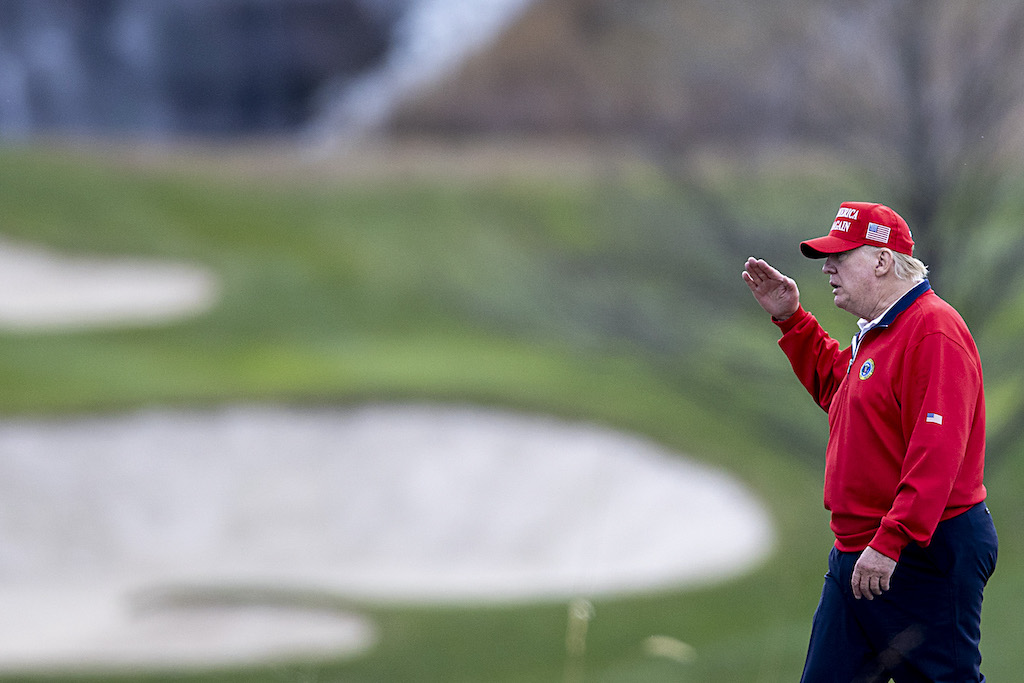 Donald Trump has never been shy about extolling his own golfing prowess and in an upcoming interview with Piers Morgan, it’s come to light that the former US President has enjoyed his fair share of on-course success.

The interview, being promoted as Morgan versus Trump, released a 30-second trailer of a disagreeable back and forth between the former friends who were personalities at large post Morgan’s winning of the Trump hosted Celebrity Apprentice in 2008.

The subject of golf seemed to be the last thing on the interviewer’s agenda but when Trump was informed of slights made against him by Morgan in previous columns, the Englishman brought up Trump’s recent hole-in-one landed whilst playing alongside Ernie Els at his own club in West Palm Beach to ease the tension.

To set the scene, Morgan claims Trump was handed a list of quotes minutes prior to the pair sitting down. Quotes like, ‘Trump’s a supreme narcissist,’ ‘He’s now acting like a Mafia mob boss,’ and ‘all because Donald’s stupendous ego couldn’t accept losing and sent him nuts’.

‘I thought we were friends?’ Trump was said to shout at Morgan upon reading. ‘This is so disloyal! After all I’ve done for you? Why would you say all this about me?’

In his column recounting the incident, Morgan wrote: “He was almost foaming at the mouth and kept shaking his head slowly and menacingly at me, like Don Corleone when he felt he’d been disrespected.”

Sensing the interview could be over before it began, Morgan then made Trump an offer he couldn’t refuse:

“I’d love to talk about your recent golf hole-in-one. Your playing partner Ernie Els was raving about it.”

“He was? Where?” Trump asked, his belly rubbed.

“He said it was a brilliant shot and you played really well,” Morgan said having read Els’ quotes online.

“I did, I did,” said an appeased Trump, and when Morgan asked if it was Trump’s first ace on the golf course, he promptly replied: “No! I’ve had seven!”

They say the odds of making a hole-in-one are 12,500-1. To make seven is quite a feat for the amateur golfer but whatever you think about Trump’s claims, there was no denying his most recent feat; a hole-in-one landed on the 7th hole at Trump International in Florida, as told by four-time Major champion Els:

“We’re all watching and I’m like, ‘this thing is looking good,’ ” Els said. “It bounces and I got my contact lenses in. I saw it clearly.

“We throw our clubs in the air. You know, ‘it’s unbelievable.’ You play with the ex-president and he makes a hole-in-one. How many times does that happen? That’s the thing that goes through your mind.”

“He hits the ball better than I’ve seen any … I mean he’s 75. But he can really strike the ball. He makes good contact. He’s got a good swing.

“Like any amateur, you got to do the short game practice. I keep talking to him about his chipping. He’s a pretty good putter. Back in his day, he had to be a 4- or 5-handicap. Today, he’s probably a 10, 12.”

Whether or not Trump has actually holed out seven times on par-threes throughout his golfing life, who knows, but whatever about his on-course performances, they still fall some way short of another former supreme leader.

It was in 1994 that Kim Jong-il teed up off the back sticks at the 7,700-yard championship brute of a course at Pyongyang. Having never played golf before, it looked like a big ask for the then North Korean leader to even get ’round the track, never mind break par, which he did, with ease, according to the ever-reliable North Korean state media.

Kim shot 38-under par that day without breaking a sweat. His round included 11 hole-in-ones. And it was his first time playing the game.

It took Trump half a century to accumulate his magnificent seven aces – big deal! But in all fairness to Trump, Kim Jong did enjoy his fair share of beginner’s luck.