Rory McIlroy “I came up a little bit short, but I gave it a great go, and I can’t ask any more of myself” 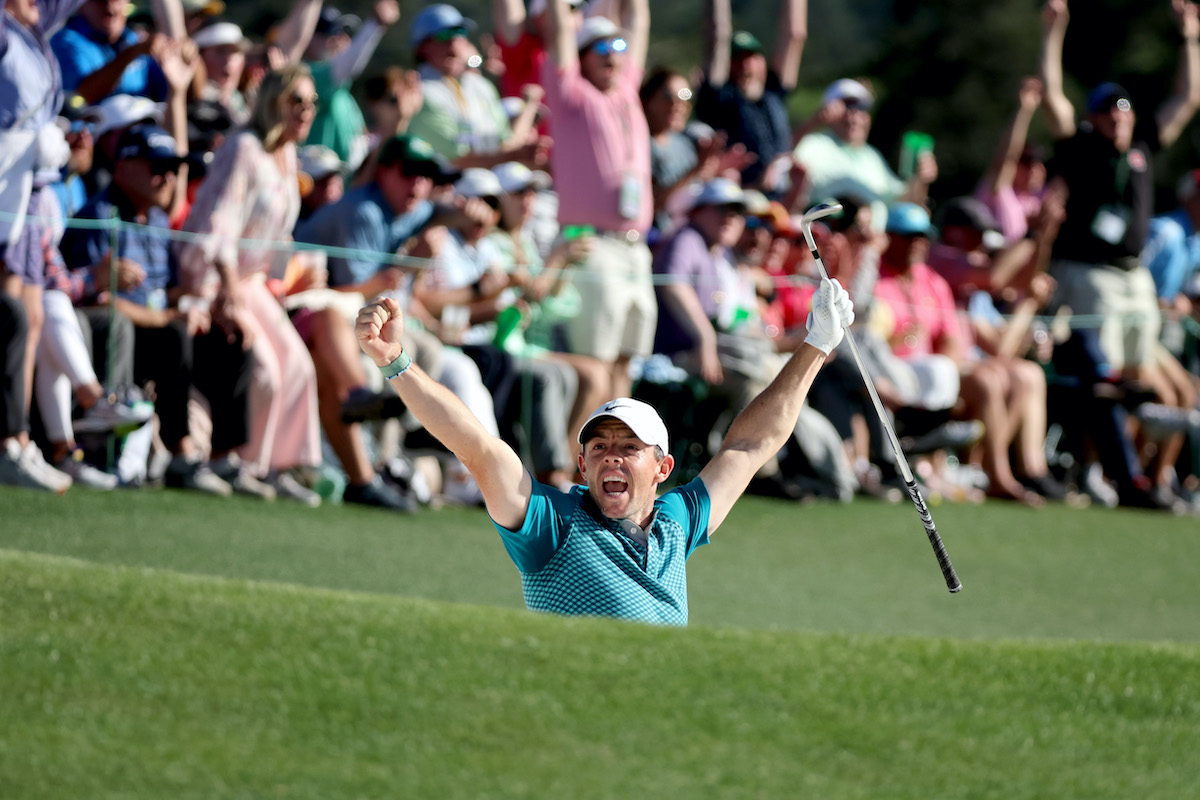 Rory McIlroy described his outstanding final round surge at The Masters as the happiest he has been on the golf course as he wrapped up a second-placed finish with his lowest ever round at Augusta National.

McIlroy tied the lowest final round score ever produced at The Masters with an eight-under 64, one shot shy of the course record, to finish the week at seven-under-par, which looks to have him as the runner-up to runaway leader Scottie Scheffler.
The four-time Major champion, who only has The Masters remaining to complete the career Grand Slam, was exceptional on Sunday as he carded six birdies and an eagle in a bogey-free outing at Augusta to haul himself up the leaderboard.

He and playing partner Collin Morikawa seemed to pull each other up, the pair matching each other shot for shot at points, including both holing out from the same greenside bunker at the 18th for remarkable birdies to close.
The roar that went up reverberated around the grounds at Augusta National and provided a grandstand finish for McIlroy, who was left grinning from ear to ear after securing his best career finish at The Masters.

“It’s what you dream about, right? You dream about getting yourself in this position. I wasn’t quite close enough to the lead, I don’t think. Scottie is playing really, really well. To play as well as I did today and then to finish like this, I mean, it’s just absolutely incredible,” said the Holywood man.
“This tournament never ceases to amaze. Yeah, that’s as happy as I’ve ever been on a golf course right there. Just having a chance, and then with Collin, we both played so well all day, and for both of us to finish like this, I was just so happy for him too.

“That’s what makes golf so cool. We’re competitors out there but at the same time we’re friends, and we travel around with each other every week. Collin is a great guy. It was a great pairing for me today, and happy that we both played well.”
Usually his weakness, McIlroy gained six shots on the field around the greens with some stunning play with his wedges and putter, three strokes better than any other player in any round, and that formed the backbone of his superb 64 that saw him start the day one-over and finish second.

A nice approach led to a birdie at the par-four first, and then he drove the green at the short par-four third which led to a two-putt birdie to get him under-par for the first time since the opening round, with a fine birdie putt from the back of the par-four seventh green and then a perfectly played pitch at the par-five eighth leading to another to sign for a 32 on his front nine.

It was on the 10th that a belief began to form that something incredible could be on when McIlroy chipped in from the back of the green, a feeling which was only furthered when a phenomenal second shot on the par-five 13th yielded his eagle to move him within touching distance of Scheffler at six-under.
However his momentum stalled with pulled drives at the 14th, 15th and 17th, which left him frustrated, but his finish was nothing short of sensational as he played the slope to perfection with his bunker shot at 18, which snaked down the slope and into the hole.

McIlroy started the day ten shots adrift of Scheffler will leave with so many positives, not just for next years Masters and his 9th attempt at completing the Grand Slam but for the rest of this season.
“Yeah, I think just all these memories that are building up, I think I’ve had some really good Sundays here from a little further back, and it is about trying to channel whatever attitude that is that I bring into — the 66 I shot with Tiger in the final group in 2015, or not the final group but the final round, obviously today, I’ve had a few other rounds where I haven’t been quite in contention and shot good scores.”

“So I think the more and more I did it, the more memories I build up and the more, if I do put myself in a position closer to the lead going into Sunday, that I can — you know, I can delve into that memory bank and try to use those memories and my experience to my advantage.

“I’ve always known that I can do it. I’ve played good enough around here, maybe just haven’t strung four rounds together like that, but I’ve always known that I have the game to win at this place. It’s just a matter of having — having that game for four days in a row and not making big numbers and shooting yourself in the foot I guess. That was my attitude the first couple of days. I certainly didn’t do that. I played for pars quite a lot, but in the course of a tournament, you are going to find some spots where you go on a birdie run, and you try to take advantage of some of the good golf that you play, and I did that today.”

“But yeah, I don’t think it just sets me up for next year, it sets me up for the rest of the year. I feel like my game has been sort of quietly pretty good without the results to really show for it. But again, today it was a golf course that I felt was gettable and I feel like I’m playing well enough to go out there and shoot those sort of scores.”

It may not be the Green Jacket he was looking for, but it’s another week at Augusta that will give McIlroy plenty of confidence he can get the job done at some point and finally end all those questions about the career Grand Slam.
“I came up a little bit short, but I gave it a great go, and I can’t ask any more of myself. I went out there today, shot my best ever score at Augusta, and it’s probably going to be my best finish ever,” added McIlroy. “I’ll come back next year and keep trying.”