Back nine fightback secures Seamus Power a weekend at The Masters 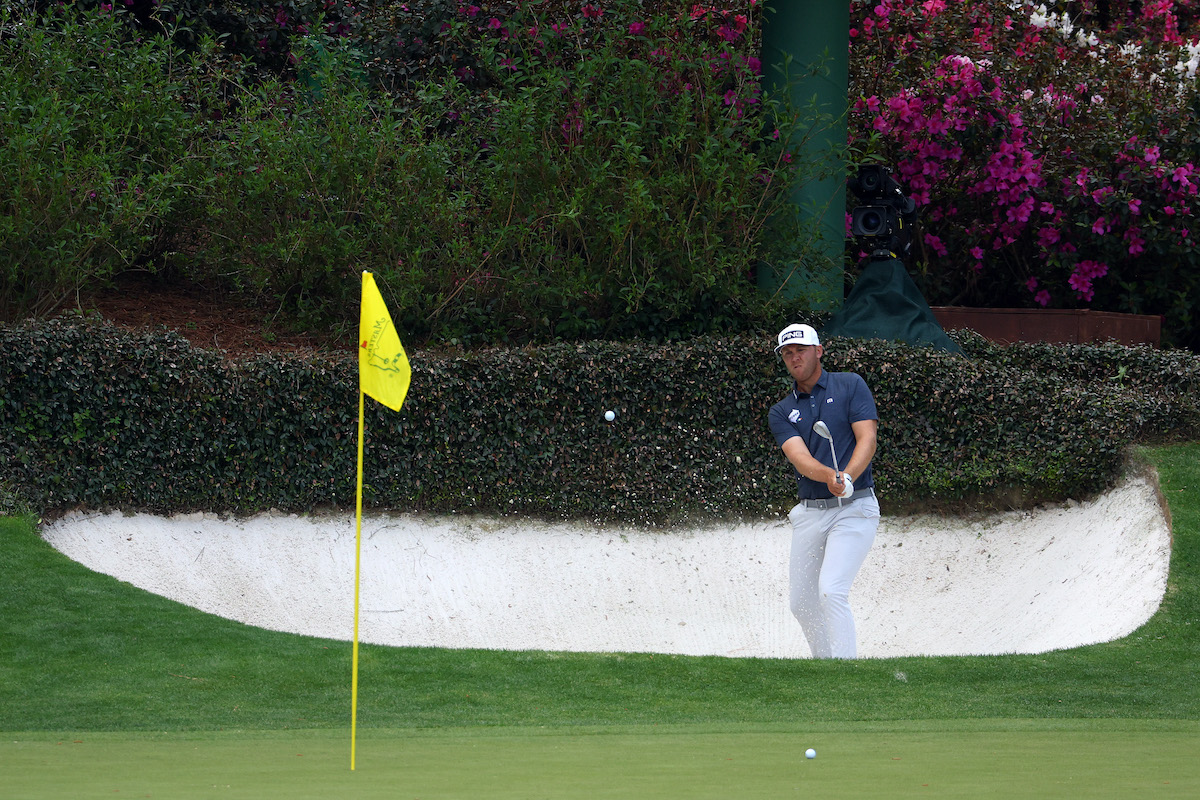 Seamus Power of Ireland plays his shot from the bunker on the 12th hole during the second round of The Masters at Augusta National Golf Club on April 08, 2022 in Augusta, Georgia. (Photo by Andrew Redington/Getty Images)

On a tough scoring day with gusts of up to 40mph ripping through Augusta National, West Waterford’s Seamus Power dug deep to secure a weekend tee time at the Masters.

Power, who carded an opening round 74 with no birdies continued the disappointing streak as he carded three dropped shots on his front nine, taking his birdie-less streak to 27 holes.

Entering the back nine Power admitted he had to take on a more aggressive approach to try and make the cut mark which as he finished was at +4 and drifting.

The gear change was instant as Power went flag hunting on the 10th and left himself an eight foot birdie chance which he rolled home and raised his arms to the air in celebration of his first birdie of the week.

“It was my first birdie. I was delighted. It was tough there today like, my patience on the front was running thin,” admitted a smiling Power. “I hit a really good tee shot on 10. I was left 195 to a pin three from the right with wind, 15 to 20 miles an hour off the right, and I’m not sure. But I hit a really good shot, and the wind didn’t move it, and I ended up getting closer, so that was nice.”

With the swirling wind playing havoc around amen corner Power dropped shots on 11 and 12.

“It’s tough down around the lower part of the course, like 12 was the perfect example, I heard guys talk about it, how the wind swirls. Patrick Reed in front of me hit an 8-iron. We hit irons similar distance. He hits his 8-iron about 135 yards into the water. It was like, okay, I guess I have to flight it down a little bit. Straight over the pin, carried straight into the back bunker, make a 4.

The dropprd shot on 12 was to be Powers last as he instantly responded with a birdie on the par-5 13th and then hit it to three feet on the par-3 16th and converted for his third back nine birdie to come home in 35.

The key to unlocking low scores around Augusta National is normally the par-5s and Power admitted that’s an area he has struggled with this week as he is only level par for the eight he has played.

“I haven’t hit the par-5s well enough, and that’s kind of killing me. I feel like I’m even-par for the eight par-5s. which is disappointing,” added the Waterford man.

“I think that’s where your chances are, especially when it’s gusting like this. If the wind is as much over the weekend, maybe I get a few chances here and there but It’s just tough going,” he said.

“I tried to stay aggressive on the par-5s, like on the 15th today, I thought I hit a very good second shot, a perfect example into the wind. Wind dies on its way to the green. I was about 40 yards over the green. I can’t hit my 3-wood that far even on a calm day. It’s one of those days that’s just tough to judge.”

With a weekend tee time confirmed, and the windy conditions set to continue, Power has his eyes on a game plan for the weekend.

“I feel very comfortable out here. The tee shots all kind of suit me. It’s just I probably need to work on flighting a little bit. A couple times a little lackadaisical, not going to hurt straight across, so just hit it up in the air a normal shot. If it is a tiny bit hurt, it comes way back. Maybe hit the little flighty ones to take a little degree of guessing out of it, and that will be my key going into tomorrow.”

The Masters cut is set for the Top 50 players plus ties and the wind forecast to keep blowing fingers crossed it holds and Power can kick on over the weekend at his first career Major appearance.

“Hopefully I make it in, but we’ll see what happens in the afternoon.”