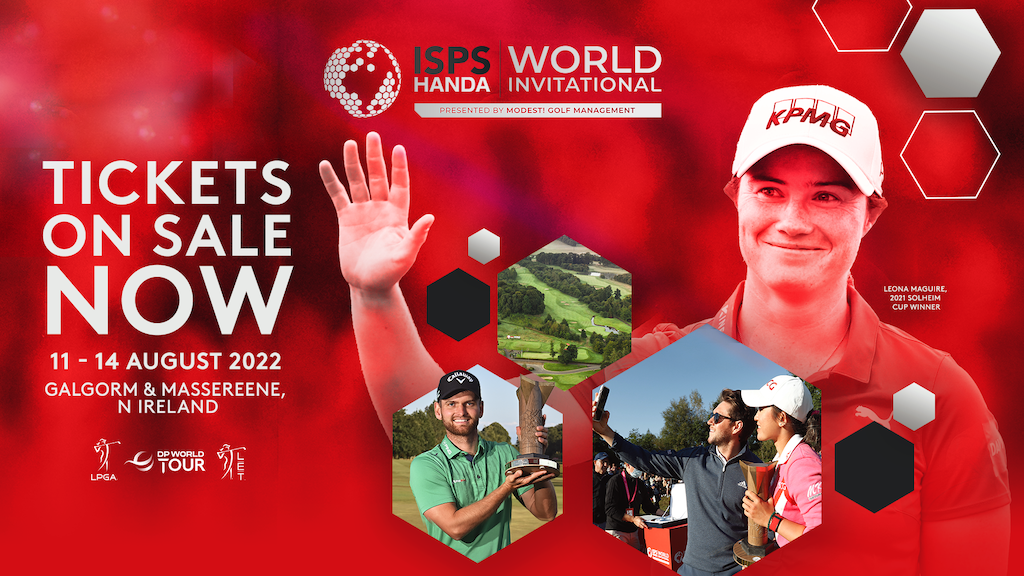 Leona Maguire will play in front of her home fans for the first time since making history as the first ever Irish winner on the LPGA Tour when she tees it up at the ISPS HANDA World Invitational presented by Modest! Golf Management, and a limited number of launch price tickets to witness her return are on sale now at et.golf/ISPSHanda2022Tickets

The 27-year-old became the first Irish player to win on the LPGA Tour in February, claiming a three-stroke victory over Lexi Thompson at the LPGA Drive On Championship and sparking celebrations across the island of Ireland.

Maguire, who also put in a starring performance in Europe’s Solheim Cup victory last year where she won 4.5 points from a possible five, is sure to receive a rapturous welcome when she returns to Galgorm and Massereene from August 11-14.

The ISPS HANDA World Invitational brings together some of the best players in the men’s and women’s game with two tournaments – a DP World Tour event and a co-sanctioned LPGA Tour and Ladies European Tour event – played concurrently over two courses in Northern Ireland.

“I’m really excited to return to the ISPS HANDA World Invitational,” said Maguire. “I was disappointed I couldn’t make it last year, but I watched it on TV and it looked like a fantastic week, and I heard great things from the players who were there.

“It’s been an incredible six months for me and I’ve received so much support from home since winning on the LPGA Tour, so to go back and play in front of the Irish fans for the first time at Galgorm and Massereene is going to be incredible. I can’t wait.”

Irish disabled golf hero Brendan Lawlor, meanwhile, won the G4D Tour event also hosted at Galgorm that week, an emotional victory which helped elevate him to the top of the WR4GD (World Rankings for Golfers with Disability) for the first time in his burgeoning career.

For Maguire, it will be a chance to emulate her compatriot Stephanie Meadow, who won the inaugural edition of the event in front of her home fans in 2019, prior to it becoming an LPGA Tour and Ladies European Tour sanctioned event.

Launch price tickets are on available now at et.golf/ISPSHanda2022Tickets Complimentary tickets for those aged 12 years and under are available upon purchase of an adult ticket.

You can also register your interest in priority access and the most up-to-date information about the ISPS HANDA World Invitational presented by Modest! Golf Management at et.golf/ISPSHanda2022SignUp