The day Arnie introduced us to ‘Mulligan’ 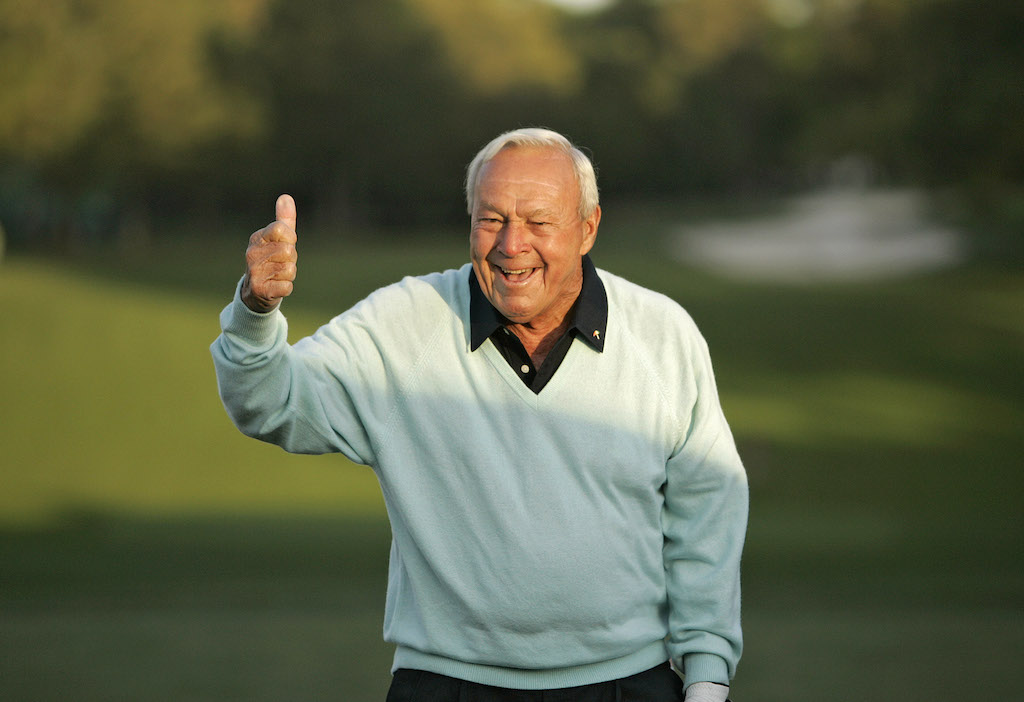 One of what I would say is a first delight in nearing the Bay Hill Club and Lodge is that there are no security gates, no security guard box, or even a simple electronically-operated boom gate.

This is so vastly different to the scenario across America where, and even at some public courses, unless you have prior permission or a suitable pass, you just cannot get past the front gates. Of course, in this dangerous world, that’s how sometimes it must be.

Though not in driving down South Apopka Vineyard Road and then turning either right or left into Bay Hill Boulevard, and finding your way driving past the 15th championship tee on your right before turning right into the main carpark.

This is the scenario for 51-weeks of the year in being able to park your car in the same enclosed area, and a tournament venue where Tiger Woods won eight times among his 109 worldwide victories. The name ‘Tiger Woods’ dominates the gleaming Arnold Palmer Invitational trophy between 2000 to 2013.

Indeed, Woods won the four victories in succession including his sheer dominating 11-shot success at Bay Hill in 2003. Looking back on that standout period, photographs of Arnold Palmer and Tiger engaging on the presentation green at Bay Hill remain some of the fondest in golf. 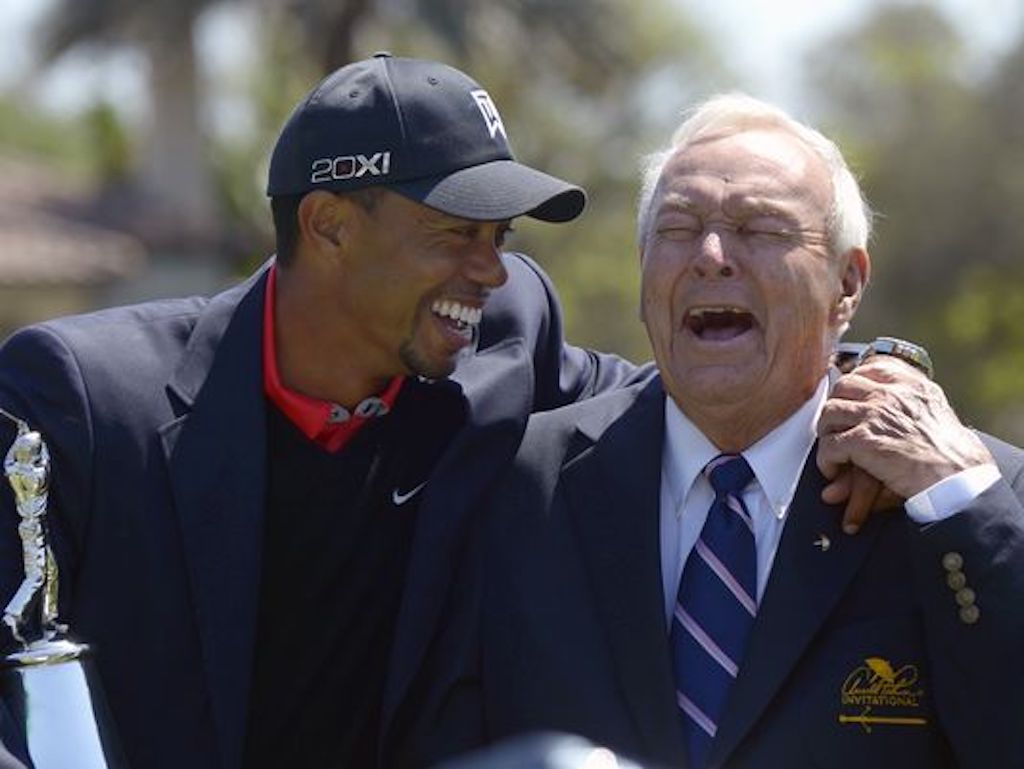 So relaxed is a visit to Bay Hill that one year in driving into the car park, and outside of tournament week, we bumped into the legend himself. It was after driving the short distance to Bay Hill from where we were reporting on the PNC Championship at the Ritz Carlton resort course.

After parking the car, we made our short way to the tennis courts where the ‘temporary’ Media Centre is located each year. Here driving up the roadway in a motorised buggy was the man himself. Arnie was behind the wheel with this sleepy-looking Golden Labrador sitting peacefully beside him.

I have sat in ‘Arnie’s’ presence many times before in attending the Arnold Palmer Invitational but I will never forget this Saturday morning in early December one year and how engaging and relaxed he was. I asked him a question, that I really should have known the answer to, and that was: “Mr. Palmer? What is the name of your dog?”

“Mulligan,” said Arnie. It seemed such an appropriate name for the golfer known as ‘The King’. 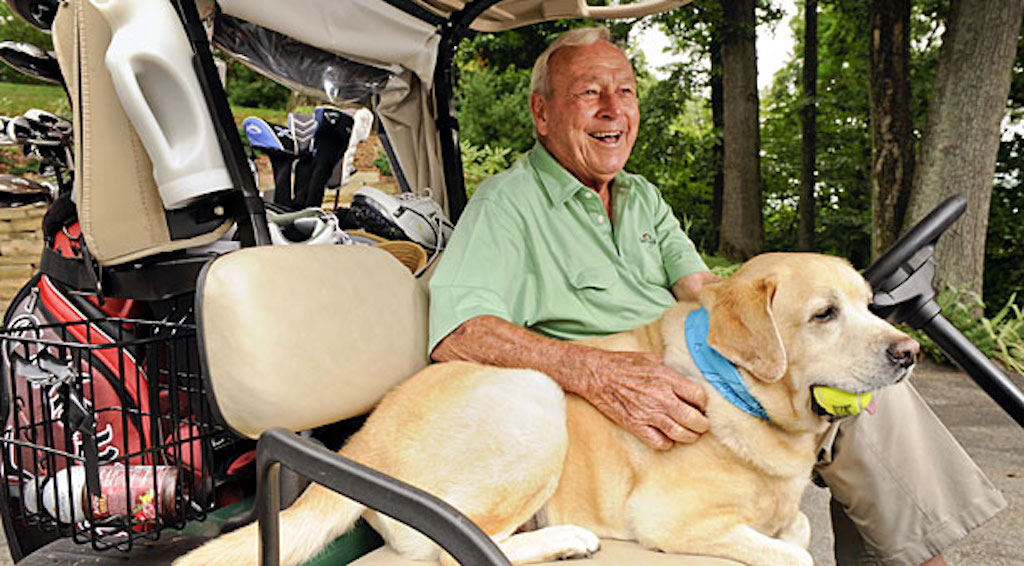 Sadly, we lost Arnie in 2016 at the ripe old age of 87, and on the Sunday before the Ryder Cup.  And when I arrived at Hazeltine in the days after his passing, I noticed, as a mark of respect, one of Arnie’s golf bags placed on the first tee and I knew then in admiring his golf bag, that there was no way the USA would lose that week’s hosting of the biennial competition.

On a more recent visit to Bay Hill, and also while reporting on the PNC Championship, we drove our friend and colleague ‘Swammy’, who had not previously visited the club. As we alighted from the car, here on the practice putting green was Arnie’s great long-time friend Dow Finsterwald.

Dow was just as engaging as Arnie, and as he practiced his putting, he did so with his clubs in a 1977 Ryder Cup golf bag, yes 1977, and featuring the name – Dow Finsterwald, Captain. Finsterwald led the USA team to victory at Royal Lytham & St. Annes, and in the last against a combined GB&I team.

The Arnold Palmer Invitational continues this week with the 57th anniversary of the event first staged in 1966 as the Florida Citrus Invitational Open. Arnie won the tournament for a first and only occasion in 1971, eight years before the tournament moved to Bay Hill, where it became known as the Bay Hill Citrus Open.

Since 1979, the tournament title has had a number of different names, most of them including “Bay Hill,” including the Bay Hill Invitational from 1999 to 2006, and now played under the Palmer name since 2007.

Eight years ago in 2014, the PGA Tour granted the winner a three-year Tour exemption, one more year than regular Tour events and on par with winners of the World Golf Championships, The Tour Championship, and the Memorial Tournament.

In 2019, the Arnold Palmer Invitational was added to the Open Qualifying Series, offering three non-exempt players entry into The Open Championship.

Of special note, the winner this week again receives a red cardigan sweater in memory of Arnold Palmer, a tradition that began with the 2017 tournament following Arnie’s passing some six months earlier on the eve to the start of 2016 Ryder Cup week, with Aussie Marc Leishman the first recipient of the cardigan and a year prior to Rory McIlroy.

The Arnold Palmer Invitational is a special event on the PGA Tour schedule, being staged on a very special course at an extra special golf club.

In years gone by, the visiting media would be hosted to an evening meal in the clubhouse and it was not uncommon for Arnie to join the gathering, such was his strong relationship with the written press.

Arnie left us now over four years ago, but his memory lives especially for one week each year in March. There is the stunning statue of Arnie behind the first tee for all to again admire while the custom will continue of leaving one of Arnie’s golf bags and umbrella on the far right side of the practice range.

There’s a pro shop stocked with souvenirs bearing the famed rainbow umbrella logo and reminders all about the course of Arnie, while if you should be fortunate to enter the Bay Hill Lodge and Club clubhouse, whether it be this week of the tournament or any other week, take time to admire so many wonderful photographs and mementos of ‘Arnie’.

Though before entering the clubhouse, look closer, as parked outside is a motorised golf buggy and there on the back is two Arnold Palmer ‘Ryder Cup’ theme golf bags, full of clubs, parked there in memory of ‘The King’. 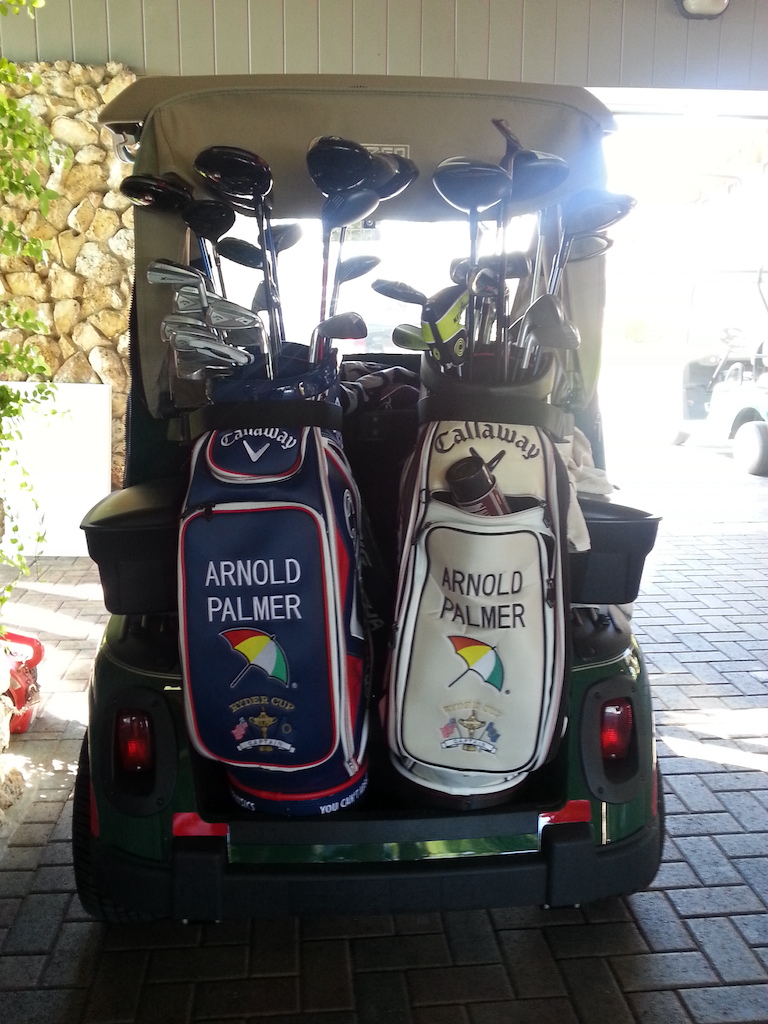