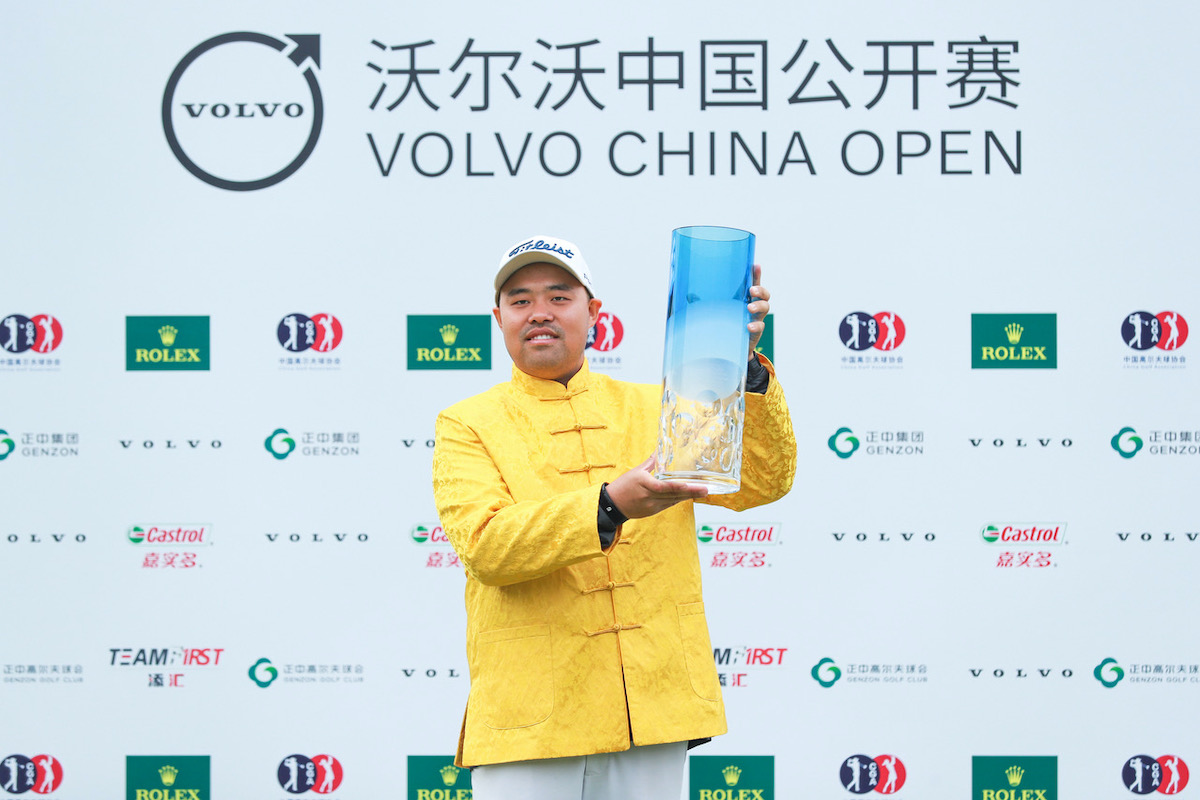 Unheralded Jin Zhang hoped to make the cut but ended the week a Champion after a closing 71 (-1) saw him clinch the 27th Volvo China Open at Genzon Golf Club in Shenzhen.

The 26-year-old China Tour pro held his nerve to clinch the biggest win of his career by one shot, despite a gritty but ultimately unsuccessful final day charge from 2016 winner Haotong Li.

Needing a birdie on the 311-yard 18th to win, Zhang confidently drove the green and left himself with a tap-in birdie putt to finish on 8-under par and win by one from Li (-7) with Guxin Chen and 17-year-old amateur Wenyi Ding tied for third on 5-under.

“I’m so happy to be able to hold this heavy trophy,” said Zhang who stood on the 18th tee having made only two birdies all day but who saved the best for last to claim the famous Volvo China Open trophy and his first win on the China Tour.

“I couldn’t watch Haotong play on 18 and I thought he had made birdie. But someone told me he hadn’t so I knew I had a great chance. I didn’t really believe I could drive the green but I went for it so that’s the highlight of the round. It wasn’t my best day on the course and I didn’t make enough putts so I think luck was on my side today. I’m just so happy to be able to say to my father on TV ‘I’ve finally won!'”

Zhang, whose season’s best had been a tie for sixth place at last month’s Hengdian Championship, ended his China Tour title drought with the biggest title of them all. And with his wide brim sun hat and beaming smile, he was a hugely popular winner with players and officials alike.

For runner-up Haotong Li, the dream of becoming the first two-time Chinese winner of the Volvo China Open will have to wait another year. The 26-year-old former world number 32 got off to a flying start. Two birdies on the opening two holes quickly reduced the gap and by the turn he had overhauled Zhang thanks to two more birdies in a superb front nine of 32.

Another birdie on the 10th left the others playing catch-up as Li finally rediscovered the form that took him to two DP World Tour titles by the age of 22. But bogeys on 13 and 15 saw him fall back into the pack and it was a case of hoping for a play-off after failing to make birdie on the last and he ended with a 69 (-3).

In the battle for top spot on the China Tour Prize Money Ranking List, the 2020 Volvo China Open winner Zhang Huilin birdied the last to win the Ranking List and receive a playing card and full playing rights for the 2022 DP World Tour.

“It’s a pressure-packed tournament,” said Zhang Huilin. “I thought about a lot of things both as money-list leader and defending champion on my home course. I didn’t have my best game all week and made just eight birdies but I survived and have finally done it. Playing on the global stage is all I have dreamt of since I started to play. The 2020 Volvo China Open win was definitely the key as it counted for this season and I will certainly embrace the Tour membership.”