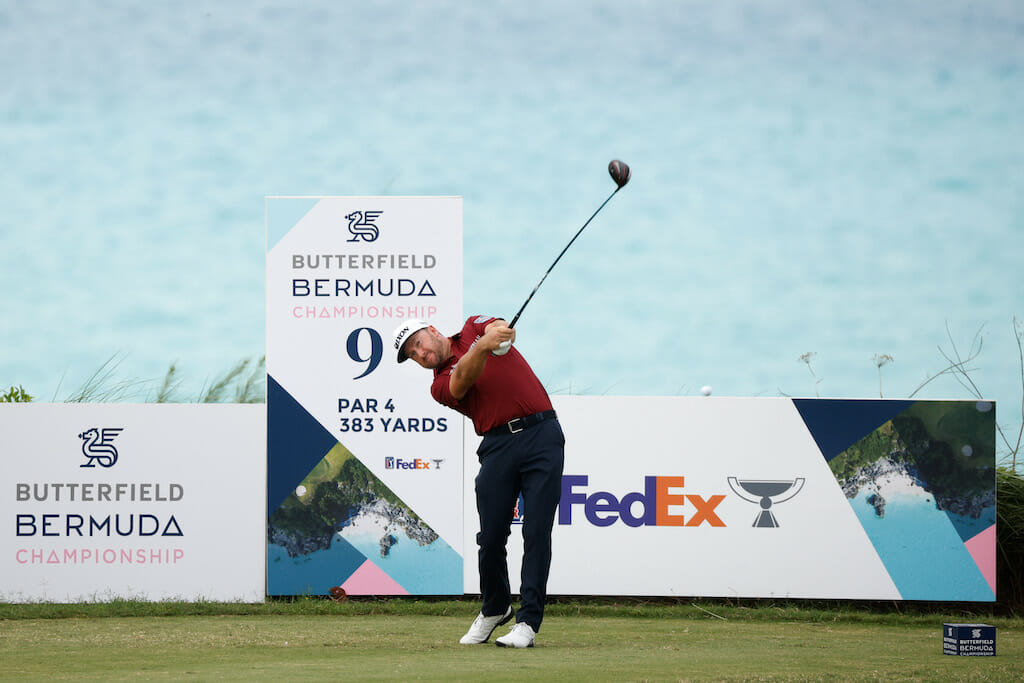 After being grouped for a first time on the Tour earlier in the week and then again on day three, there was no separating Graeme McDowell and Seamus Power after battling ultra-tough last day conditions for each to share 12th place at the Butterfield Bermuda Championship.

Power managed six birdies in a final round four-under par 67 for a 10-under par tally to jump 20 spots on the leaderboard while McDowell then joined Power finishing with just one birdie and 17 pars in his score of 70.

Reigning Irish Open winner, Lucas Herbert broke through in just his third event as a full PGA Tour member posting a last day 69 to win by a shot at 14-under par, with former Masters champ, Patrick Reed (65) and Kiwi Danny Lee (71) sharing second.

Herbert had won a maiden European Tour event at the 2020 Dubai Desert Classic on Australia Day and then a second at this year’s Irish Open at Mt. Juliet on the 4th of July to be now followed with a maiden PGA Tour win on Halloween.

Organisers brought the final day tee times forward to earlier in the day to avoid the worst of the conditions but the weather turned for the worst before the leaders had made the turn. And for a second time in the four days, there was a short stoppage due to yet another driving rain squall making play impossible.

McDowell was on the 10th hole at the time having parred all nine holes and still seven holes from his only birdie at the uphill par-5 17th for his best finish since his share of fourth last March at the Corales Puntacana Championship in the Dominican Republic.

“I’ll have a dark and stormy,” joked McDowell after being asked about his week.

“Seriously, they’ve been very difficult conditions this week particularly Thursday and today though I really enjoyed the week, and for some reason I do like ‘island golf’ such as the Dominican, and while Mayakoba it’s not really an island, and here in Bermuda.

“This week is great preparation for next week down in Mexico for the World Wide Technology Championship at Mayakoba where I won (2015). This finish is also a good start for an important four weeks for me as I want to start this little run of events the right way and I’ve done that..

“I am disappointed I could not get out there and do better today but they were very difficult conditions and I was just happy to hang in there and shoot one-under but then you look-up and guys are shooting nine-under (Scott Stallings a 62).

“It’s just a reflection of this Tour as the standards are incredibly high and when you are finishing top-10, top-15 you have to be focussed and have the right attitude.

“I had the right attitude this week and again, these four weeks I am playing are off to a great start for me and hopefully I can continue to build as I need to be out there feeling a bit under pressure, feeling the juices flowing a little bit.

“I have to climb back up the ladder again and if that means feeling a bit under pressure and finishing top-15 here in Bermuda, then it’s the step in the right direction I was looking for.”

Indeed, McDowell’s tied-12th result is a significant one, not only banking him $129,025 but also projected to jump him some 89 spots to 86th on the early FedEx Cup standings.

Power also cashed in, bookending his tournament with four-under par rounds of 67 for his eventual 10-under tally. He traded six birdies with two bogeys on the final day with his birdie on 18 proving a valuable one, matching McDowell’s pay cheque while also moving him up 43 places to 51st on the FedEx Cup standings and returning him to the world’s top-100.

The West Waterford man is also headed to Mexico to join McDowell in Thursday’s starting event.