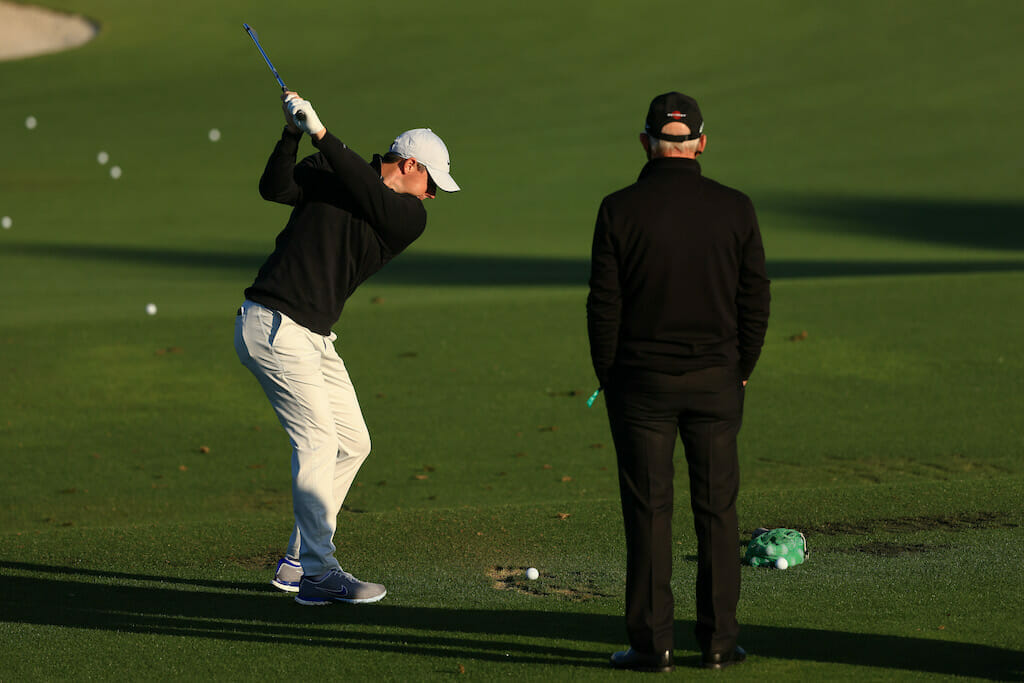 Legendary coach Pete Cowen has gone public in a UAE newspaper addressing rumours he has been sacked by Rory McIlroy.

Cowen says he’s taken the very unusual step of writing for the Dubai-based Gulf News after revealing he has also been hounded by journalists from the UK asking where ‘he stands’ with his relationship with McIlroy following his absence last week when McIlroy won in Las Vegas.

And in quoting Mark Twain, Cowen said: ‘Reports of my death have been greatly exaggerated.’

I have been contacted by a number of the UK golfing media over the last 72 hours about where I stand with Rory McIlroy.

It seems, because I was not with him last week in Las Vegas when he won the CJ Cup on the PGA Tour, everyone assumes we are not together. Does anyone realise that I cannot be with all my players, all the time, wherever in the world they are playing?

Just to put the record straight to all Gulf News readers and the rest of the world, I spoke to Rory as recently as Thursday.

All I can say, to use the quote attributed to Mark Twain, ‘Reports of my death have been greatly exaggerated.’

Rory is having some much needed and well deserved R&R. People don’t seem to realise what a win takes out of a player, both physically and mentally.

We had a good chat about his forthcoming schedule which he will finalise and announce shortly.

I looked at our tournament record since we’ve been together and we’ve won two of 14 events which we should all be proud of.

Rory’s life-long golf coach and family friend Michael Bannon built his swing from the age of 8 and will always be involved with Rory, but Michael does not travel much these days.

It seems that Rory is getting his feel back into his game, rather than just trying to find more strength and length which is not Rory’s style. This is a process that he has had to go through and learn for himself.

To get that feel back he had to go back to the basic fundamentals of the game which is, hopefully, where I have made a difference.

I did not quite realise the volume of noise of the media spotlight around the world’s top players, such as Rory. Rumours are rife on tour and spread very quickly on social media and websites (many unofficial) and the like – they should be ignored unless it comes from the horse’s mouth.

In my line of work and at 70 years old, you need tough skin to survive and to sleep at night; I have been sacked by World Number Ones before and that is their choice.

I’ve been in the US over the last week or so, spending time with some of my stable including Graeme McDowell, Henrik Stenson, Ian Poulter and Brooks Koepka.

Seeing my players outside of a tournament week is a very different experience. Usually, my players need just a quick look over, with no dramatic swing changes. This week they do not have any tournament rounds to see the results. I have seen enough of them, and the players will certainly have had enough of me!

I fly back to Rotherham today and I may go to Portugal next week to catch-up with some of my other younger players. I have not seen them for a few weeks and we all need face to face engagement.

Soon, I will be over to see you all in Dubai in a couple of weeks just before the AVIV Dubai Championship on the Fire course at Jumeirah Golf Estates.

Finally, good luck to Chris, Barney and all at Emirates Golf Club, who this week will be hosting the Ladies European Tour’s Dubai Moonlight Classic.”