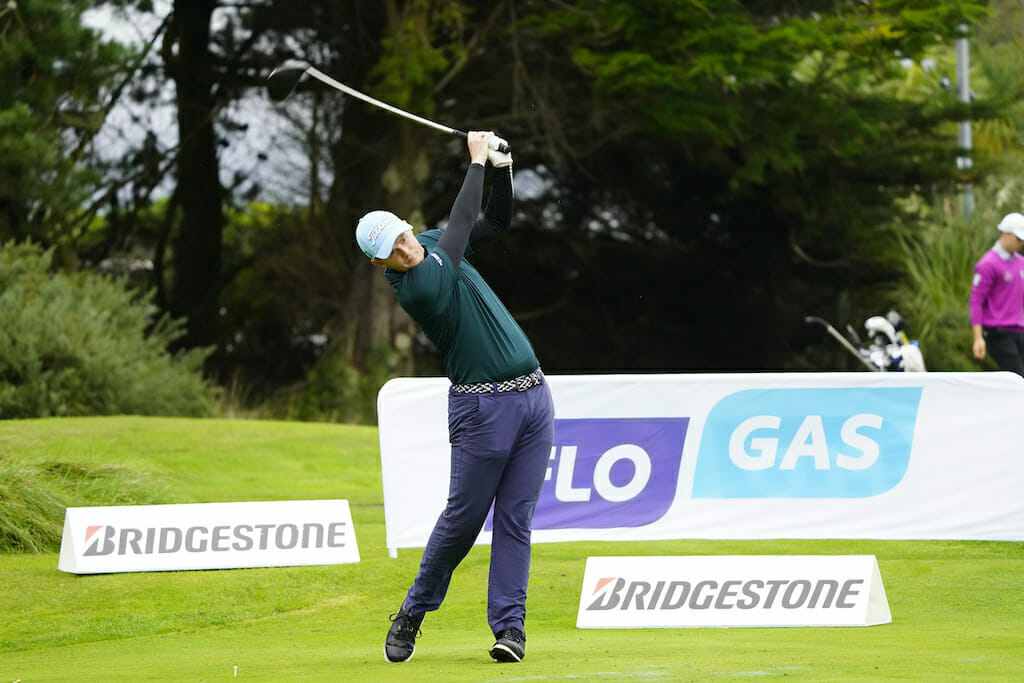 Athenry’s Allan Hill and Switzerland’s Nicola Gerhardsen lead the Flogas Irish Men’s Amateur Open with one round to go at The European Club. The duo are tied on +2 going into the final day, one shot clear of AIG Irish Men’s Amateur Close champion Peter O’Keeffe.

Hill went into the day one shot clear of the field, and despite a second round of 75 that included a bogey on 18, he still remains top of the leaderboard.

“I was five-over through seven or eight holes today, so I was very happy to claw it back,” Hill said after his round. “If conditions are like today, you will never know what could happen with a solid round.”

Gerhardsen was one of the final players to finish his round in the dark, but a second successive round of 72 sees him in prime position going into Sunday’s finale.

“It was an amazing day. I played really solid golf and kept it together. I stayed mentally focused in the wind. I played this course when I was 13 with my dad. I’ve got great memories here. It’d be great to win tomorrow.”

Lurking one shot behind the duo on +3 is Peter O’Keeffe. The Bridgestone Men’s Order of Merit leader is hoping to add a second Flogas Irish Men’s Amateur Open to his CV.

“We had the best side of the draw today, I felt. I was five-over for a lot of the day. Getting through 9 ,10, 11 and 12 intact was key for me. I’m putting the ball lovely. The game is in great shape. Patience and attitude will be key tomorrow. It’s windy on a tough course and conditions are similar to when I won in 2017.

Canada’s Brendan McDougall is leading the chasing pack and lies on +5.

“I finished with two bogeys but thought I played really well. I would have taken this position at the start of the week. It’s a mental battle out there. I haven’t fully conquered playing in the wind, but the mental game is strong going into tomorrow.”

Tangaree’s James Hewitt was the only player to break par on the day after shooting an 85 on Day 1. The Ulster Interpro shot a one-under round of 70 on Saturday and comfortably made the cut on +13.

“I didn’t know where the ball was going yesterday, but I found something out there today. I was overthinking the swing a little yesterday. I felt I didn’t play that bad, but was punished for some poor shots.

“The 85 yesterday, didn’t feel as bad as it was. I tried to make level par today and to make the cut. In the circumstances, it’s one of my best rounds of the year.”

The shot of the day went to Scotland’s Cormac Sharpe. A hole-in-one on the treacherous 12th came after he almost got another on the 5th.

“I was struggling up to the 12th. It was all about getting on the green. I didn’t even see it go in, but I heard the people at the green go mental. I was in shock when it went in.

The cut line fell at +17 with 50 players advancing to Sunday’s final round.