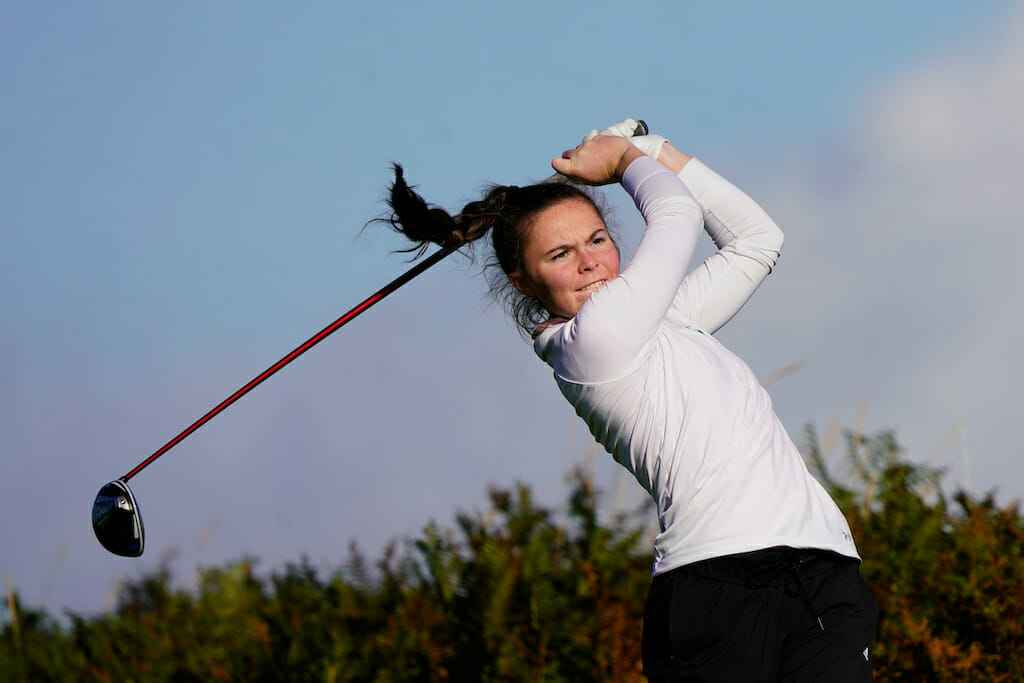 Aada Rissanen (Finland) holds a one-shot lead after the opening round of the Irish Women’s and Girls’ Amateur Open Championship at Co. Louth Golf Club. Benign autumn conditions allowed for low scoring on day one with the top-10 players all shooting under par on the Baltray links.

Rissanen, who carded 5 birdies and an eagle in her six-under par round of 68, admitted this is a career best score for her.

“It was my all-time best round, so I’m very happy to start this tournament with that,” she said. “The course played somewhat easy today, I got a lot of good rolls from my drives so some of the par fives were short and I made some very good putts to make some birdies.”

The wind could play a factor over the remaining 36-holes with gusts strengthening as the weekend progresses, however Rissanen is confident she can handle any worsening conditions.

“We don’t play links golf in Finland but I’ve played some, and I’m prepared for the wind to change directions, maybe it will get windier over the next couple of days but that’s OK.”

Sweden’s Moa Svedenskiöld and Charlotte Back (Germany) are tied for second on 5-under while Kirkistown Castle’s Beth Coulter is tied for fourth on 4-under alongside Tesssa Kremser, also from Germany.

“I didn’t do anything spectacular really,” said Coulter, whose first round included 6 birdies. “A couple of par fives I made some silly mistakes but on the par fours I gave myself some good chances for birdie and hit some good wedges in.”

Coulter had a hectic summer schedule, including her runner-up finish at The Girls’ Amateur, but has returned to playing Camogie with her club Ballygallet since September.

“After the Girls’ Amateur I wanted a little bit of a break and to slow things down, so I got back into camogie the last few weeks and enjoyed that.”

The wind is also on her mind heading into the weekend but it’s something Coulter is very used to playing in.

“I was surprised with the conditions today, we’ll never get a day like that again – it was so sunny and very little wind so hopefully that will blow a bit more tomorrow and play into our favour.”

Play resumes from 8.15am on Saturday morning and the field will be cut to the top 50 and ties for the final round on Sunday.