Harrington struggles on Champions debut but Clarke right in the mix 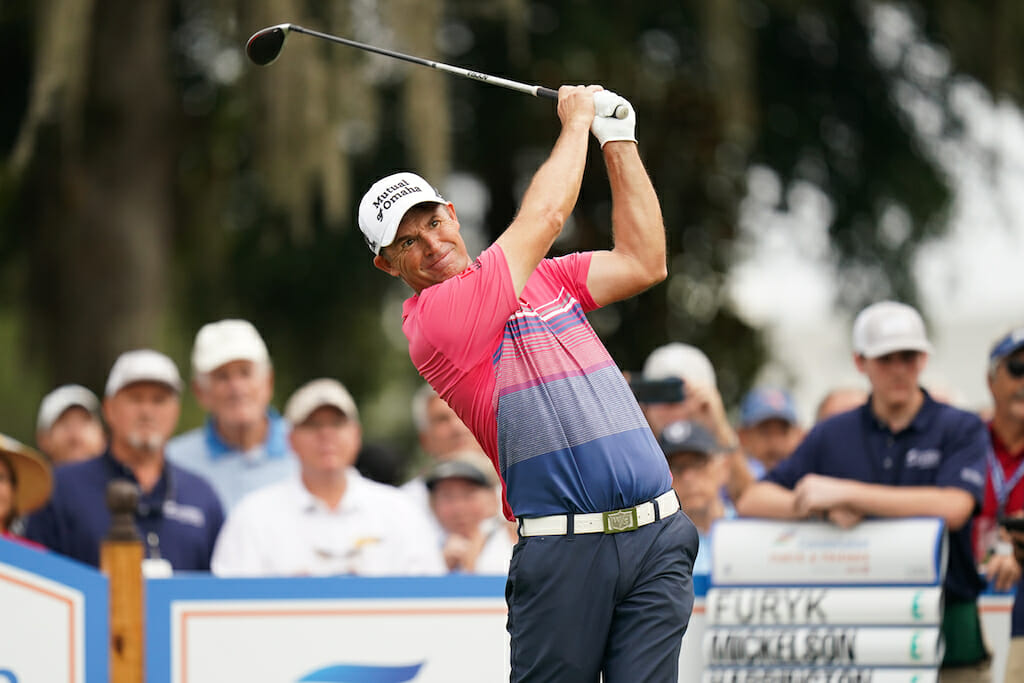 Padraig Harrington’s PGA Tour Champions debut didn’t quite go to plan but Darren Clarke is right in the thick of the action near the top of the leaderboard after a weather-affected round one of the Constellation Furyk & Friends in Jacksonville, Florida.

The European Ryder Cup captain had birdied his first ever hole on the seniors’ tour but was rudely brought back down to earth with a double-bogey at the second, and he would eventually go on to sign for a two-over 74 to sit tied-58th after day one.

A birdie at the eighth had him back to level-par by the turn, but Harrington would fail to gain another stroke on his back nine, instead bogeying the 12th and 15th to sit eight shots back of Matt Gogel and current US PGA champion Phil Mickelson, who both opened with six-under 66s.

Clarke, however, is just two strokes off the leaders after he finished strongly at Timuquana Country Club with three birdies in his final six holes for a four-under 68.

The former Open champion had started well with back-to-back birdies at the second and third, before bogeys at the sixth and eighth were offset by birdies at the seventh and ninth to keep him two-under as he headed to the back nine.

He quickly dropped back to one-under again with a bogey at the 11th, but his excellent finish saw him gain strokes at 13, 15 and 18 to move up to four-under and within striking distance of the two leaders.

Mickelson is obviously the more high profile of the two leaders, the six-time Major champion going for his third PGA Tour Champions victory after opening with seven birdies and one bogey in his 66, which could have been even better only for him to drop his only shot of the day at the 18th.

The 51-year-old saw his round halted midway through by a rain delay, but he battled on afterwards to sit top of the leaderboard despite admitting he didn’t feel like himself after the resumption of play.

“I wasn’t quite on when we got back out there, I just was a little bit off. I hit a few wayward shots, I just didn’t feel great, but fought to finish the round off and try to regroup for tomorrow,” he said.

“It’s a good start, though. I didn’t do any damage and made some good birdies on that front nine and I’ll try to get that level of play back for tomorrow.”

Mickelson and Gogel’s lead is just one shot over Cameron Beckman and Frank Lickliter II, who both opened with 67s, while Clarke is joined by seven others, including Bernhard Langer and Robert Karlsson, in a tie for fifth at four-under.