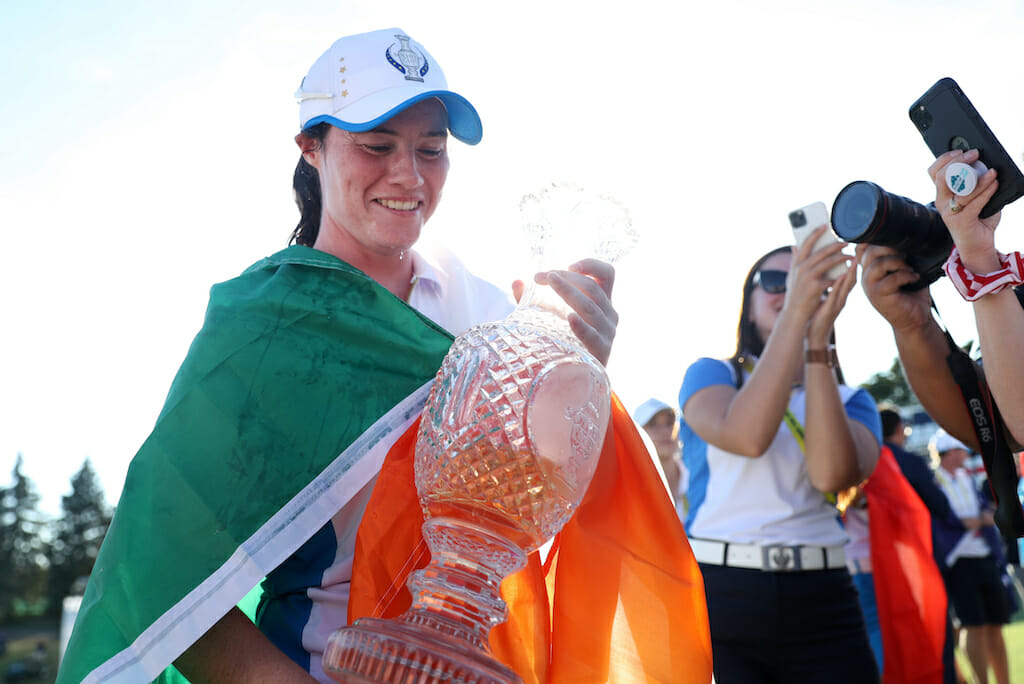 It felt like the entire County of Cavan had turned out to catch a glimpse of Solheim Cup hero Leona Maguire upon her eagerly-anticipated homecoming following an historic Solheim Cup showing.

The 26-year old rookie was the star of Team Europe, leading Catriona Matthew’s side to victory with 4.5 points from a possible 5, the highest individual tally by any European in the 31-year history of the event.

A BIG THANK-YOU from @leona_maguire to ‘her people’ ☘️???? pic.twitter.com/LqP7UjUq5J

Hundreds of people gathered at PGA National Slieve Russell where Maguire honed her craft long before announcing herself on the world stage but after last week’s heroics in Toledo, the LPGA player is firmly on everyone’s radar around the globe.

“It’s been amazing,” Maguire said. “Dad’s been sending me pictures and videos. The amount of messages I’ve been getting over the last few days has been incredible. I’m a proud Cavan woman and it’s nice to come back here.

“I’d just like to say a massive thank you to everyone who’s turned out. It’s great to see so many Cavan jerseys and tricolours and European flags.”

Forever working towards plugging the gender gap in sport, Maguire is one of a number of women in Ireland excelling at the very top of their chosen crafts and she’s hoping the momentum can inspire the next generation of young girls, and boys, to chase their dreams long into the future.

“Yes, it takes a lot of hard work but absolutely anybody can achieve it. I have, Ellen Keane has, Kelly Harrington has, the Meath footballers have, Katie Taylor has, Katie George has and Eve McCrystal has,” Maguire said resolutely.

But as dad, Declan points out, it takes a lot of hard work and dedication to create a homecoming like this one.

“It looks glamorous on the outside…but there’s a lot of hard work and sacrifice behind the scenes,” he said.

No doubt Maguire’s success will serve as ample motivation to those would be stars to knuckle down and chase their dreams:

“To all the little girls with big dreams… chase them. It won’t be easy – but I promise you it’s worth it,” Maguire said.