Nordqvist pleased to finally have her husband on her side 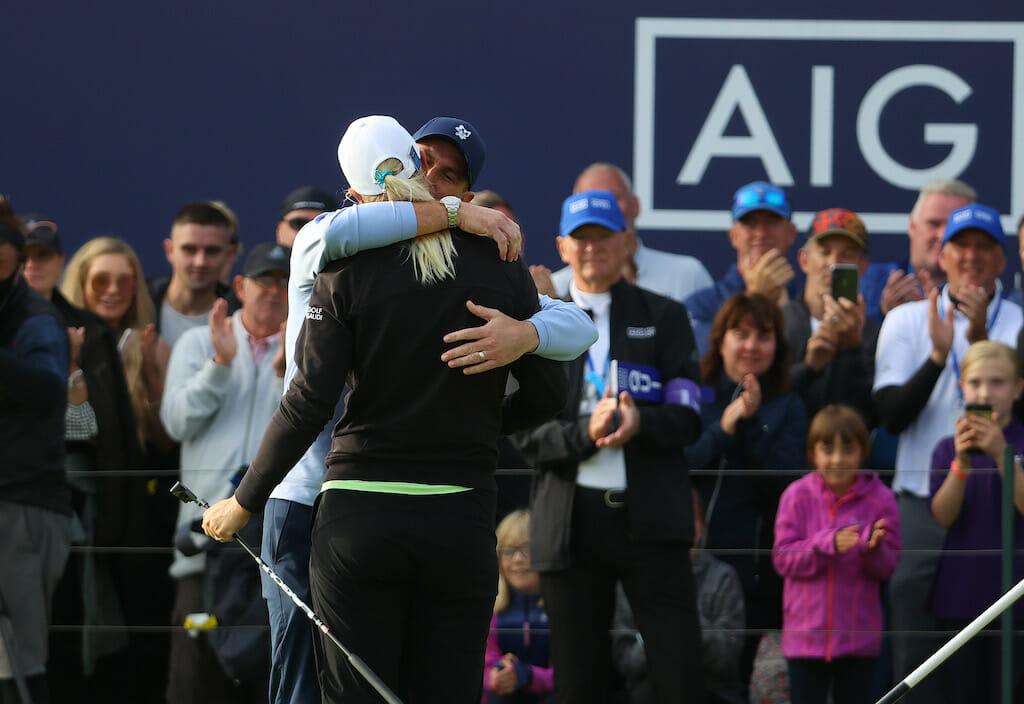 Anna Nordqvist with husband, Kevin McAlpine, on the 18th green after winning the AIG Women's Open at Carnoustie (Photo by Andrew Redington/Getty Images)

No sooner had Anna Nordqvist captured a third career major at Carnoustie that she found herself on the 18th green in a loving embrace with husband Kevin McAlpine.

That was very different to 2017 when McAlpine, then Nordqvist’s boyfriend, was caddying for USA team rival Lexi Thompson in Des Moines, Iowa. Thompson, with McAlpine as her caddy who she had first teamed-up with months earlier in the 2017 Women’s Open at Kingsbarns Links, was out in the opening Sunday Singles match against Nordqvist.  The match was halved and while Europe halved the Singles, they lost the bigger battle 11½ to 16½.

This time though McAlpine has travelled to Toledo, Ohio and will give his 100% full attention in offering moral support to his wife, with the couple to be married in a bigger ceremony upon their return next week to Scotland.

Nordqvist said: “Having to play Lexis in the singles with Kevin on her bag wasn’t my favourite moment.

Nordqvist is one of Europe’s big guns with the experience of six prior Solheim Cup appearances in succession since her debut in 2009 while the now 34-year-old Swede has been on three winning teams including Catriona Matthews 2019 Gleneagles victory side.

If there was a Solheim Cup career moment for Nordqvist it was on her European debut in 2013 at Colorado where she aced the 17th to win the first match on day two of the event with Europe going on to win for the first time on US soil.

She said: “Colorado was obviously a really memorable one for Europe, winning on U.S. soil for the first time. It was nice and quiet that week, especially at the end when we were winning.

“So, a few of us girls on this year’s team were there in 2013 and I think the girls that weren’t there, they’re very motivated to try to do the same thing this week. I feel like we have a good team.”

And Nordqvist revealed it was not all plain-sailing heading back to the States immediately after her win at Carnoustie.

She said: “I managed to get the trophy home safely to the U.S. I had to leave the house at 4 a.m. to catch my flight. I didn’t have much to drink, but I was exhausted because I forgot my computer in security and I didn’t realise until I got to London.

“So, we had a great dinner, just seeing friends and family, and I was excited to get back to the U.S. after 10 weeks on the road.”