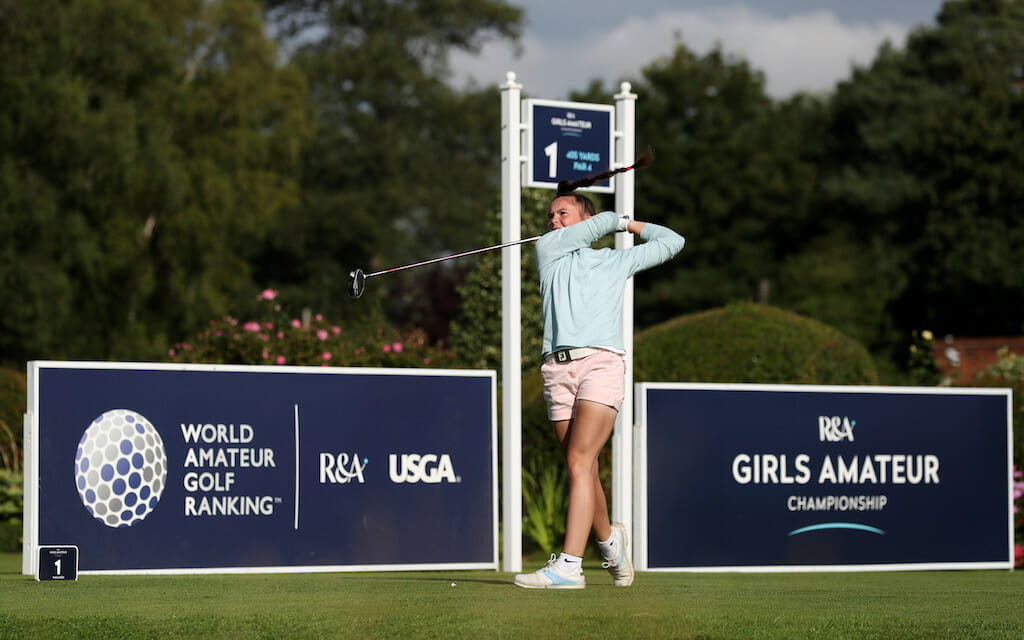 Kirkistown Castle’s Beth Coulter will fly the flag for Ireland in the knockout stages of this year’s Girls’ Amateur after safely negotiating her way through 36-holes of stroke play qualifying at Fulford.

Coulter, who successfully defended her Irish Girls Close title last month, added an even par round of 74 to her opening 75 to advance in a share of 15th at one-over par, nine shots back of Rachel Gourley who maintained her position at the top to lead stroke play qualifying.

The 17-year-old carded a new women’s course record at the Yorkshire venue after an opening eight-under-par 66 and followed that with a steady level-par 74. Gourley, a winner with England at the R&A Girls’ Home Internationals last week, progressed to the match play stages as the leading qualifier with her eight-under-par total, two shots ahead of compatriot Lottie Woad and Scotland’s Hannah Darling.

“It was quite testing for me today but I stayed patient and tried not to get too annoyed at bad shots,” said Gourley. “Eight-under was a hard score to follow up but I knew something around level par would get me through the cut and onto the match play.

“I love the course. I’ve played it so many times. To be able to come and play a national championship here is good fun. I’ve just got to keep it going. I think my putting is a strength this week. It’s quite a difficult course and the greens are big so holing short putts and having pace control is the key for me.”

Coulter faces Woburn’s Roisin Scanlon at 7.40am in her first round match on Thursday.

Meanwhile, Jack Bigham of England led the qualifiers into the match play stages of the R&A Boys’ Amateur Championship at Royal Cinque Ports as 144 players became 64 at the end of the second round of stroke play qualifying.

Carding a bogey-free five-under-par 67, he finished on a total of eight-under-par for the two rounds of qualifying. He raced clear of second placed qualifier Jamie Mann after the pair were locked on three-under-par after the first round yesterday.

Ireland will have a quartet of hopefuls gunning for a great run in the match-play with Blainroe’s David Lally, Athlone’s Charlie Kelly, Roganstown’s Sean Keeling (all +9) and Roscommon’s Cian O’Connor (+10) all advancing to the first round of knockouts.