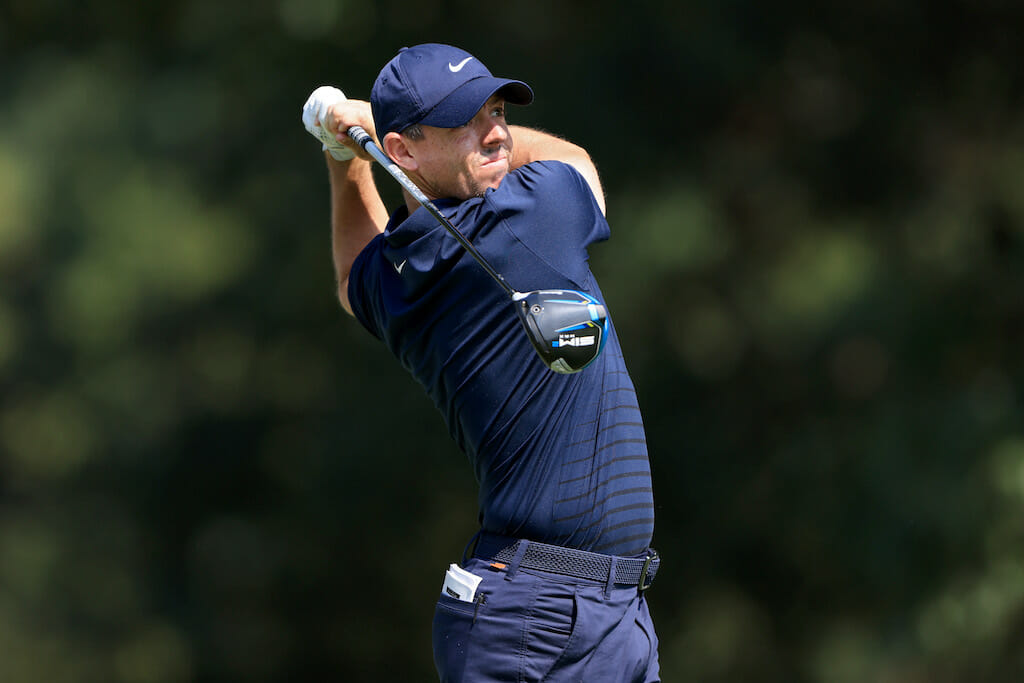 Rory McIlroy kept on ‘Route 66’ for a second day running to boost hopes of a top-10 finish at the WGC – FedEx St. Jude Invitational in Memphis.

McIlroy made a big leap up the board early in his third round with a hat-trick of birdies from his second hole and none better than at the par-4 second hole where he holed a 17-footer for birdie.

The four-time major champ then moved to four-under for his round in holing a six-footer birdie putt on the par-3 eighth hole and while dropping his only shot of the round at the 10th, McIlroy birdied the par-4 13th for a first time in his three rounds before closing out with five straight pars in the very hot and humid conditions.

McIlroy’s third round 66 of five birdies and just one bogey was a mirror of his second round 66 that saw him head to the TPC Southwind clubhouse then sharing 21st place in the $10.5m event. And in revealing he packed a new wedge in the bag for Friday’s 66, McIlroy indicated a ‘shorter’ driver has also helped this week in teeing-up in the city made famous by the likes of Elvis Presley, Aretha Franklin, Morgan Freeman, Shannen Doherty, Justin Timberlake and so many more.

“I went to a slightly shorter driver just before the U.S. Open, which has helped and then I tweaked it slightly like a quarter of degree less loft for the Scottish Open,” said McIlroy.

“I just feel like I’ve got a little more freedom with it. I’m not squeezing it as much, I’m not trying to get on top of it as much as I was. Like I know what I do well with the driver, I’ve done it my whole career. I turn big, wide, sort of wind up and then sort of hang on my right side and throw my arms and my body at it.

“I was trying to go away from ‑‑ go away from using my talent and my hands and trying to just sort of do it all with body turns and try to make it very mechanically efficient.

“I sort of came to the realisation that I’m pretty good with my hands and I’m pretty good at matching it up and it’s okay to rely on your talent. I’ve always been a little uneasy with the “talented” tag because I feel like I work hard and it was probably a part of my mentality and my ego to go, no, I’m going to drive the ball well with hard work and dedication. But if that’s my talent, I may as well use it to the best of my ability.”

And McIlroy had a real honest, very McIlroy-like reply when asked how he came to such a realisation.

“I was just from driving it like crap for a while basically,” he said smiling. “Why don’t I just do like I’ve always done, a little more freedom with it as well, which has helped.”

However, with back-to-back 66s and as the third-round leaders still had to make the turn, McIlroy’s quest now on day four is to go as low as he can.

“I mean, just go out and shoot the best score possible,” he said.  “I know that I’m probably not going to win the golf tournament. I was resigned to that fact on Thursday night. It’s just about making the most of the next three days. I’ve played well the last couple days and I want to play well again tomorrow and it will be nice to go into a little break, a week off, playing three solid rounds of golf.”

McIlroy’s Olympic Games team-mate Shane Lowry managed four birdies in a three-under par 67 to be tied with McIlroy on six-under par. The pair won’t be playing together on Sunday, however, after the Clara golfer was drawn alongside potential Ryder Cup rival and Scot Robert MacIntyre for the finale.

Lowry bogeyed his fifth hole but then played the last 10 holes in four-under, including brilliant back-to-back birdies at the 15th and 16th holes. The pick of Lowry’s was holing a 12-footer at the island green par-3 11th hole with the Offaly man five shots outside a top-10 finish as he chases another big weekend on Tour.