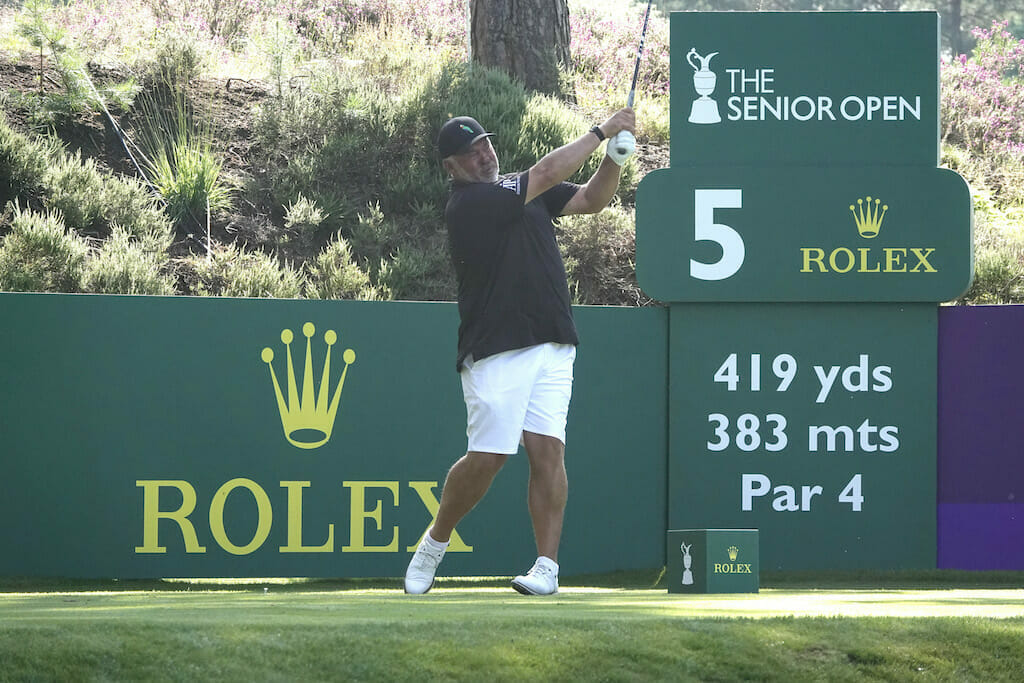 It couldn’t be any more comfortable for either Darren Clarke or Paul McGinley in teeing-up at this week’s Senior Open Championship on host venue Sunningdale.

Clarke is among a dozen major champions with both he and McGinley joining eight other Ryder Cup captains teeing-up on the famed Surrey course, only a short drive from European HQ at Wentworth.

The soon-to-be 53-year-old Clarke has been competing on the Legends Tour since August 2019 and it was not till late last year and earlier this year that Clarke broke through to win in the over-50 brigade. This week majors a 10th Seniors major for the Dungannon-born Clarke who secured a share of 10th in the 2019 Senior Open at Royal Lytham.

Clarke, who last week returned to Europe for a first time, is coming off the Royal St. George’s anniversary of his Open Championship victory.

“I’m looking forward to it as any time you get a chance to get back to Sunningdale is great,” said Clarke. “I played a lot of golf here. I used to live five minutes away. The ex-club professional here, Keith Maxwell, introduced me to Sunningdale in the late ’90s and I’ve played so much golf here, especially with the weather good as this, the golf course is pristine. It’s a beautiful walk.

“I can’t sing its praises high enough. It’s a beautiful walk. The golf course is in sensational condition. There are birdie opportunities out there but already there is bogeys and double-bogeys, if you don’t know what you’re doing or hit it in the wrong place. But it’s a wonderful walk. Any time I get a chance to come back and play Sunningdale, I love it.”

As mentioned, Clarke is a now a double winner on the Champions and while it did take some time to break his victory ‘duck’, the Northern Irishman is one of those to be wary of this week.

“I enjoy getting back in contention and giving myself opportunities to win,” he said. “I haven’t won since January at our Tournament of Champions at Hualalai, and looking forward to get back in the mix at this level.

“You get into tournament play, you’re a professional golfer, and you go out and go do it. In terms of how hard it is to stay competitive, you want to stay competitive but you’ve got to putt the hours and the work in. I think if anybody needs to take a look, you’ll see the putting range is busy. The guys work just as hard now as they did on when they were on main tours.”

Adding to Clarke’s confidence, and a trait he’s never found wanting, is his record in the Senior majors with two top-10s and also including a best of a share of eighth earlier this year in the first major of 2021 – the Tradition in Birmingham, Alabama.

“The majors are all majors but they are the ones we want to win more,” he said. “Sometimes it’s easy to get ahead of yourself, and this is a really important tournament — it is, but it’s not. You want to play well if you want to win them but at the same time if you put too much pressure on yourself and expect too much of yourself, that’s when you make mistakes.

“It’s going to be a wonderful challenge, and if the weather stays like it is, I think we’re going to have a very exciting week of golf.”

Joining Clarke, as the only other Irish golfer, is McGinley who lives with his family on the Sunningdale estate. McGinley is out in the company of his fellow SKY commentator and PGA winner, Rich Beem and also Jerry Kelly at 8.10am. Clarke tees-up in the company of Ernie Els and Jose Maria Olazabal at 1.10pm.