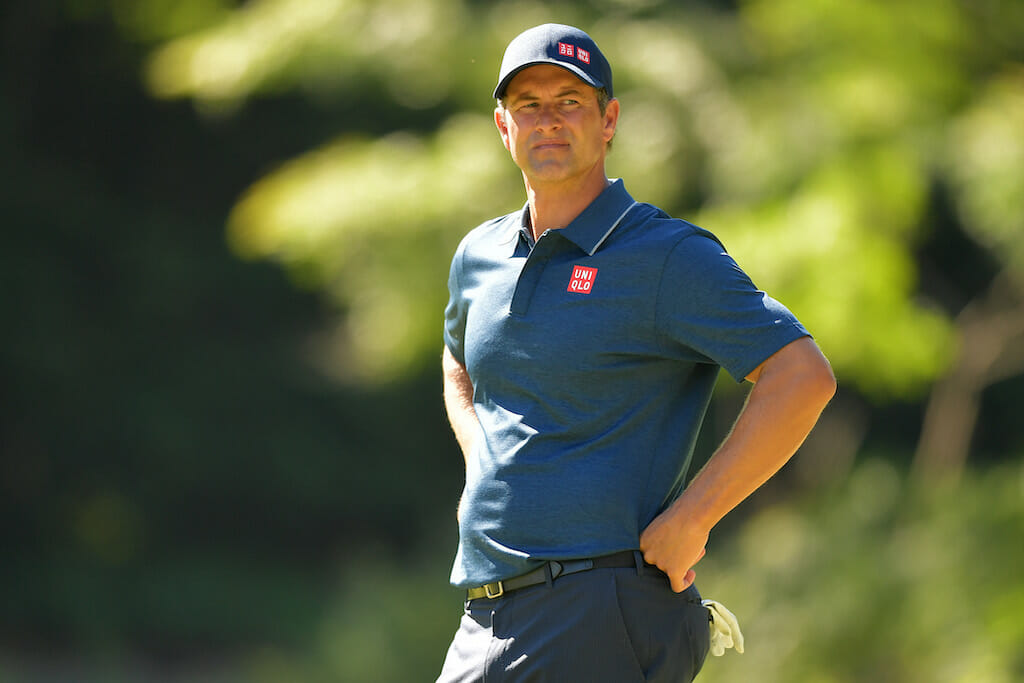 Adam Scott would dearly love to keep the Aussie winning streak going with a victory at this week’s Open Championship.

Scott, who turns 40 on Friday, is contesting a 22nd Open Championship and, in fact, has not missed teeing-up in golf’s oldest major since making his debut in 2000 at St. Andrews. Scott’s best effort in The Open was in 2012 but only after the disappointment of bogeying his closing four holes to finish runner-up to a surprised winner in South African Ernie Els. And while Scott would create Australian golfing history in capturing the 2013 Masters, his efforts nine months earlier at Royal Lytham and St. Annes was a major that surely got away.

Scott is among a big contingent of 11 Aussies in this week’s rescheduling of the 149th Open Championship and among those is the recent back-to-back winners on the European Tour in Victorian Lucas Herbert, capturing the Dubai Duty Free Irish Open and Min Woo Lee, who brilliantly won last week’s Scottish Open.

Some six hours after Herbert reigned supreme in Ireland, Sydneyside Cam Davis captured a maiden PGA Tour title in winning the Rocket Mortgage Classic in Detroit, but he has not travelled to the UK. As well, Australia’s Ashleigh Barty reigned supreme last Saturday in winning at Wimbledon with the tennis-loving Scott delighted for Barty.

“I’m a tennis fan, and like everybody in Australia I’m a huge fan of Ash,” said Scott.

“She’s brilliant. She’s having a great year, too. To win Wimbledon, it’s like winning The Open or the Masters, isn’t it, for a golfer. It feels like that. So, it is incredibly significant. She played great, and it would be fun to keep that Aussie theme going and kind of take Wimbledon away from the UK and The Open trophy. That would be great.”

Of the 11 Australians teeing-up this week in rural Kent, three earned direct entry into The Open by winning sanctioned tournaments with Matt Jones capturing the 2019 Australian Open in Sydney and both Herbert and Lee earning their Open tee times by winning in the past two weeks. And Scott was asked if this Aussie ‘feel good factor’ could rub off on the champion Australian this week.

“For me The Open now is, if we had to rank tournaments you’d love to win, that sits clearly at the top,” he said.

“I felt like I had a hand on the Claret Jug once, and it was a good feeling while it lasted. I’d like to kind of have two on there. But if there is one event I’d like to win before my career is out, it would be The Open. I’m not really stacking the pressure on myself this week, but it would be a lovely story for an Aussie to follow in Greg’s footsteps here.”

And in talking of Greg Norman, he remains the last Australian to win The Open with his stunning 1993 victory at Royal St. George’s when he produced one of the finest final rounds, a six-under par 64, to deny arch rival Nick Faldo by two shots. Norman’s four-round 267 tally was the then lowest in Open Championship history with the then World No. 3 capturing a second major championship as Alan Border and his eventual 1993 Ashes winning team-mates looked on.

And Scott, as a then 13-year-old, recalls staying up into the early hours on a Monday morning (Australian time) watching Norman power his way to victory, and the impact it would have on his own golfing career.

“I think it was the most impactful time as I was really into golf at that point,” said Scott. “I’d stopped playing other sports and I was a golf nut, and it was right around that time that that happened. I remember staying up and watching the end, falling asleep for a little bit here and there because it was really early in the morning.

“You know, yeah, strong images of the whole round, that final round of Greg’s really. It was quite inspiring. I think it was the perfect victory and timing for me, looking back on it and wanting to just be out there doing what Greg did.”

Helping Scott to add the Open Championship to a golfing CV boasting 31 victories around the globe, is the fact he’s been in the UK for the past 10-days working on his game, and mainly at the exclusive Queenwood club in leafy Surrey.

“I usually come over at least 10 days before, and I pretty much stay at the venue where we’re playing,” he said. “However, I had to do kind of the isolation for a few days here, test out after five days, so that was a bit restrictive, obviously, and then got down to St. George’s a bit last week.

“However, I left; I didn’t stay there the whole week. I kind of went down for a couple of days and came back and practised at Queenwood, which is where I’m a member over here. I have been for 20 years since I’ve played the European Tour.

“And just really kind of balanced my time and energies and everything spent practicing. Usually, I would be down at St. George’s by now and playing the weekend; however, slightly different with the bubble-type setup this year.

“I felt like if I got my work in early, I could come in a bit later and just not treat it like a regular event but come in a bit more fresh and play a practice round on Wednesday because I know the course now, and get ready to go and conserve the energy and not be so influenced by some of the restrictions that the bubble has with guys down there.”