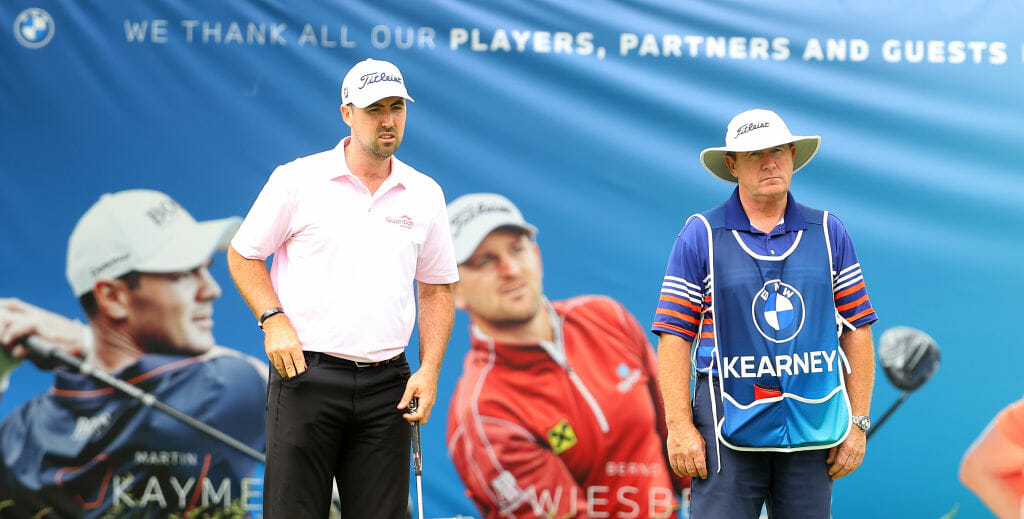 Niall Kearney brilliantly took to the overtaking lane to muscle his way into contention heading to the weekend rounds of the BMW International Open in Munich.

Kearney added a four-under par 68 to his sizzling opening 65 to remain atop of the board at 11-under very late on day two of the event.

Kearney, 36 is making a mockery of his first look at the Munich Golf Club course having dropped just the one shot, and that was at his 35th hole after two rounds of the Euro 1.5m event.

The Royal Dublin pro had been one of the last into the field with his opening round curtailed late on Thursday due to heavy rain, leaving Kearney at six-under par with two holes to play.

He was in early on Friday to birdie his 18th in an official first round seven-under par score to give Kearney a share of third place.

After a short break, Kearney was back out and into his second round, grabbing four birdies in 11-holes to move to 11-under before a bogey on 17 but with Dubliner grabbed a fifth birdie of his round at the last.

Kearney then singled out the key to his superb two rounds as arriving into the Bavarian capital feeling ‘fresh’ following a fortnight’s break from having a scorecard in his back pocket.

“I just feel really fresh as I’ve been home the last couple of weeks and I’ve had plenty of time to rest,” he said.

“I had been traveling prior to that quite a bit and it was great just to get home and recharge and then get back out.

“Also, the golf course is fantastic and it suits my eye. It’s old-fashioned with avenues and it’s quite tight off the tee and I am really enjoying it”.

The rest has clearly benefited Kearney as it was six weeks ago he posted a European Tour career low of 61 to finish fourth in the Canary Islands Championship but since then he’s missed the cut in the last three events.

His German effort makes it four cuts from eight events this 2021 season with Kearney now assured of improving his current 133rd Race to Dubai money-list standing.

And the way Kearney’s taken to the Munich course you definitely cannot rule out him joining Jonathan Caldwell as the Tour’s newest champion.

“It’s a great opportunity,” he said.

“This year has been great for me. I am getting lots of starts in really nice tournaments and I have obviously got to try and take the opportunities as well.

“I got off to a decent start down in Spain in the Canaries and I’m trying to march on from there really”.

In contrast, European Ryder Cup captain Padraig Harrington posted scores of 72 and 71 to miss the cut by a shot.

Caldwell also missed the cut with scores of 70 and 75 for a three-over par tally while Paul Dunne was also headed home early with a pair of 73s.