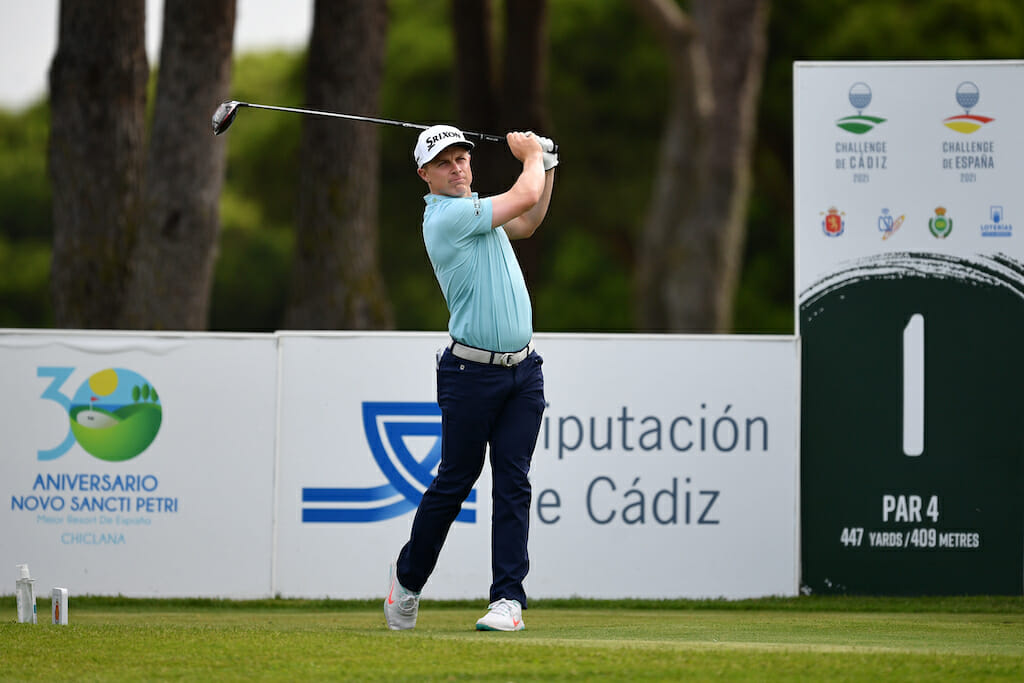 Portmarnock’s Conor Purcell was delighted with his work to the halfway point of the Challenge de Espagna, just one shot back of the lead despite two late bogeys on day two in Cadiz.

Looking to build on an opening day 65, the Dubliner raced out of the traps with four birdies in his first five holes to move through and lead at 12-under par, however he couldn’t keep the scorching pace going. In the end it was a three-under 69 for Purcell, good enough to be sharing third and right in it with two rounds to go at Iberostar Real Club de Golf.

“If you had asked me yesterday morning that I would be ten under par after two rounds, I would have bit your hand off” ?

“If you asked me yesterday morning that I’d be 10-under after two rounds, I would’ve bit your hand off for it,” Purcell smiled. “It’s just when you start so quickly like I did today and you finish three-under, you’re a but disappointed, but no, it’s been a good two days.”

Having tied 34th at the same course last week with a five-under tally, Purcell has played much more aggressive this time around, kick-started with his opening 65 while it looked like he was about to go into overdrive on day two in Spain.

“It’s one of them where you’re trying to back up a good score with another,” he said. “I hit it to two feet at the first which got me going early and the birdies just kept coming. Last week when I was here I probably thought it was going to play more difficult than it turned out to be. I knew with the scoring last week that it would just keep going this way, greens a bit softer too so it was good to take advantage.”

Playing off invites this year, the 23-year old knows the importance of taking full advantage of his chances, especially after a start like this.

“With the way things are this year, and obviously I’m just playing off invites, you need top-5 finishes on the Challenge Tour so we’re just going to try finish as high as we can and see where we are with the invites at the end of the year. It’s going well so far,” he added.

With a sharp halfway cut falling at four-under par, Purcell is the only Irishman progressing to rounds three and four after Michael Hoey (-2), Robin Dawson (-1) and Paul McBride (even) all missed out.