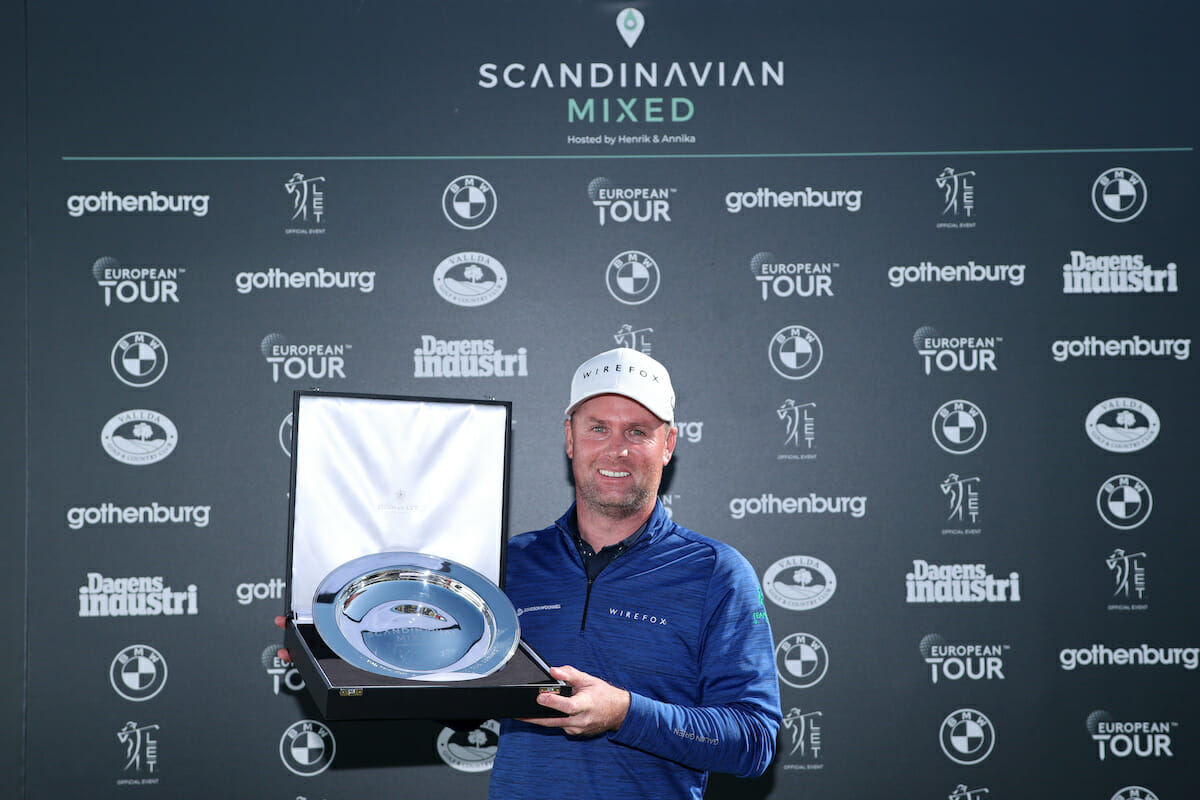 Jonathan Caldwell of Northern Ireland poses with the trophy after his win during the final round of The Scandinavian Mixed Hosted by Henrik and Annika at Vallda Golf & Country Club on June 13, 2021 in Gothenburg, Sweden. (Photo by Warren Little/Getty Images)

The Northern Irishman entered the final day at Vallda Golf and Country Club three shots off the lead but carded a stunning closing 64 to get to 17 under and set the target.

Spaniard Adrian Otaegui had a chance to win it on the last but three putted the 18th for the only bogey of his 67 to sit a shot off the lead.

In a week where the European Tour broke new ground with a field of 78 men and 78 women playing over the same course for the same trophy, England’s Alice Hewson carded a closing 69 to finish third at 15 under, two shots clear of Australian Scott Hend and England’s James Morrison.

It has been a long road to the winner’s circle for Caldwell, who first came through the Qualifying School in 2008 but since then had played just 47 events on the European Tour coming into this week.

He claimed two wins on the EuroPro Tour in 2016 and 2017 and made his way back to the European Tour via the Qualifying School in 2019 after a decade away.

But he will now have no worries about his playing privileges for the foreseeable future, and cut an emotional figure as he was interviewed after his victory.

“It’s been a dream of mine for an awful long time,” he said. “A lot of hard work goes into it. It hasn’t quite sunk in yet, but hopefully more to come.

“In 2009 I played my first year, lost my card, played mini tours and Challenge Tour over the years, worked as well in a local golf store. It’s been a long road but finally I’m here.

“The golf club at home will probably be going bonkers so just put a tab on and crack on boys and enjoy.

“My parents have been with me the whole way so I look forward to talking to them tonight.”

On a groundbreaking week in golf, Caldwell added: “It’s been a tremendous week, I think what they’ve done this week is fantastic and I hope we have more weeks like this. The golf course was fantastic and I played with some great girls this week.

“I got a fist pump from Annika when I came off 18 which is pretty incredible – probably the greatest ever ladies golfer so that was pretty special.”