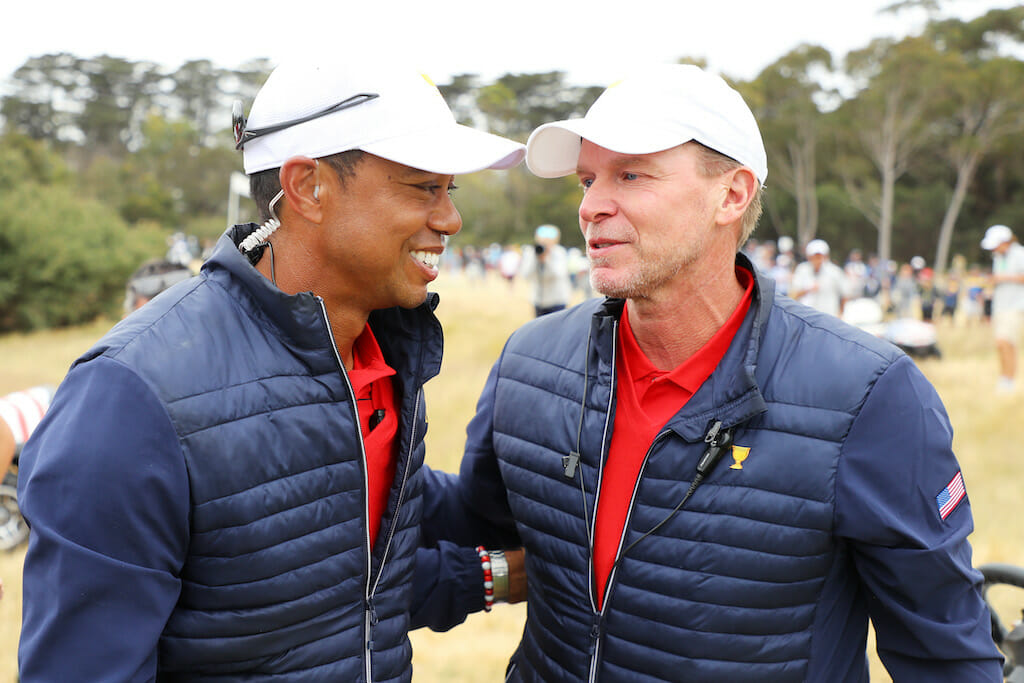 Tiger Woods is yet to be officially involved in this year’s rescheduled Ryder Cup but it’s not stopped him being ‘totally vested’ in the lead-up to September’s showdown according to USA captain, Steve Stricker.

With just four months to the start of competition along the Lake Michigan shoreline, Stricker says Woods has been involved in almost every part of the pre-competition arrangements despite still being on crutches since his near fatal car crash earlier this year. Stricker’s insight comes with Woods probably certain to find his way to Wisconsin, in some form or another, in September that will clearly be a huge motivational lift for the Americans.

“I’ve talked to Tiger and I don’t know if we are there yet to commit to him being there; he’s still got a lot going on and his spirits are great, though, as of late. We were on a Zoom call with him just this last week and he seems like he’s in a better place,” said Stricker.

“Like I said, though, he’s still got some ways to go but yeah, I’d love to have him there. Who wouldn’t, right? The guys really respect him and he did a great job obviously as a captain but he was an assistant captain of mine in 2017 at the Presidents Cup and he was unbelievable. He would do anything for you and he’s totally, totally vested in the situation and the process and almost to the point of he’s on it early and so much, it’s like, ‘dude, we’ve still got months to go yet’.

“He’s really good at being interested and being an assistant and I’d love to have him be there if it’s at all possible.”

Stricker’s first appointment as a vice-captain was Jim Furyk while in May last year, he added Davis Love III and Zach Johnson. Woods had been named a vice-captain under Furyk for the 2018 Ryder Cup and a year later greatly impressed with his captaincy skills heading his victorious 2019 USA Presidents Cup team at Royal Melbourne in Australia. Though Woods, as mentioned above, is yet to be officially named as an assistant for Stricker.

And it was asked of Stricker, ahead of this week’s PGA Championship, if in speaking with Woods that he would learn much in talking to Tiger..

“Sure. To that point, I don’t know if I can be there or not but you know I’m here for you all the way up to The Ryder Cup,” said Stricker. “That shows his level of commitment to me to the team and his desire to be there if he can be.”

And Stricker was definitely in a bubbly mood speaking of Woods, a former long-time partner in Ryder Cup competition, as evident when asked:

“So, what was the purpose of the Zoom call to Tiger?”

Stricker replied, smiling: “I can’t tell you. No, it’s all little stuff at this point, really, it is. I just don’t even remember what the call was about… Actually, it wasn’t even about The Ryder Cup. It was actually about something else to tell you the truth, to be quite honest, it was.”

And to round off his press conference, Stricker spoke of the responsibility he carries into the Ryder Cup as captain.

“It’s a big responsibility, but I’ve grasped it with gratitude and a humbleness. I’m excited to do it. You know, it’s in my home state of Wisconsin. The Ryder Cup has meant a lot to me over the years. I’ve been on one of the winning teams in 2008 which was a thrill. A couple of the other ones we could have won, kind of thing.

“I’m excited. I wish we would have played it already but I’m still looking forward to September and that opportunity to win the Cup and bring it back home. So I guess the biggest word I can use, the best word, is I’m just humbled by it and thankful to be able to do it.”