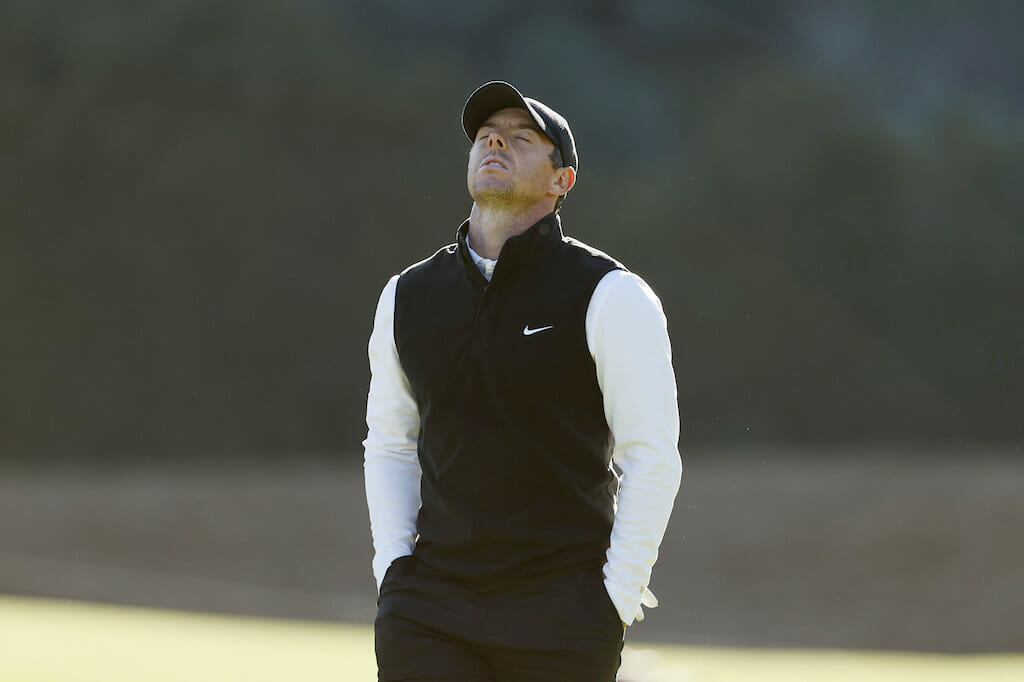 Fellow PGA Championship winner Rich Beem reckoned Rory McIlroy would have been home in time for a late supper in missing a first tournament cut in 19 months after a disappointing showing at the Genesis Invitational near Santa Monica.

McIlroy was relegated to a ‘bit part’ on Hollywood’s golf course of the stars with scores of 73 and 76 for a seven-over par total to plunge to just a few spots from the cellar in the 120-player Riviera field. Sam Burns extended his lead on Friday, adding a five-under par 66 to his opening 64 to take a commanding five shot advantage at 12-under into the weekend.

Longest active cuts made streak on Tour (25) will end today for Rory McIlroy.

117 events shy of Tiger’s recognized record of 142. Based on average starts his last 5 seasons, Rory would have had to keep the streak going through the 2028 Arnold Palmer Invitational to pass Tiger.

“I’d like to think that I have all the tools to win out here. Obviously there’s a lot of good players, really, really good players. I think just having patience out there. I didn’t try to force anything. Whenever we were kind of in a tricky spot, just kind of took what the golf course gave us.”

Meanwhile the golf course gave McIlroy a beating in his first missed cut since the 2019 Open Championship. It was also McIlroy’s highest opening 36-hole tally since his 10-over par effort in missing the cut at the 2018 US Open Championship at Shinnecock Hills. In his only three other Riviera showings, McIlroy was a combined 16-under with efforts of T20th in 2018, T4th in 2019 and T5th a year ago.

McIlroy could manage just three birdies over his two rounds and soured his two rounds with eight bogeys and a 35th hole double-bogey ‘6’ when his drive found a ‘native area’ less than a 100-yards from the green before taking five shots to hole out. Indeed, McIlroy found just half of 14 fairways on day one but just five on day two, including not one fairway over his second round closing nine while his tee-shot at the last, the uphill par-4 ninth, was so far left he was on the third fairway,

Once on the ‘dance floor’ over the two days, McIlroy recorded 31 putts on day one and a horrid 35 putts on day two of the €7.7m event.

“He’s always been slow out of the box but I didn’t see this performance coming,” said Beem commentating for SKY Sports. “It’s just two days forget and the only good thing for McIlroy is that if heads straight to his flight, he could be home in time for a late supper. Just strange, very strange golf from Rory this week.”

And joining McIlroy on his early exit is European Ryder Cup captain, Padraig Harrington, despite a very early Thursday morning 500-km drive, with rounds of 75 and 76, including four birdies, six bogeys and a 12th hole triple-bogey ‘7’, for a nine-over total.

Harrington could not get to the Genesis event quick enough after being cleared to leave his Pebble Beach hotel in the early hours of Thursday morning leaving him around a five-hour drive in darkness to Riviera. He had intended to take a week off before teeing-up in the Arnold Palmer Invitational but has now entered next week’s $US 3m Puerto Rico Open on the Grand Reserve Country Club course at Rio Grande. It will be a first showing in the Puerto Rico Open in what will be Harrington’s 313th PGA Tour counting event.