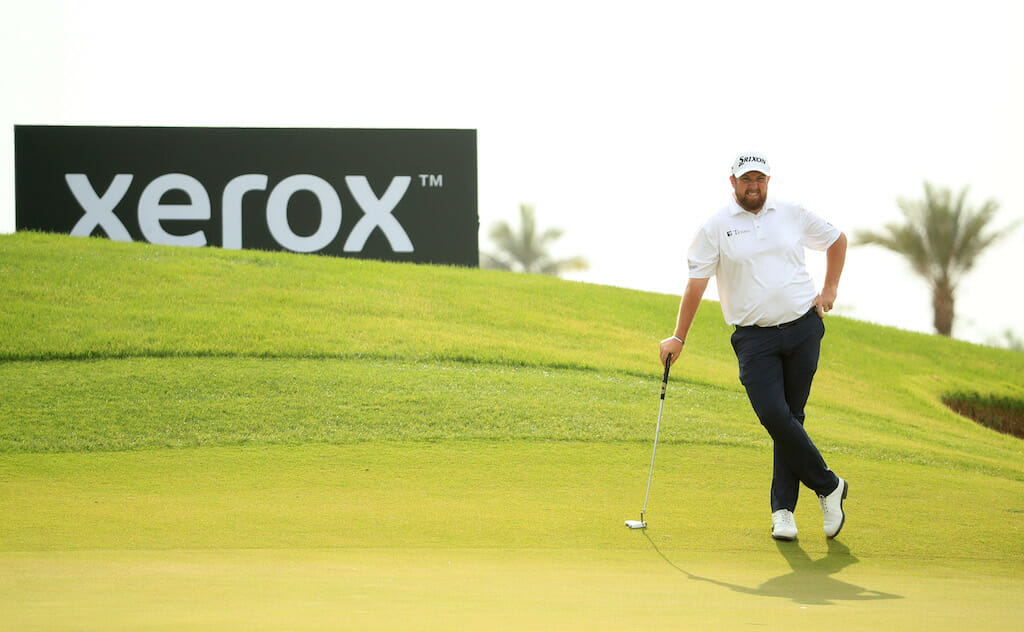 Shane Lowry had a borrowed putter to thank for a much-improved three-under par 17 hole showing as darkness suspended play on day two of the Saudi International.

The Clara star, who endured a miserable run with the putter on Thursday as his early season flat-stick woes continued in the desert, saw a change work as good as a rest as a borrowed putter helped him recover from a second hole bogey to post four birdies in a row from the fourth hole. He dropped another shot at the ninth to be out in 33 before a birdie at the par-3 11th returned Lowry to three-under on the round.

The Open Champion gave another shot back on 13 before making birdie on the par-4 15th for the second day in succession, but after an earlier storm delay, darkness fell at just the wrong time for Lowry who will have to wake up early to play the par-5 18th after failing to complete his second round. It was still a great day for the 33-year old who moved up 36 places on the board to a share of 36th at three-under par, albeit seven shots back of clubhouse leader Ryan Fox, who posted a second 65, and Stephen Gallacher, who’s two-under through 12 holes of round two and also minus-10 for the tournament.

Meanwhile Cormac Sharvin birdied three of his closing four holes in a one-under par round of 69 that will see him safely through to a first pay cheque of the year. Making the most of his Saudi invite, the Ardglass professional, who hasn’t played since a missed cut in December’s South African Open, recovered from being two-over par through 14 holes to be sitting one-under par for the tournament and in a share of 52nd at the weather-disrupted event. Rain is a rarity in Saudi Arabia but it fell throughout the morning at Royal Greens Golf and Country Club and approaching storms brought the players off the course at 12.59pm local time – a loss of two hours and one minute with a 3.00pm resumption.

A second consecutive round of 70 means Graeme McDowell will face an anxious wait as he sits just inside the projected cut mark on the number at evens after trading five birdies with five bogeys on Friday while Paul Dunne, who had the best of conditions in the afternoon part of the draw, was three over on his round through 10 holes and six-over for the tournament when play was halted. It meant Fox was the happiest man in the clubhouse out in front at minus-10.

“It’s been a really solid couple days of ball-striking, and I saw a few putts go in both days, which was nice. To be sitting near the top of this leaderboard is always a good thing. It’s a pretty strong field this week,” said the Kiwi.

“I think we got very, very lucky with the draw. Obviously, no wind yesterday morning and showers that went through with the thunderstorms, and when we came back out, it was pretty much perfect. You don’t often get two days of no wind around here, and it was nice to take advantage of that. And, you know, you get the bad side of the draw enough times, it’s nice to get the good side every now and again.

“As long as I can make my flight on Sunday to make sure I get back into New Zealand, this is what you play golf for, to be in contention. And it’s been a while since I’ve been in this position. And I’ll just go out and enjoy it on the weekend and see if I can keep playing how I’m playing. I know if I do, I’ve got a good chance on Sunday.”

England’s Andy Sullivan (66) and Austria’s Bernd Wiesberger (68) are two shots back on eight under par along with Sweden’s Marcus Kinhult and World Number One Dustin Johnson who have two and four holes remaining respectively. Johnson carded back-to-back birdies just before the suspension to keep on course to extend his impressive record in the event, having won the inaugural edition in 2019 and finished runner up 12 months ago.

Ryder Cup player Tommy Fleetwood (65) and Scotland Callum Hill (68) are in the clubhouse on seven under par, with former World Number One Justin Rose, overnight leader David Horsey and France’s Victor Perez all set to resume their rounds on Saturday also three shots off the pace. Norway’s Viktor Hovland once again underlined his Ryder Cup credentials in the presence of one of Europe’s legendary players, Ian Poulter, carding a four-under par 66  to move to six under.