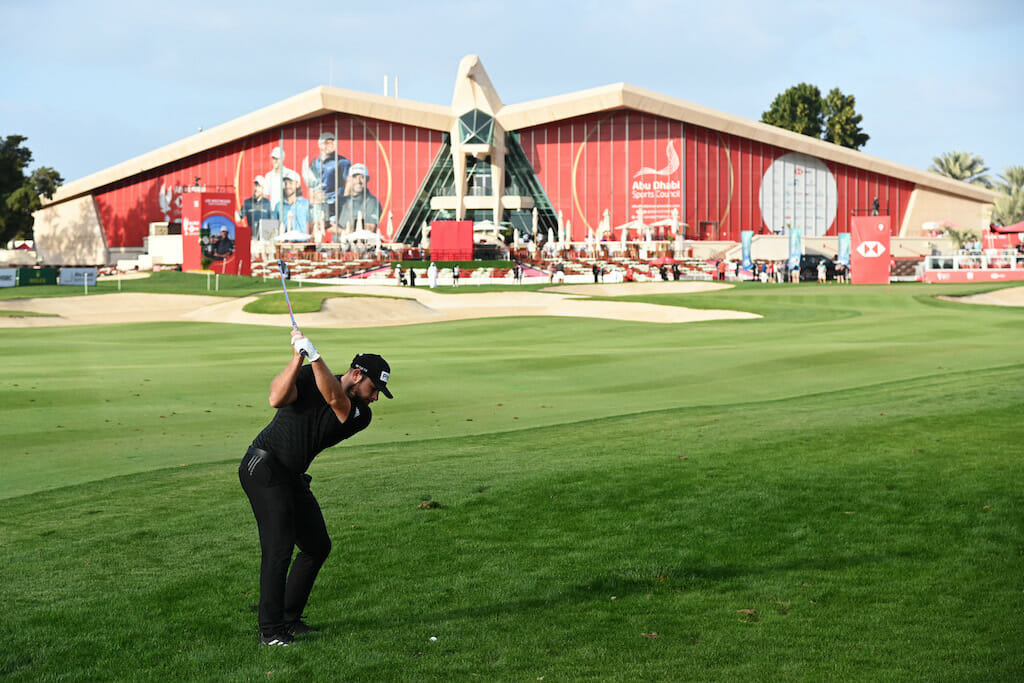 Rory McIlroy painfully had the wind sucked from his new season sails to sink five shots off the lead while Shane Lowry and Graeme McDowell anxiously awaited their fate when poor light halted play on day two of the Abu Dhabi HSBC Championship.

McIlroy was soaring clear of his rivals at 10-under par after just three holes of his second round but as the wind picked-up, the World No. 6 was going backwards to be at seven-over par through 15 holes. England’s Tyrrell Hatton opened-up an impressive five-shot lead, moving to 12-under par and still with five second round holes to play when play resumes early Saturday (UAE time).

“I’m obviously in a great position at the moment. It was certainly tough out there, so I’m really happy to be 5-under,” said Hatton.

“I holed some nice putts and there were a couple par putts toward the end of my round, nice to hold them and keep a bit of momentum going.”

The three-hour opening day delay due to fog meant half the 130-player field, including Hatton and McIlroy, could not finish their second round. McIlroy was officially credited with the first-round lead of an eight-under par 64 and after a long second day wait, he eventually found his way onto the National course to quickly race to 10-under with birdies at his first and third holes though it all turned pear-shape for the four-time major winner in dropping a shot at four for bogey and then after a poor drive at five, walking off with double-bogey.

McIlroy birdied the short eighth for a second day running but slipped further adrift of Hatton with bogeys on 10 and 13 to be two-over for the round. He then dropped back into a four-way share of second place at seven-under par when the siren sounded at 6pm local time to halt play due to darkness.

Both McDowell and Lowry were staring at anxious overnight waits given each were outside the expected one-under par cut-off mark. McDowell was at level par with completed scores of a pair of 72s.

GMac’s first event of a 20th season saw him play just 10 holes on day one resulting in one birdie and also one bogey while his second round was a mix of three birdies and just as many bogeys. In fact, McDowell has birdied the par-5 second hole for his two rounds but also bogeyed the 16th in successive rounds.

“I hit the ball really well both rounds but just couldn’t get a feel of the greens to make enough putts” he said. “For that to be my first two rounds out in my first event of a new season, I am really happy with that. My general ball-striking was pleasing and overall, I did a lot of good things in what was a difficult 36-holes given the fog delay yesterday and also some very fresh breezes.

“So, it has been tougher than I remember this golf course playing but hopefully level par will make the cut as I would really like to sneak into the weekend just to get four rounds in and continue working on the things, I have been working on over the Christmas break and taking into this new season.”

Lowry teed-up on day two playing 11 first round holes of a disappointing 75 and then birdied the last in a second round 70 to be lying at one-over. If he misses the cut, which is likely, it will be a second year running following his 2019 Abu Dhabi triumph that Lowry will sit out the closing two rounds.