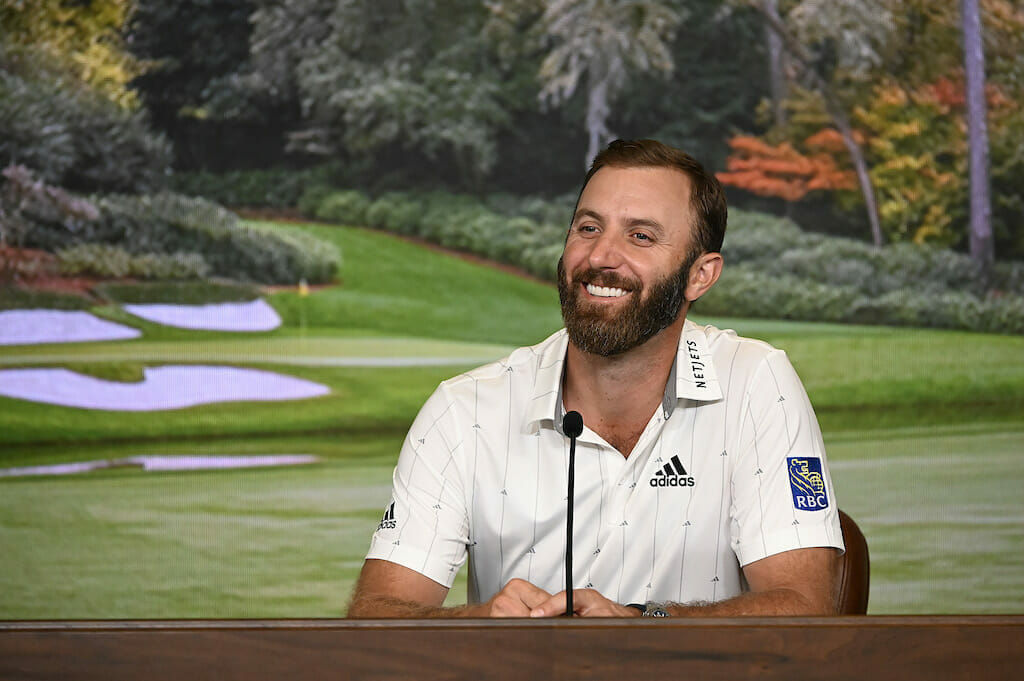 Dustin Johnson during a press conference, during the Masters at Augusta National Golf Club

Back in 2010, I didn’t know a whole lot about Dustin Johnson. Sure, I was familiar with the name, but major championships aside, my weekends didn’t entail a great deal of golf watching. Being in my mid-20s, weekends were for chasing women and beer – and I was a lot more successful in the pursuit of booze – but four times a year (five in Ryder Cup years) I was glued to the TV.

That year’s US Open was particularly memorable. I had a 100/1 bet on Graeme McDowell but a certain big-hitter from South Carolina was threatening to rain on my parade. I’d like to say that I took little pleasure from DJ’s final round collapse, but I was stone-broke and my fiver each-way had awoken the monster inside.

Fast-forward two months and with my bets languishing well outside the money, and with Rory McIlroy coming up just short, I found myself rooting for Johnson at Whistling Straits in the US PGA. Of course, we all know what happened next. Taking a one-shot lead to the 72nd hole, DJ pushed his tee shot a little right, ending up amongst the crowd in scraggly rough in what could almost be mistaken for a large, sand-filled divot.

As the cameras followed an oblivious DJ to the scoring tent where he was met with the news that he wouldn’t be in a playoff after all – a two shot penalty for grounding the club in that oversized divot dropped him to a tie for fifth – I watched through my fingers, expecting the big man to explode, to break down, or to get on his knees and beg.

There are five stages of grief. The first four are denial, anger, bargaining and depression, but to his eternal credit, Dustin appeared to go straight to the final stage, acceptance. I’m not quite sure I’d have made it past stage one, but had I, then a lengthy ban would’ve surely followed the inevitable destruction I’d have wrought in anger on the PGA scoring tent. I was now a big DJ fan.

In a world where so many professional athletes project a false front, there is something refreshingly honest about Dustin. He doesn’t pretend that he’s a modern-day Einstein, devouring a thesaurus before press conferences to appear high-brow, nor does he touch on politics or social issues; he is a golfer, he talks golf, and that’s completely fine. Not that there’s anything wrong with players touching on topical issues, quite the opposite in fact, but they should be comfortable doing so and entirely at their own volition.

Certain factions of the media take great pleasure in the portrayal of Dustin – and brother and caddie Austin on occasion – as being a little dim witted at best, and downright dumb at worst. This is a particular pet hate– and I recently addressed the issue here – especially when a considerable portion of the media aren’t on Mensa’s most-wanted list. The reporter who asked DJ what par was for him at Augusta was a perfect example. Sorry Bryson, it’s 72 for you, and every other player in the field. A concept that Dustin was easily able to comprehend. In fact, Rory McIlroy – widely regarded as one of the more intelligent players on Tour and a close friend of Johnson – has made the assertion that DJ has a lot more going on upstairs than he’s given credit for

Prior to winning his maiden major championship at the 2016 US Open, DJ was golf’s nearly man, not that you’d know it by his own expression. A car-crash final round at Pebble Beach, the infamous grounding at Whistling Straits, one poor drive at Royal St. Georges in 2011, and a 72nd hole three-putt on the cauliflower-like putting surfaces at Chambers Bay would be enough to break the resolve of even the most resolute of players, but time and again, the name “Dustin Johnson” appeared on major championship leaderboards.

Even the manner of his victory at Oakmont in 2016 was incredible. He won by four shots and that included a two-stroke penalty that the USGA couldn’t make their minds up on, prompting Dustin to break the deadlock and request the penalty so that he could sign his card and get on with things.

The nonchalance with which he has greeted crushing defeat and the serenity with which he accepts victory led to questions – valid questions – about whether success or failure mattered that much to DJ. Well, that question was answered with aplomb as a choked-up, tearful Masters Champion spoke to CBS’ Amanda Balionis, freshly draped in the Green Jacket. It took me by surprise, I’m sure it took you by surprise, hell it even took DJ himself by surprise.

10 weeks previously, Dustin won the Tour Championship and with it, the FedEx Cup’s $15 million first prize. In his post championship interview at East Lake, the world number one’s voice didn’t waver, his eyes didn’t well up, it may have been the biggest payday of his career, but it was just a payday. The Masters win was something else, something special, and something that money can’t buy. Just when I thought I couldn’t love him any more….