McIlroy with work cut out to make Masters weekend 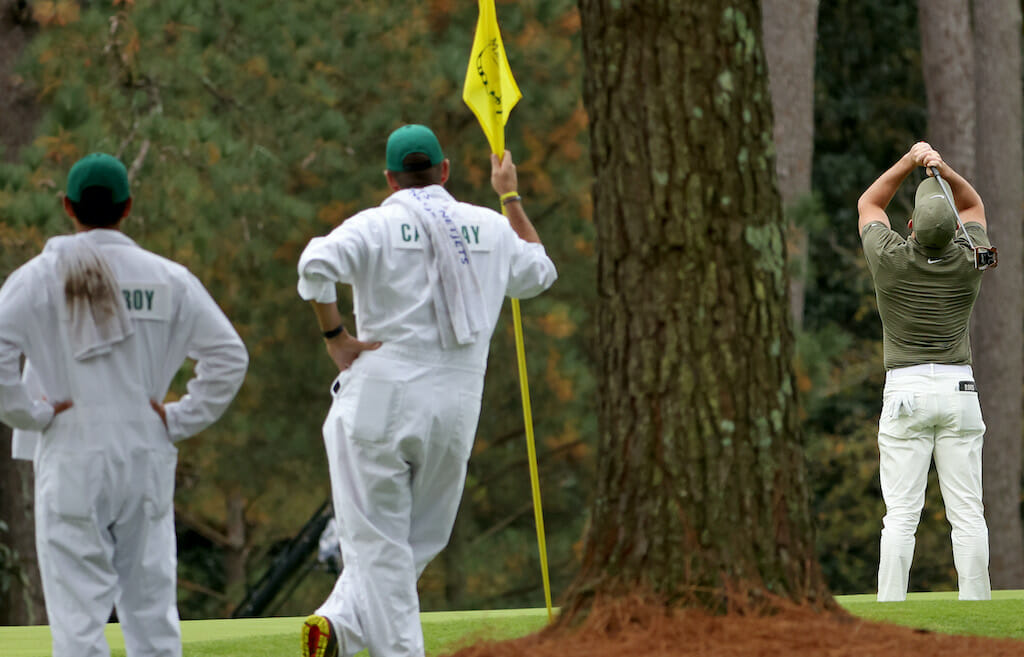 It is an understatement to say that Rory McIlroy now has his work cut out to be assured of playing all four rounds of the 2020 Masters. Eighteen hours and 45 minutes after teeing-off just after 3am on Thursday, McIlroy walked off the 18th green just prior to 10am with a disappointing three-over par 75; his highest opening round in a dozen Masters appearances and a shot more than his first round 74 in 2010.

It left McIlroy trailing 10 shots behind the lead trio of Paul Casey, Dylan Frittelli and World No. 1 Dustin Johnson and with a top-50 halfway cut rule in place this year, McIlroy was sharing 78th place and four back of the expected one-under cut mark. McIlroy had just 30 minutes to grab a bite to eat and tee-off in his second round which is just underway at the time of writing.

McIlroy had played just nine holes of his 43rd round at Augusta National on day one when darkness halted play and he returned just after 7am local time and resumed his round from the green-side bunker on 10 lying level par but seven shots behind England’s Paul Casey safe in the clubhouse with a seven-under par 65.

After failing to get up and down from the bunker, the 31-year old was one-over for his round before making par at both the 11th and 12th holes before the misadventure down the left side of the par-3 13th where the World No. 5 sent his tee shot deep into the bushes. It prompted SKY’s Ewen Murray to remark: “That is way left over Rae’s Creek. It’s deep, dark and it’s ugly. Quite possibly Rory won’t find that one.”

In fact, McIlroy did find it but he didn’t like it and after calling for an official, he took a penalty drop still within the tree line but at least having a shot of getting it back to the fairway. McIlroy, playing a third, did find the fairway and could be heard remarking to the Masters referee: “Sorry to bring you out all the way in here.” The referee was smiling in saying: “Oh, that’s alright”. McIlroy played his fourth onto the green but proceeded to two-putt from 20-feet for a bogey ‘6’ to drop further behind at two-over.

McIlroy had been 22-under par in playing the 13th in his career, easily his ‘favourite’ hole in prior grabbing four eagles and 19 birdies but also just five prior bogeys though that is now six. As he headed to the 14th, SKY’s Paul McGinley commented: “Rory’s now becoming a non-factor and it’s not a surprise. Everyone was saying at the start of the week Rory was coming in under the radar but you have to go to Augusta with good form and Rory has not been showing good form since the start of the year and before the lockdown.”

McIlroy had a marshal jumping out of the way with his drive way left off the 14th but did play a superb shot, picking the gap nicely through trees but then lipping-out for par in taking a fifth bogey of his round. At last, he got off the bogey train finding the green at the par-5 15th after a second shot from a slightly uphill lie in the rough, and while he was some 60-feet from the flag, he two-putted for a birdie ‘4’.

Sadly though, McIlroy gave the shot back at the very next hole finding the water on 16 before playing his third to just off the front edge and proceeding to hole for his bogey ‘4’ but now back to three-over. McIlroy had a regulation par on 17 ahead of splitting the fairway up the last but then more disappointment etched on his face in seeing his second shot land some four-feet from the flagstick but spin back off the green. Then the final insult after a most disappointing 43rd round was McIlroy’s chip shot for birdie hitting the flagstick ahead of a tap-in par.

Rory McIlroy continues to implode on the 16th as he finds the water off the tee! ?pic.twitter.com/dN0B3ImwnE