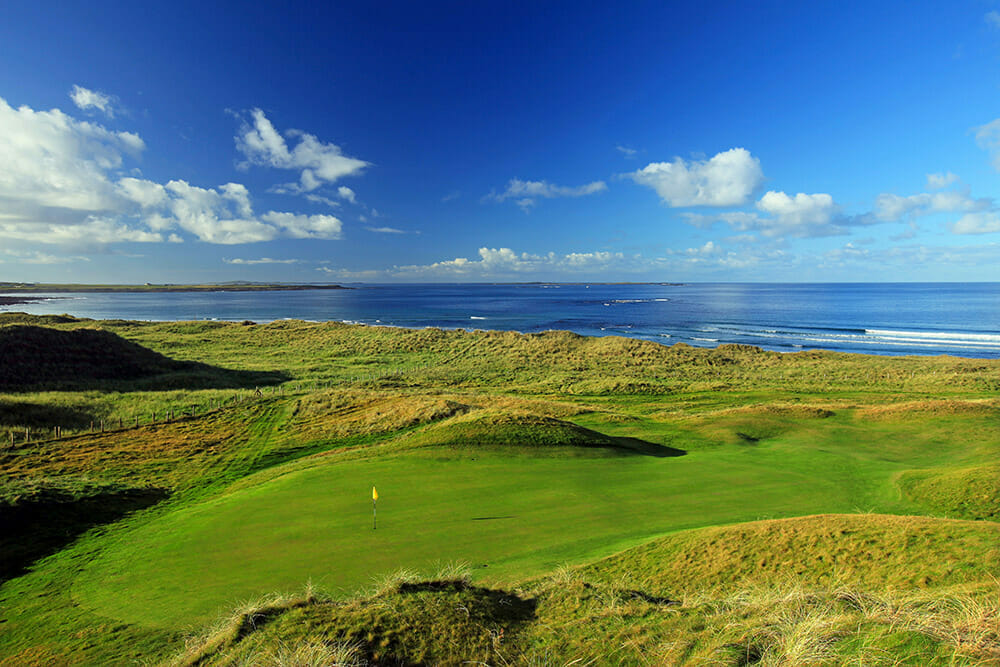 At a time when everyone is moping around at the closure of our golf courses it seems appropriate to reflect on the positives of the year. You might think there isn’t much to be positive about but I would say you are wrong.

Clubs have suffered significantly – specifically those that rely so heavily on golfers from abroad (i.e. our famous links) and on corporate and society outings – but there are bright points too. It all depends on whether you view the glass as half empty (green fee income down, catering decimated) or half full (membership up, number of rounds up, green fees at top venues reduced).

Here’s an example which – by some strange twist of fate – comes from my favourite golf course. In March, Carne Golf Links was in a tough situation as the year’s tranche of international visitors affected by Covid-19 got in touch to cancel or postpone to 2021. Carne may be a big course but it is a small, tight-knit club, lacking the financial resources of the big-name clubs in Kerry and Clare. As a result, the months of spring and summer no longer held the glow of optimism in what would have been the club’s most promising year.

They got fabulous support from Tom Coyne, No Laying Up and The Golfer’s Journal in the United States, as well as similar support at home, and this was vital to the club’s survival and its spirit. You only have to listen to Gerry Maguire’s ‘Pandemic Diary’ podcast with Tom Coyne (The Golfer’s Journal) to understand the anguish being felt in the wilds of Co. Mayo, and the gratitude for the support that followed.

International golfers might not have been able to travel but those in Ireland used the opportunity to make the journey once the restrictions were lifted. In much the same scenario that you don’t visit the tourist attractions closest to you because ‘they’re there and I can go anytime’, golfers had been putting off the trip to Ireland’s most muscular and charismatic links on the edge of County Mayo.

We all discovered that taking a holiday at home became the big buzz, an opportunity to explore far flung locations on the Wild Atlantic Way and elsewhere. Think Carne, think Connemara, think Dingle, think Ballyliffin. These are places we look at and go… “oh maybe next time.” But not this year.

Fiona Togher is the General Manager at Carne Golf Links:

“It really has been a year of change for Carne, and one of the benefits of the lack of international travel has been that our share of Irish golfers increased hugely this year, and their general consensus is that they will be returning to Carne – it was a course that many said they had been meaning to play for years, but felt it was a bit far, but given the circumstances this year they made it part of their staycation and decided it really isn’t that far after all!”

“Six of us were lucky enough to play 27 holes on the 8th of August, just passed. We travelled from Tralee after hearing great things about Carne golf links. What we experienced was something beyond our expectations. A marvelous day out from start to finish. Nathan in the pro shop was extremely patient as I tried to explain to him which way we wanted to play the course. The course itself was magnificent. I have played a lot of golf courses in several parts of the world but I don’t think I ever experienced anything like Carne. It was the most brilliant, challenging, exciting and breath taking course I had the pleasure of playing. The fantastic food and first class service from the bar staff rounded off what was the perfect day and one which will live long in the memory.” (Bryan T)

Add to all this the launch of the Wild Atlantic Dunes course, which combines the back nine of the Hackett course with the new Kilmore nine:

That makes for a rollercoaster of a golf course where you’re moving too fast to get off. It really does feel like you are being thrown into a void of dunes.

“It really has been a year of highs and lows,” says Fiona, “and yet we have just received some fantastic news from the Irish PGA. They have confirmed that the Irish PGA Championship 2021 will be played on the new Wild Atlantic Dunes course, from 4th to 7th August 2021.

It’s a fabulous coup for the club – and an exclusive piece of breaking news for IrishGolfer.ie readers – and, by August next year, one can only hope that things will have returned to some semblance of normality and the days on either side of the PGA Championship will be packed with visiting golfers from around the world… and Ireland.

* Wild Wild West was a 1999 hit for Will Smith, from the similarly named and appallingly bad movie.