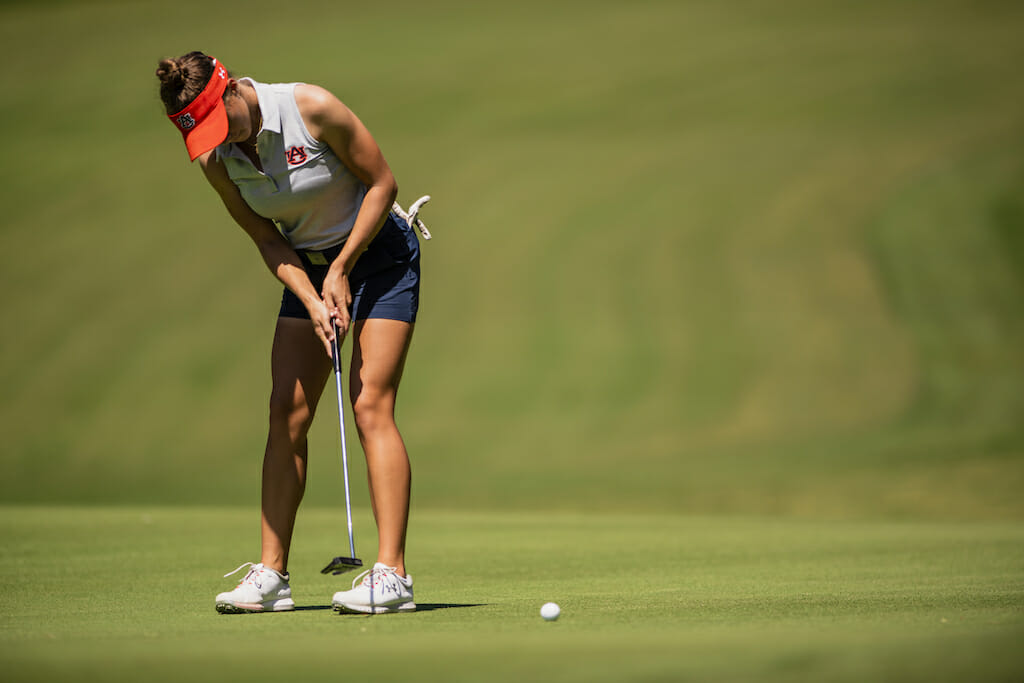 Elm Park’s Anna Foster carded a second round three-over par 75 as fellow freshman, Elina Sinz followed her 68 (-4) from Monday with a second consecutive round under par Tuesday, shooting a 71 (-1) with four more birdies to lead the Auburn women’s golf team on day two of The Ally at Old Waverly.

Sinz, who now has 10 birdies through the first two rounds, is fourth on the player leaderboard.

For Auburn, all five players in the lineup shot 76 or better Tuesday, but the Tigers dropped to fifth at 1-over after carding a 294 (+6) in the second round at Old Waverly Golf Course.

“It was a bit of a disappointing round for the team but a solid round for freshman Elina Sinz,” Auburn head coach Melissa Luellen said.

“The course was scorable today, and I felt like we threw some shots away. We have to be sharp with decision-making and committing to those decisions to post a good, solid round tomorrow. We certainly have the firepower, just need the execution.”

Freshman Megan Schofill, playing in her second season at Auburn, fired a 74 (+2) in the second round with a pair of birdies on the front nine. She’s currently in a tie for 24th overall.

Elm Park’s Foster and Kaleigh Telfer are one shot back of Schofill at 3-over and tied for 29th after two rounds. Foster, making her Auburn debut this week, carded a 75 (+3) on Tuesday with three birdies. She’s second on the team with eight birdies in the tournament. Telfer followed her 71 (-1) from the first round with a 76 (+5) in round two.

Junior Mychael O’Berry bounced back Tuesday, matching Schofill’s 74 (+2) in the second round. It was the team’s second-lowest score of the day. O’Berry is in a tie for 47th overall at 6-over through two rounds.

All 15 teams will tee off at 8:30 a.m. CT on Wednesday for the third and final round. Auburn will be paired with Ole Miss and Alabama. Live scoring can be found on Golfstat.com.