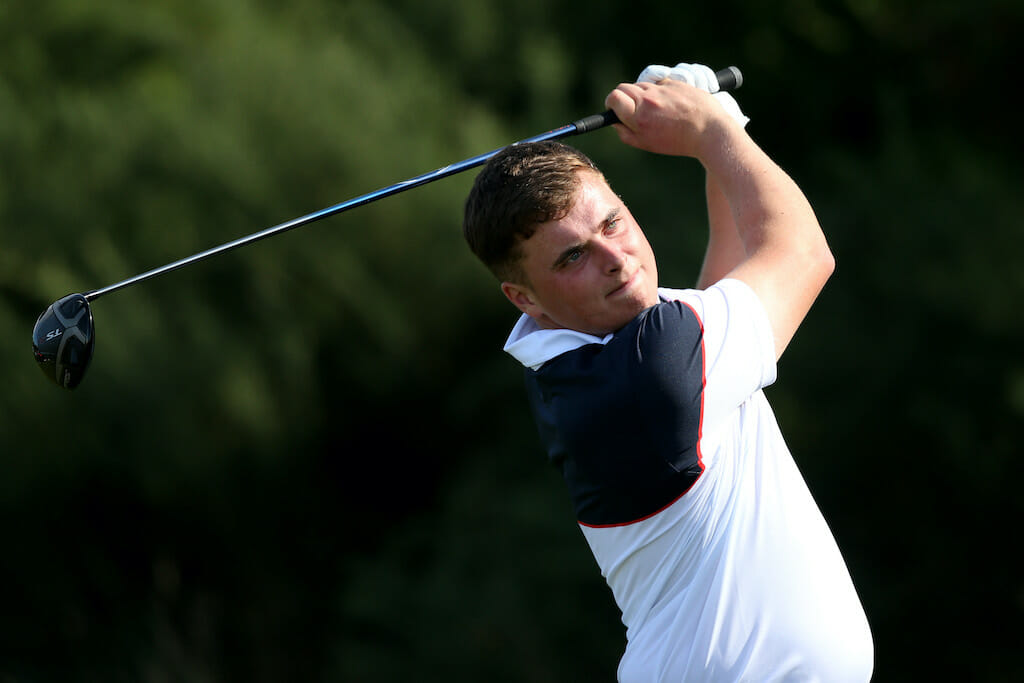 When James Sugrue won The Amateur Championship at Portmarnock in 2019 in front of 3,000 raucous fans, his calendar quickly filled with invites from far and wide.

2020 promised so much, dates to rub shoulders with the pros at The Masters, Memorial and the US Open, all before a certain pandemic reared its ugly head.

Thankfully postponements rather than cancellations have kept the dream alive for the Mallow man and after months of patiently waiting, Sugrue is in New York and about to take on a US Open host venue at Winged Foot that many expect to be the toughest ever.

“It’s very good in terms of the design and the layout of it, it’s brilliant,” said Sugrue, who took a call from us late on Tuesday night.

With a premium on finding the fairway this week, perhaps more than ever, Sugrue has been working with team Titleist in New York, testing out drivers to unearth one that delivers that all important accuracy.

And it’s a good omen that he’s found one. It was the day before that famous run to amateur stardom that Sugrue decided to put a new driver in the bag to help him tackle the iconic links at Portmarnock. Anyone who turned out to watch James progress through the rounds would’ve seen the missile launcher in action; fading bullets, fairway finders that will be worth their weight in gold should this latest weapon reap similar reward.

“I was testing out a the driver with the Titleist lads and I’m going to put it in the bag for the week,” he revealed.

“It just seems to be going a bit straight, higher, and it comes off a bit hotter. You have to hit the fairways. If you don’t hit the fairways, you can forget it because the rough is indescribable… it is proper silage like, you cannot get anything out of it.

“I saw Kevin Na trying to hit a rescue out of it and he hit the ball a yard. It’s proper thick. It’s not like if you hit it into it you might get a lie, you’ll never get a lie. It always goes down!”

Yet, for all the scare-mongering dominating the narrative ahead of this week’s tournament, Sugrue’s perspective is intact.

“As daunting as I’m making it out to be, I’m still looking forward to it – I can’t wait,” he says. Not only that, he thinks the stiffness of the test could actually suit him:

“I think if I play well, it will kind of suit me, especially playing Irish golf all my life on not the easiest courses or set-ups, you know. But it will be important to be patient.”

As for expectation, Sugrue’s embracing the fact that there is none.

“I’m just trying to enjoy myself and I’ve enjoyed myself so far. I play my best when I do enjoy myself and I know it’s hard to enjoy yourself if you’re not playing well but if the worst case scenario is I miss the cut, I’m still over here playing the US Open so it’s not the end of the world,” he says.

“There are a lot worse things happening at the moment around the world than me missing the US Open cut as an amateur. It’s a learning curve, my second ever Major, first one on this side of the pond, it’s a big learning experience so I’m just trying to enjoy myself and hopefully the golf follows suit.”

Far from overawed in the presence of greatness, Sugrue’s stuck to himself since arriving in New York, plotting his own course strategies without seeking the expertise of playing partners who have trod this path before.

“I’ve actually played twice and by myself both times, that’s the way I wanted to do it,” he admits.

“I wanted to do my own thing and not try to please anyone by playing a practice round with a big name just to say that I did back home. I’m happiest on my own.

“I feel like I’m here for ages at this stage without getting going. I was planning on playing 18 yesterday but after nine I was like, ‘no, there’s just no point. I’m just flogging a dead horse here’. I just can’t wait to get started.”

There’ll be no escaping company come Thursday’s first tee time and the young amateur has drawn a jackpot grouping alongside two modern legends of the game, Bubba Watson and Lee Westwood. Although there’ll be no fear of James getting star-struck, the honour of the company isn’t lost on the Mallow man.

“I’m just looking forward to seeing Bubba hit it and obviously Lee Westwood is one of the greatest players of all time to not win a Major. This place will probably suit him as well, drives it pretty straight – and that’s what it will come down to – I can’t get the importance of hitting the fairways through enough. Whoever wins this week will probably have hit the most fairways.”

Let’s hope the new driver behaves itself and we see James Sugrue on our screens this weekend.

He gets his championship bid underway at 5.54pm (Irish time) on Thursday.