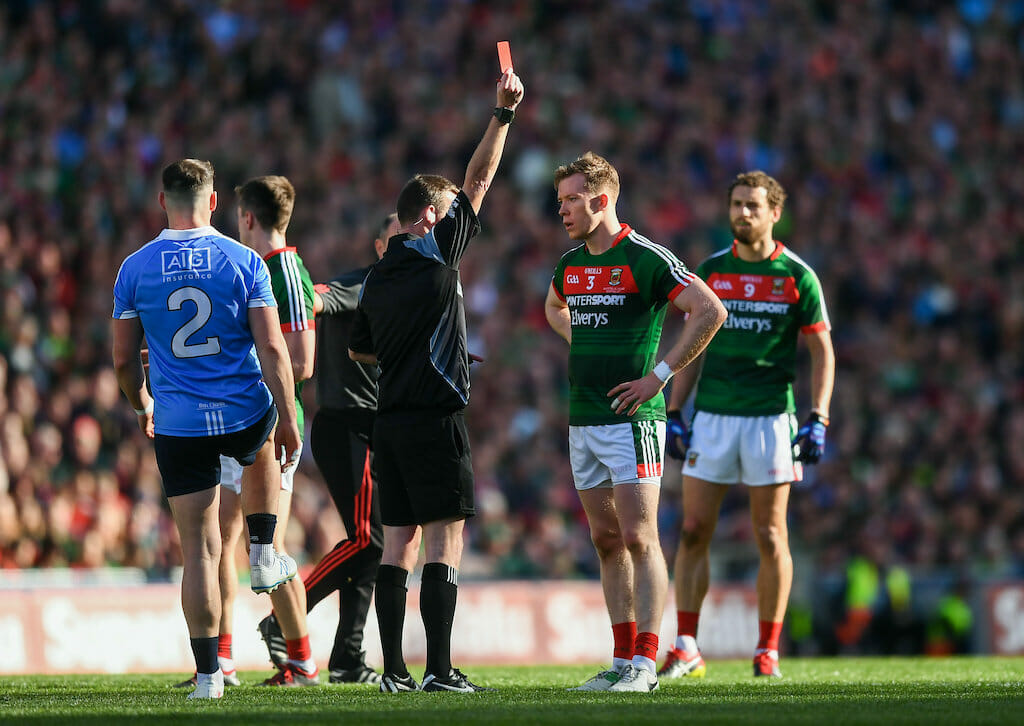 If you’re Irish and not dwelling under a stone, you’ll know this story. Legend has it that following the 1951 All-Ireland Football Final, the victorious Mayo side were travelling through the village of Foxford and failed to pay due respects to a funeral procession that was going through the village. Whether it was the priest presiding over the funeral or a local woman with supernatural gifts is unclear, but as an act of vengeance the team was cursed never again to win another All-Ireland title so long as any of the ’51 panel drew breath.

Almost seven decades later, there is just one surviving member from Mayo’s last great triumph, and they have lost nine finals in the meantime, often in heart-breaking circumstances where they’ve seemingly self-destructed with victory within their grasp.

For the record, I’m a sceptic when it comes to the paranormal and supernatural realms, but I’m also a sucker for a good story, and with each passing summer, the legend of the curse continued to grow. Is it possible that there is actually something to it? There was the equalising point that bounced over the bar in 1996, the two own goals in 2016, the moment of red mist from Donal Vaughan in 2017, somehow the stars have always aligned against the Westerners.

Of course, the logical belief is that coincidence and bad luck are the guilty parties, but even though I think all curses are bullshit, they can still play their part. With margins so fine, if there is a single Mayo player that actually believes the tale, then that player’s decision making and frame of mind are compromised, and can lead them to make rash decisions or to accept defeat a little too easily.

And apologies to the good people of Mayo, but I’d be lying if I said I didn’t take a little sadistic pleasure in seeing the run of failure continue and the saga live to see another day.

Golf’s curse is nowhere near as mythic as the team of ‘51’s tale, but is a whole lot of fun nonetheless. The Shotgun Start podcast is where I first learned that Coco Beach Golf Course in Puerto Rico was built on ancient burial grounds, and to hole the winning putt in the Puerto Rico Open is to doom yourself to an eternity of never winning a PGA Tour event anywhere else, ever again.

Ok, I may be stretching it with “burial grounds” but the law of averages dictates that there must be at least one set of bones in the near 400 acres of land just outside Rio Grande, so I’m going with it.

Names like Alex Čejka, Chesson Hadley, D.A. Points, Tony Finau and Viktor Hovland are among those who effectively nuked their careers by paying disrespect to the ancient Puerto Rican gods. In fact, the only past PR Open winner to win again was Michael Bradley who followed his 2009 win by winning the PR Open again in 2011. So clearly the curse extends to every other golf course in the world, except Coco Beach.

Jason Day, Jordan Spieth, Daniel Berger and Bryson DeChambeau can all look back on their runner-up finishes at the Puerto Rico Open as the day they nearly committed professional suicide.

Ok, so Spieth and Co. were fledgling pros when they dodged the bullet, and being held opposite a WGC, the roll of honour is a who’s who of PGA Tour journeymen, but Finau, and now Hovland, are legit superstars and among the most talented players in the game. Each week that they contend and don’t win is a week that the PR curse is severely put to the test and comes up trumps.

I love Finau, and Hovland seems like a great guy too, but I ‘m also fond of childishly giggling that as ridiculous a concept as a tournament being cursed lives to fight another day.

Mayo may never win another All-Ireland, but the odds are that if they should, that unfortunately Paddy Prendergast will have departed and that the curse will have been lifted, not broken.

Finau and Hovland will win PGA Tour events, and probably soon too, but for now the Puerto Rican curse is very much a thing.

I’ll enjoy it while I can.