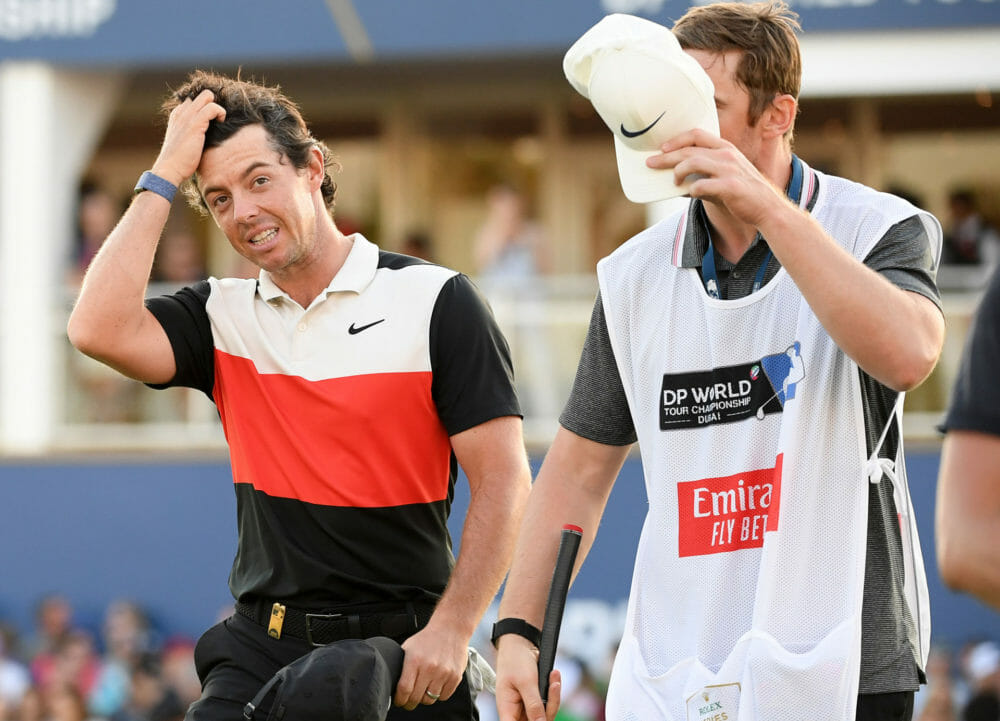 Rory McIlroy and his caddie walk off at the end of the round during Day Two of the DP World Tour Championship Dubai at Jumeirah Golf Estates. (Photo by Ross Kinnaird/Getty Images)

World No. 1 Rory McIlroy was seemingly more excited to be finally getting a long overdue haircut than confirming he will compete in the opening three ‘no spectator’ PGA Tour events.

McIlroy was ‘showing off’ his uncut curly locks on Twitter before heading off to a re-opened barber shop close to his spacious Bear’s Club abode in West Palm Beach, Florida.

And the last thing McIlroy wanted was the ‘butcher’s job’ carried out on the World No. 3 Brooks Koepka by girlfriend, Jena Sim who left the four-time Major winner having to cover his head after a shocking ‘cereal bowl’ cut.

“I’m so happy that hairdressers and Barber shops have opened-up again. I went down for a haircut, and no, I have not let my wife anywhere near my hair since this shutdown,” McIlroy said smiling.

“My hair has been sort of under the hat for a while now, but as you can see, it was sort of covering my face so I was ready for a haircut.”

McIlroy will be among six of the world’s top-10 heading to the June 11th commencing Charles Schwab Challenge at Fort Worth in Texas.

It will be a first appearance for the recently turned 31-year old in the ‘Long Horn’ cattle city with McIlroy to then compete for a second time in his career in the June 18-21 RBC Heritage at Hilton Head.

McIlroy will then head north to the severely Coronavirus pandemic hit New England region of the States for the June 25-28th Travelers Championship in Cromwell, Connecticut where he’s played just once before back in 2017.

“That’s my plan, play the first three and it will be nice to get back out and play,” he said.  “Obviously we’re going to have to take as many precautions as possible to be able to put Tour events on again.

“The Tour has got a very robust plan in place, and if they can execute it the right way, I see no reason why we can’t start June 11.  If we do, I’ll be ready to go in Fort Worth.

“It’s very rare Tour players to have nine or ten weeks at home, and just to be back out there and playing again, I think people are going to be excited for that.

“The people are going to be excited to watch some live golf so I don’t think it will dull it down at all.

“Look, the atmosphere isn’t going to be the same as if there’s, you know, 50,000 people on the golf course, but I don’t think it in any way will take away from the integrity of the competition or the quality of the golf.”

It was also only last week the local Palm Beach County allowed golf courses to be re-open, much to the delight of McIlroy whose only ‘golf-related’ practice during the shutdown was putting into a coffee cup on a rug in his living room.

“Patience has been a big key during this time off.  Just trying to stay as patient as possible,” McIlroy said.

“For a Tour player to spend this prolonged length of time at home, it’s just been all about trying to find ways to fill your time. If anything, I just appreciate the little things, the things that we took for granted before this all happened.

“It’s that stuff that I’m looking forward to get back to. I mean, I didn’t think anything of going and grabbing a coffee first thing in the morning, and now you can’t wait to go and do that. It was like the highlight of the day.

“You just cannot take the little things for granted, as you need to find some pleasure in the small stuff.  I think that’s one thing that I’m going to try to do going forward.”

McIlroy’s unsure when regular caddy, Harry Diamond will return to the States given the young father and fellow Belfast-born may have to quarantine himself for a fortnight while long-time coach, Michael Bannon was smart to cancel a Stateside trip shortly after the Players Championship that was also cancelled back on 12th March.

And while McIlroy and Bannon have been on ‘Facetime’, McIlroy revealed a bizarre parcel from Bannon but not saying the use for the tripod.

“I got a package from Michael the other day, a tripod,” said McIlroy.

“But once we play this event on ‘Sunday at Seminole’, then I can turn my attention to maybe, you know, focusing on the restart of the PGA Tour season and really getting back into it then.

“Michael and I will probably be on FaceTime quite a bit. I’ll be sending him a lot of swings, and you know, we are just going to have to it remotely for the time being which is a new normal for a lot of people.

“As I said, you just have to make the best of it.”

Sunday’s ‘Sunday at Seminole’ will be the closest-ever travel to a tournament for the number one with the ultra-exclusive Seminole club just four miles from the Bear’s Club, with McIlroy driving east along Donald Ross Road, named after legendary Scottish-born course designed who also laid out Seminole, right onto Highway 1.

McIlroy will team with Dustin Johnson in their $US4m charity COVID-19 fundraiser against Rickie Fowler and Matthew Wolff.

“Though we’re playing against — two of the best players in the world, very explosive and can make a lot of birdies.

“It will be the first time for a long time that we are all on a golf course and it’s somewhat competitive, for at least a couple of months.

And while McIlroy’s father, Gerry is a Seminole member and can play as many times as he likes, McIlroy was afforded an invitation to play the course last Friday with the club’s President, Jimmy Dunne along with good friend and Tour colleague, Justin Thomas and legendary New England Patriot, Tom Brady.

“I got out on Seminole last Friday with Justin Thomas and Jimmy Dunne, and Tom Brady who is a new member, actually,” said McIlroy.

“I putted off the fifth green from about 30 feet. If the wind gets up and the greens are as fast as they were last Friday, it will mean birdies might be hard to come by, but there are going to be some chances.

“But it’s going to play fast and fix and looks like it will be a little breezy on Sunday, so it will be a good test for everyone.”