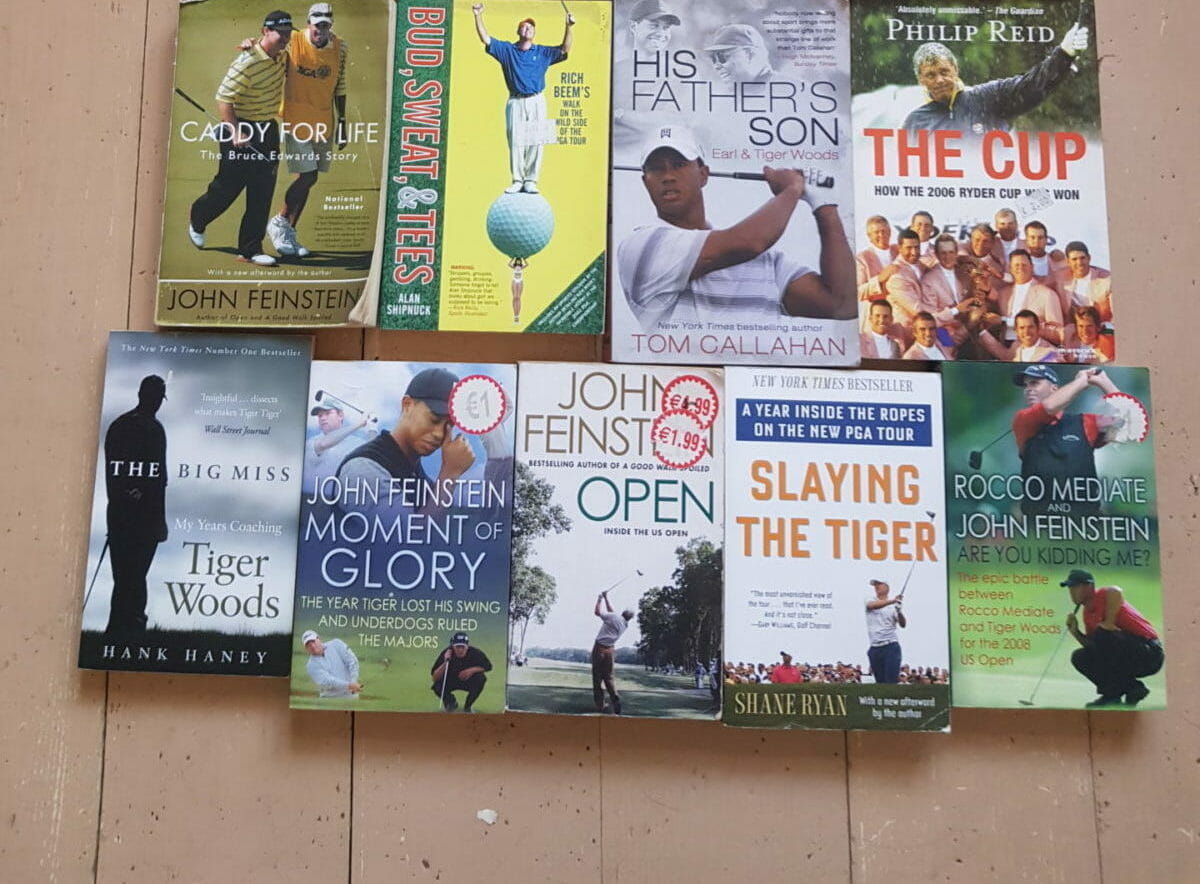 Let me guess, you’ve watched all seven episodes of Tiger King? You’ve started re-watching The Sopranos, or The Wire, or Breaking Bad? Or maybe Friends is your thing? Jigsaws? Maybe it’s spring cleaning? Working out? Pigging out? Vegging out?

I won’t lie, I’m guilty of most of what’s listed above – I say most, but I find working out and pigging out to be counterproductive so I chose to forego one of those, and I’ll let you figure out which has gone by the wayside – but there are still loose hours to fill between scribbling and teaching the odd online class.

With no golf on TV – I find it hard to watch re-runs where all suspense has been removed – and no golf courses to create my own tales of glory and despair – mostly despair, need you ask? – there is still one avenue where I can satisfy my lustful cravings for golf content. Books!

I’ve long believed that reading is not only an incredibly rewarding pastime but is incredibly effective at obtaining some peace and quiet from one’s other half. You see, she likes that I read. She thinks that it makes me seem sophisticated, patient and culturally adept, though she’d prefer I read something like Stephen Covey’s The 7 Habits of Highly Effective People as opposed to my normal fare which mostly covers sport, drugs and serial killers.

And among the sports books are a great many books about golf. If you need a break from Joe Exotic, here are some recommendations for golf-based reading that you won’t regret picking up.

I’ve limited this to eight books, all of which I’ve read and – I hope – cover a wide range of eras and tastes. The list could easily have been three times as long and there are many more on my “to read” list.

And as mentioned above, there’s no time like the present to start.

And in no particular order, my recommendations are as follows…

A deep dive into one of the most fascinating, enigmatic and enthralling figures in the history of sport, Benedict and Keteyian’s work is the quintessential work on the life of Tiger Woods. Often painted in an extremely unflattering light in terms of his behaviour and demeanour on and off the course, Woods somehow comes out the other side as a piteous character, though the same can’t be said for Earl Woods, Tiger’s father.

Whether you can look beyond the string of infidelities, the sense of entitlement, and the ruthlessness conveyed by the authors and still cheer for Tiger the golfer is up to you, but this book provides a unique insight into the way a child prodigy became the most dominant force in the history of golf.

One of America’s greatest sportswriters, A Good Walk Spoiled was Feinstein’s first foray into the world of golf – thankfully not his last – and the result is an incredible work detailing the “days and nights on the PGA Tour” in the early ‘90s. Given unrivalled access, Feinstein opens doors to a world that golf fans had never before seen.

From millionaire superstars like Greg Norman, Tom Watson and Nick Faldo to relative journeymen like Paul Goydos and Brian Henninger, Feinstein documents the countless and lonely hours smashing balls at a range, to travelling all over the country and the world, struggling on mini-tours, living out of a suitcase, and ultimately, the glory or pain of success or failure. You won’t want to put it down.

Though Rich Beem is quick to point out that Shipnuck is the author and that Beem didn’t receive any royalties from the work, he did sit for countless interviews as a young Shipnuck documented an only slightly older Beem’s rookie year on the PGA Tour. The on-course drama is fantastic, but the true majesty of this book are the tales of what lies beyond.

One of the wilder characters on tour, and no stranger to bars and strip clubs, Beem’s tale is incredible in itself, but it’s Beem’s former caddie Steve Duplantis who arguably steals the show. We all know a Steve Duplantis, he is a human train wreck with a heart of gold.

Haney had the seemingly insurmountable task of taking the world’s greatest golfer, who had done the unthinkable and held all four major titles at one time, and improving his swing. The Big Miss is a rare insight into what it is like to work with one of the most complex, driven and enigmatic talents in world sport.

Not always complimentary, but seldom unfair, Haney takes us behind the curtain of Woods’ practice sessions, shows us his belief, his military obsession, and his determination to eradicate that most punishing of golf shots, the big miss.

Men in Green by Michael Bamberger

I haven’t yet read Bamberger’s The Second Life of Tiger Woods which was released last week, but if it’s anything like Men in Green then I’m in for a treat. Here, the long-time Sports Illustrated writer examines golf’s golden age of the ‘50s, ‘60s and ‘70s, with occasional reference to the stars of the modern game.

18 unique stories make up the front nine (some of the biggest names in golf) and the back nine (lesser known, but arguably more interesting characters, including caddies and other non-playing insiders) as Bamberger and sidekick and former PGA Tour pro Mike Donald’s exhausting trawl bring these legends of yesteryear into our living rooms.

My dog’s favourite book. I was ninety percent through when my nine-month Bernese Mountain Dog pup decided to show his appreciation for O’Connor’s work by ingesting it page by page. And of course, he started at the back.

Jack and Arnie, of course, tells the story of Palmer and Nicklaus, their co-existence, their rivalry and ultimately, their friendship. As beloved as Jack is in the game nowadays, it wasn’t always so, with Arnie’s army – as the Palmer enthusiasts were known – rightly sensing the threat Nicklaus posed to the man affectionately known as The King. Not Palmer himself, however, and O’Connor wonderfully illustrates exactly why The King and The Golden Bear are arguably the greatest on-course and off-course ambassadors the game has ever seen.

Slaying the Tiger: A Year Inside the Ropes on the New PGA Tour by Shane Ryan

If A Good Walk Spoiled was the premier inside account of the Tour Pre-Tiger, then Slaying the Tiger is the equivalent in the post era. Forget connotations that the title conjures, this is in no way derogative of Woods nor a decry of the possibility of his return to the top of the game, instead, it’s a glimpse at the young pretenders to Tiger’s throne throughout the 2014 season.

As a word of advice, American libel laws being considerably less punitive than ours, the American version contains a chapter on Patrick Reed’s college days that is missing from the European version, and in light of Reed’s recent legal action against Golf Channel’s Brandel Chamblee, probably a wise decision on Ryan’s part.

Four Iron in the Soul by Lawrence Donegan

Donegan’s light-hearted memoir of a year spent caddying for Journeyman Scot Ross Drummond on the European Tour differs wildly from the books detailed above. A columnist for The Guardian at the time, Donegan had no prior experience as a looper and somehow manages to convince a young aspiring pro to let him be his wingman – or bagman, more accurately – for a season that coincidentally, happens to be arguably Drummond’s finest on tour.

This is not a story of success, obscene wealth or untamed luxury, rather, more a charming and often hilarious peek at the vagabonds, misfits and diamonds who make up the other half.

Commander in Cheat by Rick Reilly

My most recent golfing read, I really should place an asterisk beside Commander in Cheat because it says a lot more about a man than it does about golf. Which of course was Reilly’s intent. Reilly has long been one of the game’s greatest game-piece writers, so often eloquently – and occasionally brutally – breaking down a week’s play and carving out masterpieces that are as enjoyable to read today as they were at the time.

Commander in Cheat is very different though, and is an examination of how Donald Trump’s ethics in and around the game of golf are applicable to his ethics in the wider world. Though a little repetitive, the sheer scale of Trump’s underhanded dealings on and off the course is staggering, as is his penchant for self-adulation, for hypocrisy and delusion of grandeur. Basically, everything you expect and a whole lot more.