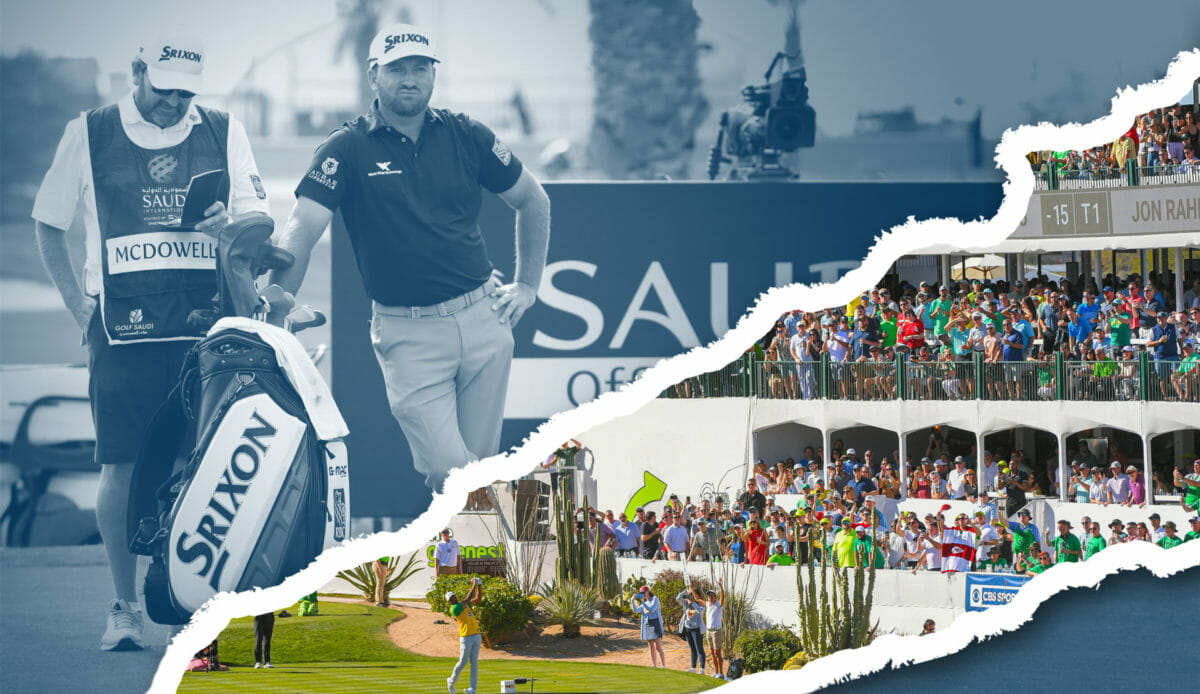 The Waste Management Phoenix Open and the Saudi International. Two golf tournaments on the world’s premier tours, two deserts converted to lush green complexes, and two high quality fields. And yet, has there ever been a greater disparity in overlapping sporting events in recent memory? It’s highly unlikely.

Though exact attendance figures are no longer released, an estimated 700,000 spectators arrived at TPC Scottsdale last year, with more than 200,000 streaming through the gates on Saturday alone. And this year seemed little different. The Phoenix Open is by a distance, the most popular event on the PGA Tour rota and shows no sign of abating.

By contrast – and there is zero chance of official figures being released by the European Tour – fans at the Saudi International were glaringly conspicuous by their absence. It seemed almost comical to hear players shout “fore” following wayward shots, only for television cameras tracking the ball’s flight to show a lone marshal in the vicinity.

Packed galleries have never been a feature of golf in the Middle East, but at least in Abu Dhabi and Dubai there is always a scattering of spectators on every hole, with sizeable crowds following the marquee groups.

The Phoenix Open has created a niche following that bears greater semblance to a stag party than to a golf gallery, and every year the legion of frat boys guzzling beer from morning to evening grows. At $13 a can, it is hardly a cheap day out, so fans seem determined to be as loud as they can be, be as obnoxious as they can be, and to remember as little of it as they can.

In King Abdullah Economic City, no amount of money will allow you to buy a beer at the golf course or in any other legitimate business place. One of the few countries left that still has a blanket ban on alcohol, the black market is the sole refuge for those desperate to get a taste and undercover reports suggest that bottles of wine cost more than $200 and harder liquors go for twice that, and even then you are risking severe punishment for possessing contraband.

Of course, given the debauched scenes in Arizona, the Saudis may feel justified but that’s another argument for another day, but it’s not just in attendance and manner that there were distinctive differences in these two tournaments.

In Phoenix, Tony Finau – widely regarded as one of the most talented players in the game – was living up to his reputation as one of the worst closers in golf. The big Utah man of Pacific Island descent is insanely popular, but despite being ranked as high as ninth in the world, he still has just one PGA Tour win to his name; the opposite field Puerto Rico Open in 2016 with the top 64 in the world off competing for the WGC Match Play title.

Unlucky as Finau was that Webb Simpson closed with two birdies in regulation before birdieing the first playoff hole to pick his pocket, Finau’s failure to close the door places another question mark beside his credentials. Blessed with natural athletic power, and a wizardly short game, Finau seems to tick every box required for a serial winner and a major champion. Every box but one. Killer instinct.

In contrast, a few hours earlier, and some 8,000 miles away, one of golf’s most ruthless assassins was after claiming his 16th professional victory. Though ten years Finau’s senior, Graeme McDowell has never possessed the weaponry that the American does, but when it comes to killer instinct, there is arguably none better. Playing a golf course tailored to long hitters, G-Mac was the Joker in the pack. The four-way tie for second of Dustin Johnson, Phil Mickelson, Thomas Pieters and Gavin Green tells you all you need to know about the Royal Greens Club course. All bombers, and all outplayed by the plucky Irishman with an acute nose for blood.

McDowell’s ability to get the job done is perhaps best shown in his incredible playoff record. Six times the Portrush man has gone to extra holes and five times he has come up trumps. That’s an 83 percent success rate that rivals all except Tiger Woods, who incidentally fell to McDowell in the Chevron World Challenge playoff in 2010.

Given G-Mac’s closing ability, Finau would be a serial winner and may even have a major to his name. But given Finau’s power, McDowell would have a lot more.

A stark contrast, and very fitting for the week that was in it.