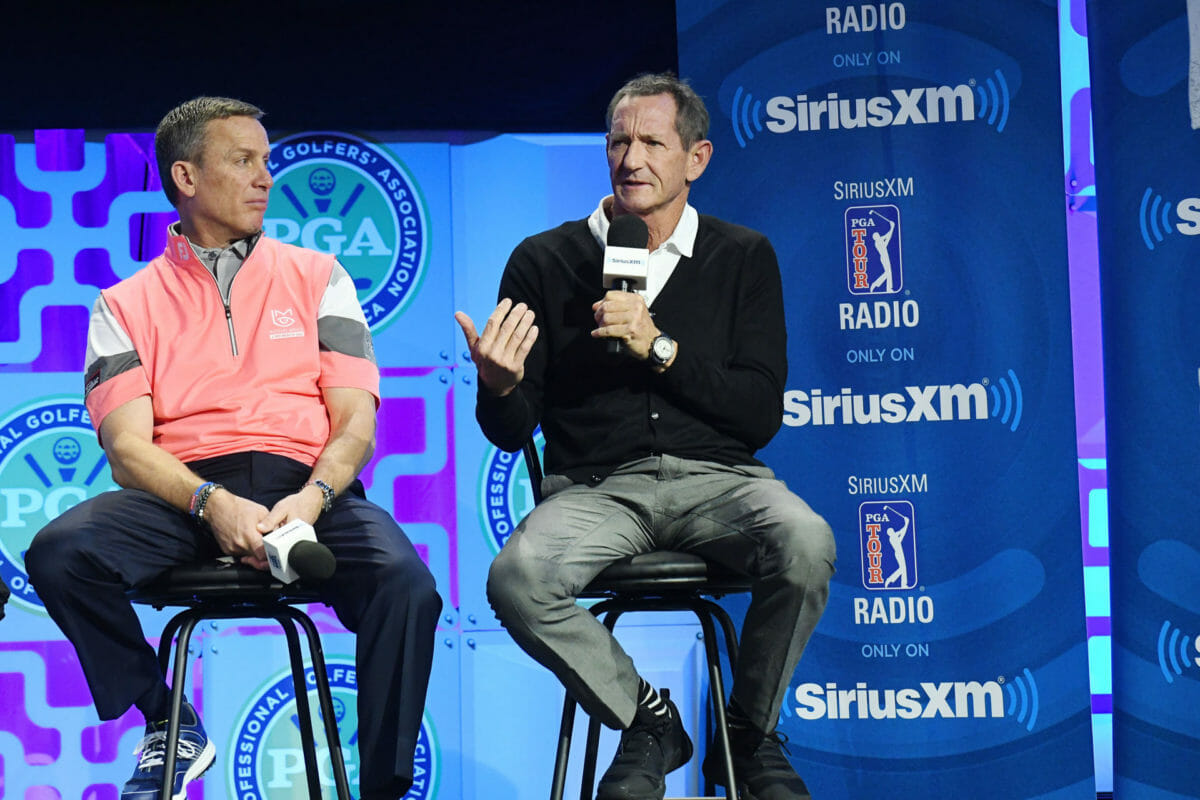 Michael Breed (L) and Hank Haney on the SiriusXM Town Hall at the PGA Merchandise Show on January 24, 2019 in Orlando, Florida. (Photo by Gerardo Mora/Getty Images for SiriusXM)

Tiger Woods’ former swing coach, Hank Haney has been enduring the wrath of the internet for the past few days after coming out with this live on his radio show ahead of last week’s US Women’s Open:

“I’m gonna predict a Korean,” Haney said, when asked who he thought would win. “I couldn’t name you like, uh, six players on the LPGA tour. Nah, maybe I could. Well, I’d go with Lee, if I didn’t have to name a first name, I’d get a bunch of ‘em right.”

Haney’s comments were immediately condemned by disbelieving listeners wondering if he knew what the flashing red light in studio meant, but as word filtered through to the swing guru about the gaffe, his immediate backtracking proved futile. Haney took to twitter later that day to voice his remorse:

“This morning I made some comments about women’s professional golf and its players that were insensitive and that I regret. In an effort to make a point about the overwhelming success of Korean players on the tour I offended people and I am sorry.”

Days passed and though an unsurprising number of yokels with their ‘Make America Great Again’ profile pictures aired their support for Haney, the golfing public came down hard on Hank.

“As a Korean American female golfer, these comments disappointed and angered me on so many different levels,” said Michelle Wie. “Racism and sexism are no laughing matter Hank… Shame on you.”

Haney was swiftly suspended from his anchor role but as the internet hurled their knives at Hank, life threw him a bone. As luck would have it, a Korean did win – Jeong-eun Lee6 – the sixth of her name. And suddenly the contrite, sheepish radio personality bolted out of hiding.

“Congratulations to Jeong–eun Lee6 on your great win at the US Women’s Open. I knew you’d win. Who’s The Great Predictor now Steve Johnson.”

Forget about Steve Johnson, whoever he is. It doesn’t take a crystal ball to predict that Haney’s days on radio are coming to an end. To borrow an expression from former US President, George W. Bush:

“There’s an old saying in Tennessee — I know it’s in Texas, probably in Tennessee — that says, fool me once, shame on… shame on you. Fool me — you can’t get fooled again.”

Well Haney’s managed to make a fool out of himself, twice; doubling down on a potentially forgivable display of ignorance with a mind-numbing exclamation point that should prove his ultimate undoing. How a man working in media could be so out of touch with the world of today is frightening.

Golf above all sports has been forward-thinking in plugging the gender gap that for too long has persisted. Events like the Mixed Jordan Open in April and the new World Invitational set for Galgorm Castle this summer are landmark occasions promoting gender equality and equal opportunity and even if you can’t get behind their intentions, in Haney’s case, you’d at least pretend to go along with the movement in the best interests of your own employment.

“[You] Just can’t look at life like that. And he obviously said what he meant, and he got what he deserved,” said former pupil, Tiger Woods.

To which Haney replied; “Amazing how [Woods] has become the moral authority on issues pertaining to women.

“I spent six great years coaching Tiger, and not once did he ever hear me utter one sexist or racist word. Now, in addition to being a 15 time major champion, I guess he thinks he’s also a mind reader?”

But this isn’t about a generation of snowflakes taking umbrage to a comment that may have gone unpunished in years gone by. It’s a stand against a remark so out of touch with modern society that its place within it should be permanently removed. Of course, PC has gone mad when comedians have to apologise for jokes made on stage, but Haney’s comments aren’t founded in comedy. They’re tragic, dumb, ill-informed, sexist and borderline racist.

If golf’s going to remain forward–thinking, regressive minds like Haney need to have their platform pulled from under their feet and their views forever flushed down the toilet. Let’s just hope Mr Hankey doesn’t smear the bowl on the way out.