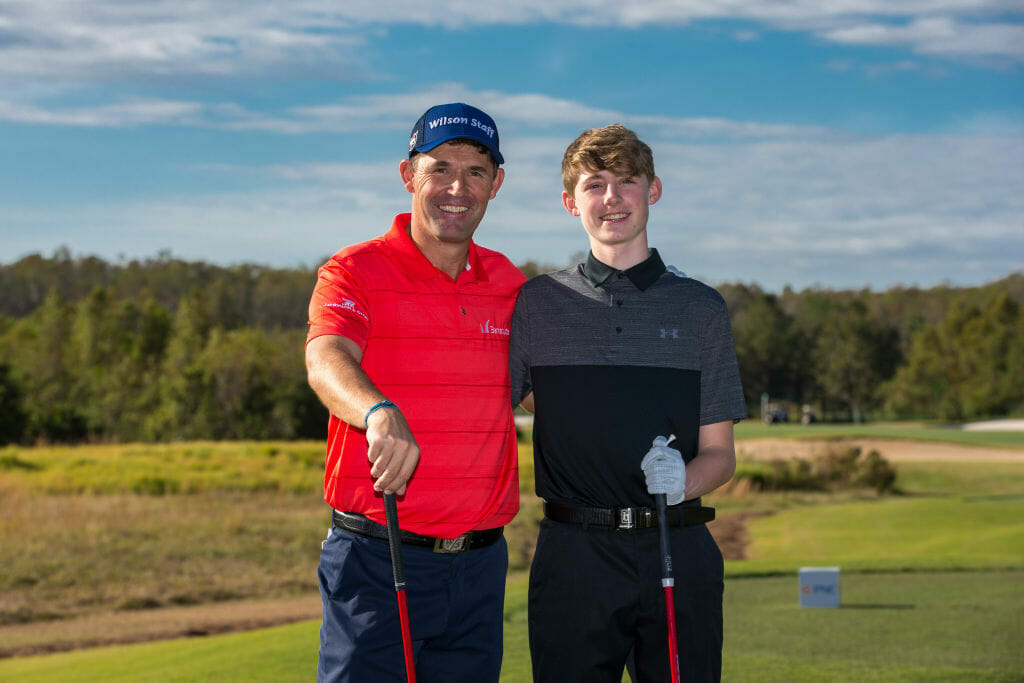 Darren Clarke and his son, Tyrone gelled well to produce a nine-under par 63 on the opening day of the PNC Father and Son Challenge in Orlando, while Padraig Harrington admitted his 15-year old son, Paddy ‘carried’ their team.

The Clarke’s were five-under through eight holes and then birdied their closing two holes to be sharing sixth place, five shots adrift of ‘Team Goosen’, the pair of double US Open winning Retief and his son, Leo.

The Goosen’s were six-under par after nine holes and then remarkably birdied their last eight holes for a two-shot leading cushion over ‘Team Langer’ and ‘Team Duval’.

The Harrington combination produced four birdies from their third to eighth holes before grabbing four further birdies over their closing five holes in an eight-under par 64 on the Ritz Calton Golf Club course.

“The way we played we could have got it to 10-under or 11-under which would have been great but then looking back we were only four-under through 13 holes so to birdie four of the last five holes put some nice respectability to the round.”

The Harrington’s are teeing-up in the 20-team event for a second occasion in three years after having had to sit-out the tournament a year ago as Paddy was undergoing school exams.

Naturally, Paddy was looking forward to returning and was pleased too to play well in the company of his European Ryder Cup Captain father.

“I thought we may have shot a much lower score but I am happy with the how we played,” said Paddy.

And Padraig paid his son a big compliment in saying:  “Paddy played well and he was consistent, keeping the ball in play which means I could go for the greens a bit more, and he putted well.

“I didn’t hole a putt all day.  Not one single putt so any birdie putt we holed it was Paddy.  I holed none, so of the eight birdies, I holed none.

“So, he did his job and I would have liked to have done a little bit better.

“It is actually nice when your son actually plays better with a bit of stress, a bit of pressure so that is a good sign.  Certainly his game has improved so much in two years.

“And he played in the spotlight today and he only got better when the cameras came around.  We saw the camera’s about the fifth hole and those are the things you watch for in your son as to how much the handle the spotlight and the pressure.

So, he did very well and played nice.”

Check out the full leaderboard HERE