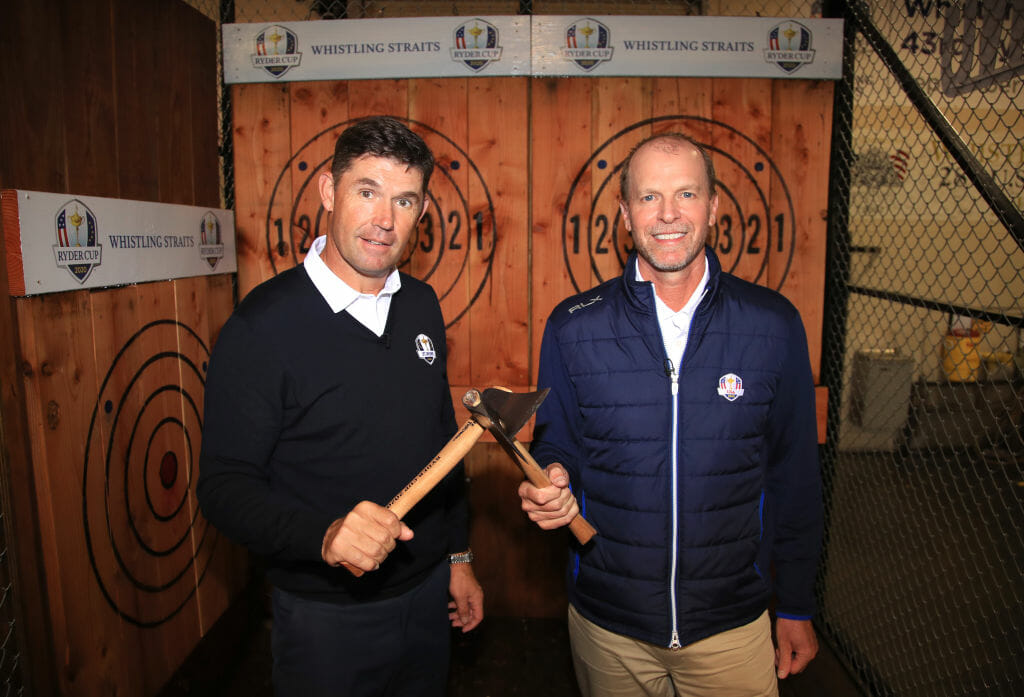 European Ryder Cup captain Padraig Harrington has stolen a 12-month advantage over USA team rival Steve Stricker after winning a Ryder Cup replica made of ‘Wisconsin Cheese’ in a bizarre ‘double or nothing’ axe throwing contest at Whistling Straits.

Wisconsin-native Stricker first hosted Harrington to a 14-club challenge on the par-3 17th hole that is laid-out along the Lake Michigan shoreline in what was a final get-together for the 2020 team captains in a five-day ‘Year to Go’ celebration.

The 14-club challenge, played in very overcast and mist-laden conditions, involved each player selecting seven clubs from driver right through to a putter, and scoring a win if finding the green.

Harrington lost the toss, though questioned if it was a ‘Wisconsin coin’ given it had a head on either side and the American, wasting little time, went 1up thanks to landing his 6-iron on the green.

Harrington missed with a 7-iron with Stricker then going 2up hitting his third shot, a 4-iron, onto the green.

Harrington then missed with a 5-iron and a 4-hybrid leading Stricker to remark: ‘Have you managed to hit a green yet?’ ahead of the Dubliner missing with his fourth shot, a 2-hybrid.

Harrington finally got on the board to be 1-down with his sixth club, a driver only for Stricker to win the friendly encounter 3 & 1 when he struck his final club, a Gap Wedge onto the green.

It would be a one throw ‘double-or-nothing’ for a replica of the Ryder Cup made of cheese and donated by Harrington.

Stricker quizzed:  “What sort of cheese is it, Padraig?”   Harrington joked:  “Wisconsin cheese”.

Stricker found a portion of the inner circle before Harrington stepped-up to a score a bullseye and the retain the cheese trophy.

“Bullseye. In there and that’s a winner,” said Harrington.

The duo were then observed tucking into the cheese and wishing each other well in a year’s time.

“It’s nice to be with you, Padraig,” said Stricker.  Harrington responded:  “Good luck to you and I hope we can have a great match.”