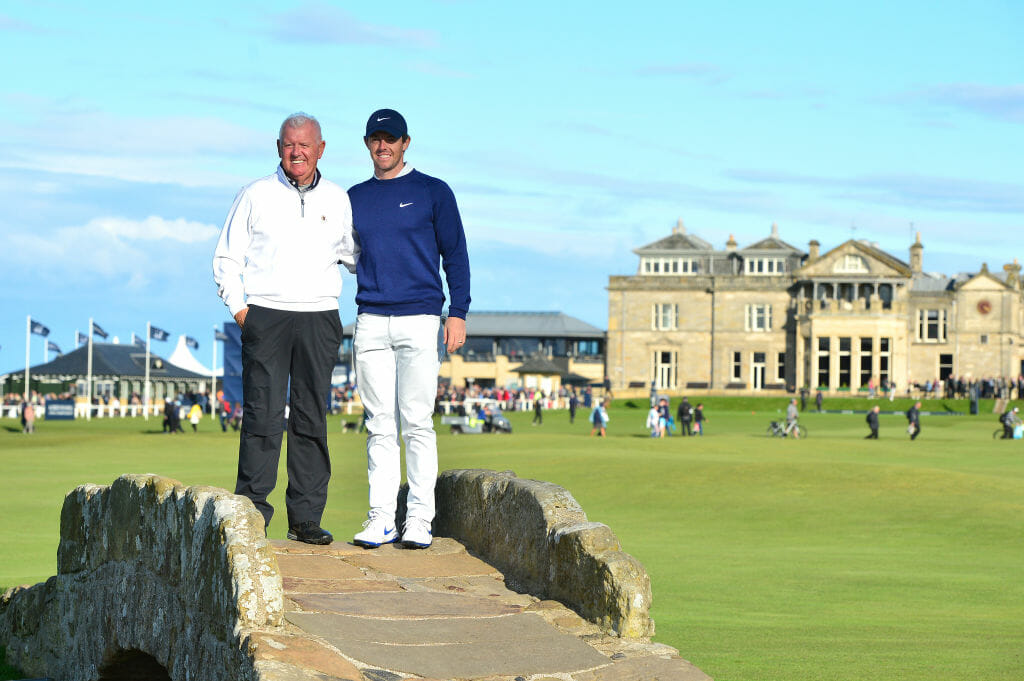 Rory McIlroy’s Scottish jinx will continue, but he’s determined to see he and his father Jerry, who celebrated his 60th birthday this week, capture the team event at the Alfred Dunhill Links Championship at St. Andrews.

Individually, McIlroy struggled on day three in the bright but windy conditions on the Old Course as he posted a two-under par 70 for a 10-under par tally which sees him in a distant share of 40th place, ten shots off the lead.

It’s a far different story in the team competition with the McIlroy’s sharing third place at 28-under par just a shot off the leading duo of Italian Andrea Pavin and his amateur partner, followed by former European No.1 Tommy Fleetwood and his playing companion.

The McIlroy’s have combined well over the three days, posting three net eagles (two of those thanks to Gerry), along with 23 birdies, with 10 of those birdies, including four in succession mid-round on Friday at Kingsbarns Links, also the work of Gerry who is a two-handicapper who acts as Chairman of the Rory Foundation.

The duo have also had just one bogey and that was at their seventh hole at Carnoustie on Thursday.

McIlroy commented: “I know I am too far back to win the individual title but I am so excited for tomorrow as it is going to be great for dad and I to go out and have a real chance of winning the team event.”

“Of course, it would be great if I won a first Dunhill Links and we picked-up the double in winning the team prize but knowing that it is not going to happen, what a 60th birthday present for my father if we were to win the team event.”

“So, it’s all about the team and I just want to go out and play well for my dad and hopefully we have a chance.”

This week’s Alfred Dunhill Links appearance is McIlroy’s 15th pro tournament on Scottish soil and the closest he’s come to tartan success is runner-up at the Dunhill Links in 2011 and 2013.

McIlroy’s own third round was a mix of four birdies and half as many bogeys and he said: “I just didn’t manage to get anything going today.  It was tough going out but then a lot easier coming in, and I had loads of chances.”

“I’ve struggled also on the three host courses as there is no flow on the greens, and they’re just hard and that makes it hard to get a grasp of the speed, and because of the speed they just don’t turn as much.”

“So, it’s just hard and that’s been the story of my week but, and as I said, it’s now about celebrating my dad’s 60th in a very special manner.”