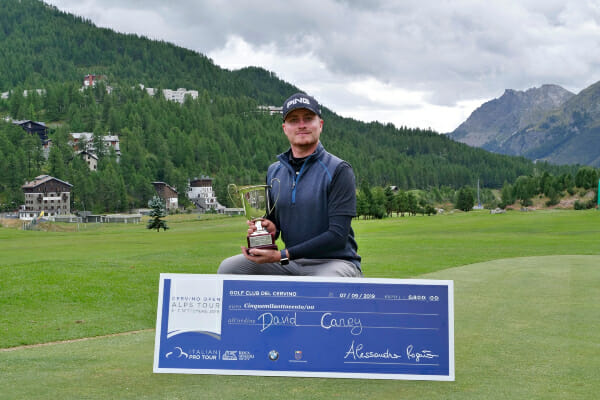 Castleknock’s David Carey held his composure to claim a first professional victory in dramatic fashion at the Cervino Open in Italy.

In a week that started with an unforgettable eleven-under par 57, Carey was always in command until Italian, Edoardo Lipparelli birdied his 54th hole to draw level at the death.

That saw the leading duo tie atop the board at 13-under par at the end of regulation play, with Carey’s second successive one-under par 67 sending the match to a sudden-death playoff.

With momentum seemingly on the Italian’s side after Carey finally found himself caught at the head of affairs having led for so long, the Dubliner wasn’t about to give up on his search for a maiden professional title.

Sure enough, Carey held firm, completing his Italian job to win the title in extra holes, bringing about a huge moment in the career of the fledgling pro.

“I shot a 57, I won the play-off, things couldn’t be better. Everything together is just perfect”. said Carey

Carey collected a significant cheque worth €5,800 for the result and moved 26 places up the Order of Merit table to 12th. Having teared the course apart to post 57 on day one, a shot lower than Jim Furyk’s PGA Tour record low of 58 at the 2016 Travelers, staying in the now was always going to prove tricky after such a thrilling start.

A lull in scoring was inevitable but winning in the way he did, showing his mental fortitude to rise again in the playoff against Lipparelli, will undoubtedly prove invaluable as Carey looks to take the next step in his professional development. Congratulations David!

Meanwhile, in a great week for Ireland’s raider, Naas professional Jonathan Yates squeaked a top-10 finish despite only managing an even par 68 to close out the tournament.

Peter Dallat finished in a tie for 21st at four-under par after posting a final round 70 while Michael Dallat (even par) and Simon Bryan (+2) completed the Irish scoring.