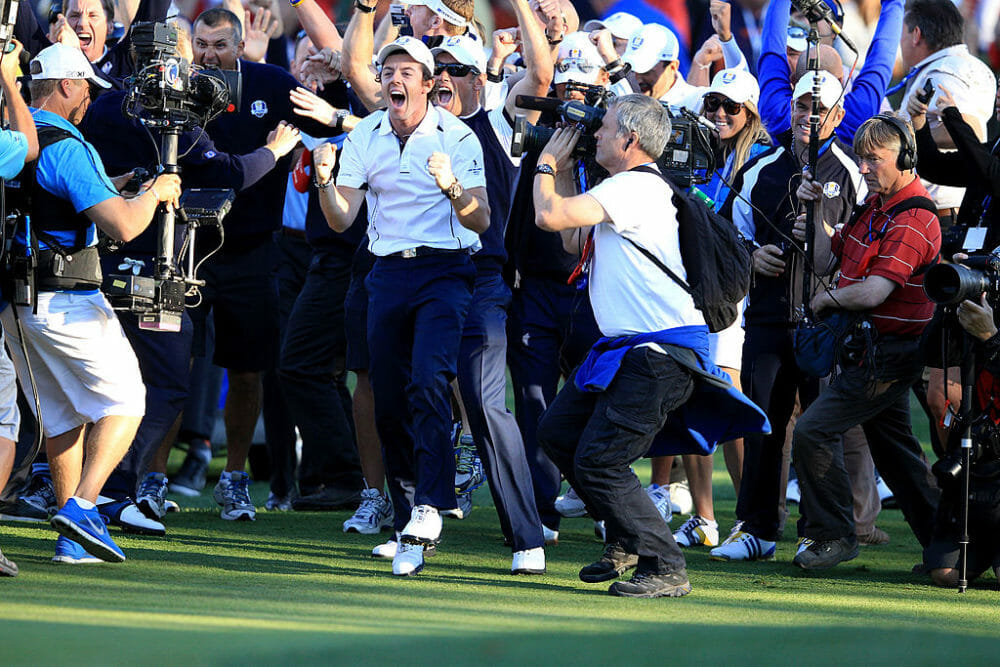 The last time Rory McIlroy was at Medinah he arrived in a ‘sirens on’ police car.

Not that McIlroy was under arrest but the story goes that he slept-in, got his time zones wrong and it was his future wife, Erica Stroll who was working with the PGA of America’s transportation division at the then 2012 Ryder Cup who arranged to get him to the course on time.

It was Sunday morning of the Ryder Cup and with Europe trailing 6-10 heading into the Singles and Erica had not yet met McIlroy but she pulled a few strings in hastily arranging for a local district police car to meet McIlroy at the team hotel and rush him to the course.

McIlroy had to drastically cut short his intended practice in arriving at the course just 10-mins before tee-off in the third match of the day against Keegan Bradley but remarkably, McIlroy won his match 2 & 1 and lifted the overall score to Europe 9 – USA 10.

It was all part of the ‘Miracle of Medinah’ which unfolded as Jose Maria Olazabal’s men, clearly inspired by the late Seve Ballesteros, dramatically and emotionally retained the Ryder Cup 14.5 to 13.5.

Ian Poulter, who had inspired Europe’s fightback in the final match a day earlier, now owns the police car having purchased it at auction and it comes then as no surprise that McIlroy has returned to Medinah looking to “rekindle some fond memories”.

“Medinah has got some good memories for me,” said McIlroy. “Unbeknown to us at the time, but it was where I met my wife for the first time.

“It was an incredible Ryder Cup with everything that happened there.

“We have been sort of excited to get back there all year. If I play this week how I played at Medinah that week, I’d be very happy.  I played some great golf.”

Only four members of that 2012 victorious Euopean Team – McIlroy, Poulter, Justin Rose and Graeme McDowell – are returning to Medinah for the $US9.25m BMW Championship.

The World No. 3 will tee-up after after finishing four shots behind Northern Trust winner Patrick Reed in the first of the FedEx Cup play-offs as he dropped from second to third on the FedEx Cup standings.

“Even if I’m not playing that well I’m still able to get myself somewhat in contention,” McIlroy said.

“Even when one part of my game is off, I am sort of making up for it with other parts of my game, whether it be driving, chipping or putting.

“The good stuff is in there; I’m just hitting too many loose shots and they are costing me.